THE TRAGEDY CAUSED BY THE TSUNAMI IN South Asia continues to rally the world community in support of the survivors. But while aid has been flowing in to help them, the American Anti-Slavery Group has sounded an alarm concerning the well-being of thousands of orphaned children, now homeless and displaced, without family to care for them—and even worse, at risk of being abducted and sold into slavery. Birgithe Lund-Henriksen, child protection chief in UNICEF's Indonesian office, holds grave fears that criminal gangs in her country will use (and already are using) the atmosphere of chaos to kidnap these children.

Such calls from child protection groups have led Indonesian officials to ban the departure of children from the country. In addition, police officers have been placed in some Aceh refugee camps on the Indonesian island of Sumatra. TV reports in my hometown in Australia also indicate that government agencies in several locations have begun registering orphaned children so their whereabouts can be monitored.

As I noted in a recent article in this magazine ("Worldwide Crisis: Prayers Needed," January 17, 2005) child slavery—in particular, forced labor and sex-slavery—is already prevalent in Asia. While I'm pleased to see the action that's currently being taken to protect the tsunami orphans from being traficked, will it be enough? Is there more that can be done to protect these children, who have already endured so much suffering and loss?

As someone who has faith in the power of prayer to help in times of crisis, I have been thinking about what I can do to help. Although I can't gather up all these dear children and personally keep them safe, I am taking steps right now which I believe can help them.

THE AMERICAN ANTI-SLAVERY GROUP HAS SOUNDED AN ALARM.

• I'm praying specifically that the orphaned tsunami children will be treated with dignity and respect by the people around them; that all those who cherish young ones will keep guard over them; that aid workers, locals, and others on the ground will be alert to any danger that threatens the children's well-being.

• I'm refusing to ruminate over and speculate about the disaster and the dire things that could happen to these young people, or question whether God can protect His children from harm. Right now, the pressing need is to pray for the well-being of the surviving tsunami children. I'm maintaining my faith that God, whom I know as divine Love, is caring for all children—in South Asia and the world over. Now is not the moment for me to join in with what some newspapers are describing as a "crisis of faith" in the churches. Divine Love did not cause this disaster. It's not punishment for anything anyone has done, or a result of their Muslim, Hindu, or Christian faith. Now is the time for me to stay strong in faith for all those who survived the tsunami tragedy—especially the children.

• I'm affirming that God never stops fathering and mothering His/Her children. That He/She is caring for, guiding, and accompanying them. In God's sight, no child is therefore left "alone." Each one has his or her divine Parent present. Divine Love cares for them so very much. Recognizing this, I'm praying to keep them safe.

• I'm contributing what I can to the relief effort. Humanitarian aid helps restore order. While turmoil can provide criminals with the opportunity to perpetrate evil acts, normalcy and order can provide children with a safer environment. That's why, in addition to giving, I'm praying for order to be reestablished. God's intelligent, wise ideas are available to guide all those assisting the survivors.

My continuing prayer is for the children who have lost their human parents, that they feel the comforting love of milions of people around the world who yearn to help them. And that they see evidence of their heavenly Father-Mother's love in the compassion and kindness—and prayers—of those who are helping them to be safe. 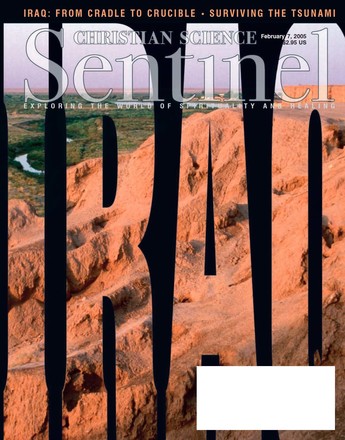 A THOUGHT THAT MADE A DIFFERENCE

IRAQ: FROM CRADLE TO CRUCIBLE

THE KENYAN CAPTIVES IN IRAQ

By Patricia Kadick with contributions from Robert Nofsinger | February 2005

A WALK ON THE SAFE SIDE

'I KNEW THAT GOD'S HEALING POWER WOULD PREVAIL'