The “leave” victory—and its implied economic and cultural consequences—was a shock to many, and there has been much speculation and debate since then about where UK politics is heading. However, instead of getting mesmerized by the turmoil of uncertainty, it is more helpful to prayerfully realize that God’s good governance is all that is present and has power. By turning our own thoughts prayerfully to the one Mind, acknowledging and accepting the one God as the only true cause, as the only real power governing everyone, we are acknowledging the supremacy of God’s ever-present law, which is at work in human consciousness and which brings whatever adjustments and leavening of thought are needed to best support progress for everyone.

Although no one can ever truly be outside the scientific relation of God to man, the physical senses seem to aggressively argue to the contrary. It’s so important to remember that the material senses present an inverted view of spiritual reality—they present man as being separate from the infinite abundance of God’s goodness and one person’s welfare as often being at odds with another’s.

In the wake of the referendum, we can continue to pray to know that God’s man is spiritual and at one with his creator. In spiritual reality, no one anywhere could ever be outside that relationship. The more we lift thought prayerfully to behold the reality of man as totally spiritual, supplied by God with spiritual ideas that bring daily supplies, the more readily will policies come to light that can promote the unfolding in human experience of this spiritual reality.

Spiritual vision is needed in order for people to truly prosper and progress.

Regardless of the leanings of a particular governing body, or the circumstances those in positions of authority have to contend with, we can pray to know that divine Love is truly in charge because Love governs all reality. We can hold to the conviction that every individual, as God’s reflection, is at one with God and with all of God’s children. Such spiritual vision, consistently held to in prayer, can bring to light human solutions that are widest in their embrace of all involved and have the fewest downsides.

A passage in Mary Baker Eddy’s Miscellaneous Writings 1883–1896 can be useful to pray with: “God gives you His spiritual ideas, and in turn, they give you daily supplies. Never ask for to-morrow: it is enough that divine Love is an ever-present help; and if you wait, never doubting, you will have all you need every moment. What a glorious inheritance is given to us through the understanding of omnipresent Love! More we cannot ask: more we do not want: more we cannot have” (p. 307).

The writer of Proverbs warns, “Where there is no vision, the people perish” (29:18). Spiritual vision is needed in order for people to truly prosper and progress. Having spiritual vision, seeing everyone as held in God’s care and guided by divine Love, we can increasingly trust God’s government concerning the issues involved in the referendum, such as the economy and immigration.

There are those on both sides in the referendum conversation who have spoken of the importance of looking beyond just one’s own personal needs to help the wider world community, our neighbors near and far. We can prayerfully support this view, which includes the desire to contribute to the betterment of the world and to grow in our faith in God and our expression of spiritually-based values. The referendum has also emphasized the need to acknowledge, and prayerfully and practically address, the needs of those in the UK who feel marginalized and left out by policies that would seem to penalize them while benefiting other countries.

Through yielding our own thought to God’s government, and seeing everyone as under God’s government, we are supporting the demonstration of this government on earth. This takes form in legitimate needs being met. With humility and gratitude we can honor the spiritual relationship we all have to God, and open our thought to proving step by step that “whatever blesses one blesses all.” 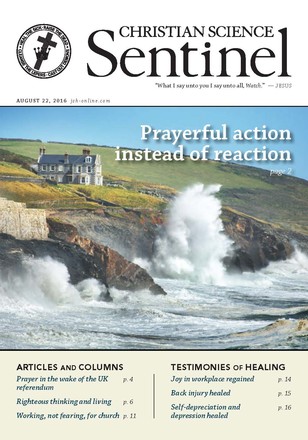 Prayerful action instead of reaction

What I learned about Truth’s healing light

Working, not fearing, for church

I could love him no matter what!

'The river of His pleasures is a tributary...'

The crown and the cross