What makes people feel they will be subject to contagious diseases? Or, for that matter, to the contagion of violence, hatred, envy, revenge? The articles that follow explore answers to these questions. They also tell how a deeper understanding of God can change one's whole outlook on health. No matter how persuasive news reports of approaching epidemics may seem, under God's power, the power of divine Truth, we can gain lasting freedom from contagion.

Most people think about contagion in connection with disease and illness. Some believe they will catch a cold or flu every winter, others have been warned that an epidemic of a contagious illness may be imminent, and some are so involved with hygiene and health laws that they see danger of contagion in just about everything.

For still others, thinking about contagion is their business. In this group are public-health officials charged with dealing with communicable diseases and those whose business is to discover, manufacture, or market the vast array of products aimed at controlling or preventing them.

Illness isn't the only thing blamed on contagion, though. News stories often encourage us to think of suicide, violence, and rebellious behavior as contagious. It can all seem very persuasive.

How should we think about contagion? First of all we need to remember that Christ Jesus healed illness of all kinds, from the most virulent to the simplest afflictions. He understood God, not disease, to be the supreme power. Through his life and ministry, he showed that there is no basis for either physical causation or effect. He said, "It is the spirit that quickeneth; the flesh profiteth nothing" (John 6:63).

Contagion need not strike fear into our hearts. God is the only Mind and creator, and He made us to be His pure and perfect children. Thus the truth is that we already dwell in harmony with God—"in the secret place of the most High ... under the shadow of the Almighty" (Ps. 91:1). When we understand this, and the fact that man has a permanent, unbreakable spiritual relation to God, Mind, we will see that neither we nor anyone else can have a mind separate from God. We will no longer think of ourselves, or others, as mortals subject to all the whims of mortal thought. We will understand that contagion is mental, not physical, in nature, and that man is no more subject to contagion than God is.

Neither hatred, violence, nor disease is found in God's kingdom. In an article titled "Contagion," Mary Baker Eddy explains how this mental influence comes into being. She says: "Floating with the popular current of mortal thought without questioning the reliability of its conclusions, we do what others do, believe what others believe, and say what others say. Common consent is contagious, and it makes disease catching" (Miscellaneous Writings, p. 228).

The assassination of Israeli Prime Minister Yitzhak Rabin is an extreme example of how one type of contagion, the poison of hate, can spread in thought. Only hours after her husband's burial, Mrs. Rabin put this tragic event in focus. Noting the violent and inflammatory talk of those opposed to her husband's policies, she said on Israel Television, "There definitely was incitement which was strongly absorbed and found itself a murderer ..." (Chicago Tribune, Nov. 8, 1995). This assassination may have been contemplated for some time. There was widespread talk of murder, and religious extremists openly prayed for Mr. Rabin's death. Just days before the assassination, some even distributed leaflets calling for "angels of death" to strike Rabin down. The unfortunate assassin and his accomplices fell victim to the poisonous contagion of hate and fear. Hate-filled thought aimed at the death of Mr. Rabin ultimated in the assassin's bullet.

The assassination of the Israeli Prime Minister is an extreme example of how one type of contagion, the poison of hate, can spread in thought.

The general fear of contagion and the influence of graphic advertising spread in the unsuspecting and unprotected thought in the same way. These mental impressions, not germs, viruses, or other material elements, result in the spread of disease. Fear of microbes, viruses, weather conditions, personal contact, and so forth can find expression in illness just as surely as a hate can find expression in violent actions, even murder.

As we understand more of spiritual causation, however, we are equipped to demonstrate more the truth of Jesus' words "the flesh profiteth nothing." And we will no longer fear contagion. If contagion has found a foothold in our lives, we can reject it as an impostor, just as the mother of a sixth-grader did when her son became ill with chickenpox one Thursday evening.

After talking with the boy's teacher, the school nurse reported to the mother that his teacher was concerned because the following week was the last week of the school year and the boy needed to be present for examinations to determine his promotion to the junior-high-school level. There would be no opportunity for him to take them at another time. The nurse, knowing the mother was a Christian Scientist, asked if there was any possibility that her son could be back in school by Monday, even though it was already Friday. The mother, feeling the nurse expected her to pray and to have good results, said she would see what she could do. She asked a Christian Science practitioner to give treatment to her son, and the advancement of the symptoms immediately stopped.

The mother knew, though, that she couldn't place the full responsibility for healing on the practitioner. She said, "I realized that I had to take a strong stand against the aggressive belief of contagion. I firmly declared that my son's true identity was the image and likeness of God. Therefore, he could not be subject to disease. I saw clearly his innocence and purity as God's beloved child. I also prayed to know that there is no power that could keep him from being in his right place." On Monday he was well, and the school nurse sent the child back to his classroom. She said that all danger of contagion was gone.

To heal and to prevent contagion, we need to pray, as this mother did, by starting with God and what we know of Him. Prayer founded on a clear understanding that God, Spirit, is the great and only cause, that He is infinite Love, the only Mind and intelligence, is effective. Mrs. Eddy points this out when she says, "If we follow the command of our Master, 'Take no thought for your life,' we shall never depend on bodily conditions, structure, or economy, but we shall be masters of the body, dictate its terms, and form and control it with Truth." She goes on in the next paragraph: "There is no power apart from God. Omnipotence has all-power, and to acknowledge any other power is to dishonor God" (Science and Health with Key to the Scriptures, p. 228).

Once the truth of God's omnipotence is established in our thought and we understand that God is the only Mind and intelligence—the one true consciousness—we cannot be affected by influences such as contagion. Man's relation to God as His beloved son is permanent, perfect, and unbreakable. Thus, the reality is that man has no consciousness capable of being the victim of contagion.

As we increase our understanding of these ideas, we will have better health and will be free from contagion.

The following, from the pen of the Rev. Mary Baker Eddy, appeared in the Boston Herald on the 17th inst.:—To the Editor of the Herald:On the subject of reporting contagion I have this to say: I hav...

A writer responds to concerns about the threat of SARS in her family and her community.

Overcoming the fear of contagion

As our horses walked calmly along the trail, my fellow riders and I enjoyed a fun spring outing. Then, suddenly one of the horses spooked for some unknown reason, swerving and bolting frantically d... 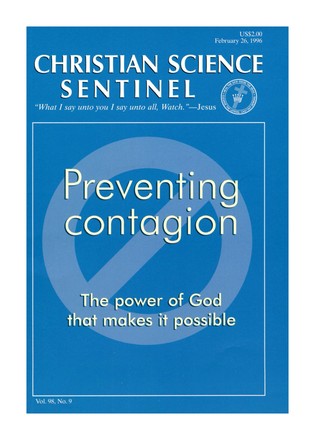 Closing the door on contagion

You can choose health

Praying for victims of tragedy

To understand and feel God's presence

Here and there and everywhere

What are the real demands on us?

The Bible and the healing of young people

Is it possible for you and me to see a "burning bush"?

Is there a superior race?

Better service—what's at the heart of it?

I would like to give thanks for a healing that occurred around...

Science and Health explains, "The way to extract error from...