The world needs more givers. People who contribute in ways that improve the quality of life in their communities; volunteers who help people in need; individuals who support charitable and educational organizations.

Some people are setting aside time and devoting themselves to helping others where and when they can. But many others aren't taking part in their communities, their government, their churches, their schools. And a recent study conducted by United States Treasury Department economists shows that newly wealthy Americans are much less philanthropic than their predecessors. There is concern that this may indicate a decline in the notion of stewardship. "In Today's Aging Audiences, Arts See a Cheerless Tomorrow," The New York Times, February 12, 1996.

Some may wrongly believe that to be a giver means ultimately to incur loss. Or, that someone who withholds what would benefit others is benefiting himself or herself by that much more. It is important to understand, however, that doing good for others is not a loss-producing endeavor. Neither is it truly beneficial for one to be miserly with the good he or she could be doing for others. A careful look at the Bible's message shows that giving blesses the giver as well as the receiver. "He which soweth sparingly shall reap also sparingly; and he which soweth bountifully shall reap also bountifully," says a New Testament writer. The instruction continues, "Every man according as he purposeth in his heart, so let him give; not grudgingly, or of necessity: for God loveth a cheerful giver" (II Cor. 9:6, 7).

Another lesson learned from the Bible is that giving is natural. That's because man is actually the image of God, who is the giver of all good. Christ Jesus showed that to live one's life from this basis—reflecting the nature of God, divine Love—was naturally to be unselfish and charitable, blessing others whenever possible. This includes healing the sick through the power of God. Jesus said, "Heal the sick, cleanse the lepers, raise the dead, cast out devils: freely ye have received, freely give" (Matt. 10:8). Freely giving, joyfully giving, describes what God created man to do. It's what He impels and loves man to do. The more unselfish and charitable we are, the more we are responding to the divine impulsion, and the more we feel God's love.

Consider the incident in the Bible of the poor widow who donated two mites, or copper coins. to the treasury. It was a relatively small amount. The woman could have reasoned that such an amount wouldn't make a difference, so why give. Or, that by keeping what she had she would be better off. The point is, she gave. More to the point, her heart and mind were open to the thought that giving in this way was right and good. That's really at the heart of the divine message, that it's natural to do good. And, as Christ Jesus pointed out to his disciples, "This poor widow hath cast more in, than all they which have cast into the treasury" (Mark 12:43).

Clearly, it's not enough just to say that one is open to this transforming message, any more than it's enough for someone to say he or she is hospitable simply because that person has a mat on the porch that says WELCOME. The need is to pray earnestly, humbly, consistently, and to yield in our hearts to the influence of Christ, Truth. Then we will be open to the reality that our nature is truly benevolent. We welcome benevolence into our heart; we live it, because this giving—this expressing of divine Love—is so completely natural to who we really are.

Standing in line at the grocery store, mingling with people on campus, sitting around the table at a business meeting, working with others on a group project—all the interactions that take place every day are opportunities to give. Patience may be needed. Compassion. Devotion. Moral direction and even courage. Those who yearn to follow Jesus' instruction take advantage of the many opportunities to give of themselves. And they are always benefited by doing so. In Science and Health with Key to the Scriptures, Mary Baker Eddy writes, "The rich in spirit help the poor in one grand brotherhood, all having the same Principle, or Father; and blessed is that man who seeth his brother's need and supplieth it, seeking his own in another's good" (p. 518).

In the midst of particularly difficult circumstances or the overall pressing demands of the times, however, one may be tempted to withhold some expression of good. Maybe it's the feeling that giving additional support to something worthy is asking too much, or that a good deed wouldn't make much of a difference. That's when we need to be especially discerning about what we receive into our consciousness and to guard against the temptation to withhold. Selfishness, jealousy, indifference—whatever would restrain the giving of good—is a product of the so-called carnal mind, a mentality characterized in the Bible as "enmity against God" (Rom. 8:7). Yet, there's nothing really substantial to carnalmindedness—no intelligence, no truth, power, or ability. It is the misconception that there is a mind separate from God and opposed to good.

There is only one Mind, one God, who is pure Love. And in being receptive to the thoughts of divine Mind, humanity comes to know with certainty that man's true nature is the likeness of God, the expression of Love. We discover our natural and boundless capacity for doing good. We know ourselves as givers. 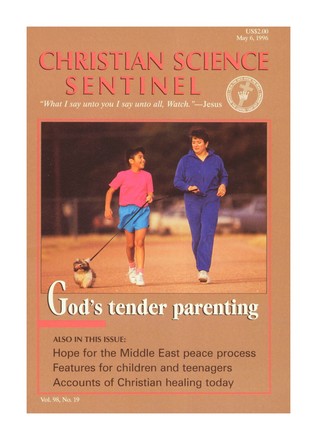 Do you feel you're a failure as a parent?

"Love is a Mother tenderly brooding over all Her children"*

No need to wait. Arise!

In the circle of Love

Peace—through knowing the presence of God

"... there was silence in heaven about the space of half an hour"*

A basis for philanthropy

It is with much humble gratitude and acknowledgment of the...

According to doctors, our daughter suffered from posttraumatic...

A few weeks ago my husband and I spontaneously expressed...

I am grateful for a physical healing I experienced from Christian Science...