Before he was called Paul, which was his Greek name, he was Saul. He really didn't like Christians—the people who followed Jesus. Saul thought Jesus' ideas about God were wrong, and it made him very angry that Jesus had claimed to be the Messiah, or Savior. Saul was a Pharisee, and some Pharisees were so opposed to Jesus' teachings that they punished, or persecuted, the people who followed them. Many Christians were put in prison and, in some cases, killed.

One day, though, when Saul was on his way to Damascus, a city north of Jerusalem, he was shocked to see a very bright light shining right in his eyes. It was so bright that it blinded him, and he fell to the ground. With the light came a voice that said, "Saul, Saul, why are you persecuting me?" Saul asked, "Who are you?" And the voice replied, "I am Jesus, the one you're persecuting. Stand up and go into the city. There, you'll find out what you have to do."

You can imagine how stunned Saul must have been. But he followed the instructions, and three days later, he was healed of the blindness by a Christian named Ananias. This experience changed Saul's life. Not only did he stop hurting Christians, he actually became a follower of Jesus' teachings himself. He was terribly sorry for the things he'd done. With the same zeal that he'd persecuted Christians, he now devoted himself to spreading Christianity. As he carried out his new mission, Saul—now called Paul—endured many hardships. But he kept doing his work.

While Paul was traveling all around Palestine and Asia Minor, stopping in different cities to teach people about what Jesus taught, he had many adventures and was often in danger. People who disagreed with Jesus' teachings were angry with Paul because of what he was preaching, just as Paul had been angry before he became a Christian. But when you're as excited about something as Paul was about Jesus and God, it's hard not to talk about it. Paul became a messenger. He felt he had to bring the good news of Jesus' teachings (the Gospel) to people everywhere.

One time, when Paul was traveling around a place called Philippi, he was put into prison because of his teaching and preaching. His good friend, Silas, was captured, too. Before the guard locked them up, they were beaten. Then their feet were locked in stocks to be sure that they wouldn't get away. Things didn't look good for Paul and Silas. In fact, they had every reason to be scared, upset, even angry at the people who had hurt them. But rather than complain or worry about what had happened (and what might happen), Paul and Silas did something pretty amazing. At midnight they sang hymns together. Sometimes it's hard to sing when you're in trouble. But Paul and Silas sang anyway, so loudly that the other prisoners heard them.

How could they sing at a time like this? Something Paul wrote in one of his letters gives a clue. He said, "I am convinced that there is nothing in death or life, in the realm of spirits or superhuman power, in the world as it is or the world as it shall be, in the forces of the universe, in heights or depths—nothing in all creation that can separate us from the love of God in Christ Jesus our Lord" (New English Bible, Rom. 8:38, 39 ). Nothing that could separate him from God? Paul must have been pretty sure that God was always with him and always caring for him.

Besides Aramaic, the language that Jesus spoke, Paul also spoke Greek. And believe it or not, the fact that he spoke Greek became very important to his ministry. You see, up to that point most people who had become Christians had been Jews. Although Paul was also Jewish and had learned about Jewish law, when he became a Christian, he was most excited to teach people who were Greek. He was one of the first to realize that you didn't have to be Jewish first in order to become a Christian. So thanks to Paul, Christianity spread far beyond where anyone had known about it before.

And it was true. Because all of a sudden, there was an earthquake, which shook the foundation of the prison. The shaking broke the stocks where Paul's and Silas's feet had been locked up, and it opened the doors of the prison. They were free!

This was just one of the times Paul found help by turning to God when he was in trouble. There were many other times, too, like the time he was bitten by a snake, but God protected him. That's why Paul's life, hundreds of years later, still inspires people. He can inspire you, too, to have the courage to take a stand, and to sing, even in tough times, and feel God's love taking care of you. 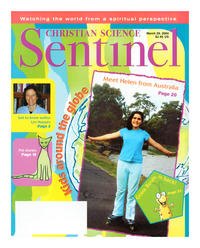