I had to deal with the cold, cloudy days of fall, so unlike my native Brazil. The first day of the month was All Saints' Day, a national holiday. This day is celebrated in many countries as a way to remember family members, but also as a day to mourn.

There were no classes on November 1, and as I rode the trolley I observed several people going to the Zentralfriedhof (central cemetery), not very far from where I lived in Vienna as a student. A few things caught my attention: the way people were dressed, the flowers they carried, the expressions on their faces. For them it didn't seem a solemn or sad event, but more of a social and family occasion. Later I found out that this was so.

But I had never really liked this holiday back home in Brazil. During my teen and adult years I questioned the community's behavior on All Saints' Day and did not go to the cemetery, as did most people. And after that November in Vienna, there were many times when I cried desperately, rebelling at having lost my mother. I felt the injustice of watching her infirmity and death during my childhood, of having grown up without her presence, and enduring times of loneliness without a maternal shoulder on which to shed my tears.

But then I realized that harboring those feelings was not at all constructive. I finally turned to prayer. As a child, I had memorized the Lord's Prayer, which begins, "Our Father which art in heaven." And, when I was 12, I'd learned Mary Baker Eddy's spiritual meaning for this phrase as she wrote it in Science and Health: "Our Father-Mother God, all-harmonious" (p. 16). More than ever I began to free myself from a physical concept of motherhood. I did not stop loving my mother, but I began to understand that I always had my Mother, God, by my side, and that the maternal love, tenderness, and comfort I needed were available to me at every moment, and always would be. This thought brought me not only comfort, but strength and hope, and a foundation for a normal, happy life. I can't say precisely when that feeling of loss dissipated, but I can say that the healing was so complete that many people emerged in my life as "mothers," and a maternal feeling within me grew toward children, relatives, and friends, which to this day fills me with joy.

As I studied the Bible and Science and Health, my unease was quieted and I began to appreciate that people of different cultures interpret the meaning of existence in different ways, which contributes to their way of celebrating life and honoring the departed. In my case, I see that my concept of the world, and of myself, has been formed by the progressive, profound, and metaphysical, cutting-edge vision of Christian Science.

The apostle Paul felt strongly the mission to disseminate Jesus' innovative and profound teachings. Christianity was spreading rapidly at the time but the people of Corinth were distorting some aspects of the true Christian life and living in disarray. Paul showed them in his correspondence how to gain a peaceful life. He included an extensive explanation of eternal life and affirmed that "the last enemy that shall be destroyed is death" (I Cor. 15:26). Why?

Science and Health presents answers in a very logical manner, stating "Life is the law of Soul, even the law of the spirit of Truth, and Soul is never without its representative. Man's individual being can no more die nor disappear in unconsciousness than can Soul, for both are immortal" (p. 427). Here, the author uses Life, Soul, and Truth to refer to God. The "law" Mary Baker Eddy cites is divine law, absolute and incontestable. Since man is the representative of Soul, God, he is immortal—that is, undying, eternal.

Science and Health continues, "Death is but another phase of the dream that existence can be material. Nothing can interfere with the harmony of being nor end the existence of man in Science. ... If man is never to overcome death, why do the Scriptures say, 'The last enemy that shall be destroyed is death'?" It seems clear to me that this discussion is not about corporeal men and women, how many years we will live, or the immortality of a human body. The "enemy" that tries to imprison us is the limited concept of life, the concept that we are subject to decay and to end. Such concepts must be destroyed, overcome by the understanding that Life is eternal because God is Life.

Continuing on the same page, Mrs. Eddy wrote, "The tenor of the Word shows that we shall obtain the victory over death in proportion as we overcome sin." So in the proportion that we eliminate unjust, selfish, vengeful, and evil thoughts, we overcome sin—and, consequently, death. Undying, eternal, immortal—this is the man God created.

I did not stop loving my mother, but I began to understand that I always had my Mother, God, by my side.

In the Kingdom of God there is only immortality. This Kingdom is the consciousness of good, which we can achieve here and now. As Paul says it's the transformation that can occur "in the twinkling of an eye," (I Cor. 15:52). We achieve this by leaving behind a materialistic and limited thought for the attainment of spiritualized and unlimited thinking.

Through spiritualized thinking, we can see and experience eternity, now and forever. We can eliminate funereal impositions and win peace, satisfaction, and tranquility. Dark clouds of personal or collective torments are blown away by the divine breath that brings light, hope, and life to the path we walk.

Such spiritual understanding has enabled me to reject mourning and enjoy the divine strength and joy that always celebrates Life.

Leide Lessa is a Christian Science practitioner. She lives in Dorchester, Massachusetts. 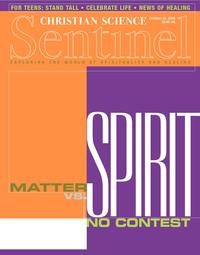