I had just graduated from college and was staying at my dad's house for a while until I settled on a career path. His house was near mountains, full of wonderful trails for running and hiking.

One day I decided to embark on a rather ambitions run—seven miles across rigorous uphill terrain. I was not entirely sure I could finish the run, but in the post-college days of questioning what to do next in life, I felt that this would give me a sense of accomplishment.

As I crossed the road and started up the winding, single-track trail, I did my best to appreciate the beauty around me and to focus on keeping an even pace and regular breathing. It was mid-morning, but the day still felt calm and quiet, as sunshine squinted through heavy, California oak-leaf foliage.

Just as I was starting to feel comfortable, I felt a sudden sharp pain in my mouth. A throbbing sensation followed, and I quickly realized that a bee had flown into my mouth and stung my tongue. It started swelling immediately, to the point that it became very difficult to breathe. One of my first thoughts was of my grandmother on my dad's side, who had suffered severe allergic reactions to bee stings. I had also experienced similar reactions myself when faced with bee stings in the past. That fear started to take hold in my thought.

I was less than a mile into the run, so I easily could have turned around and gone home. But I slowed to a walk and took a few moments to ask God what to do. The thought came clearly to keep going. While that didn't seem physically possible, I didn't want to worry my dad, who was at home that day, and I decided to give prayer a try and work with God along the way.

I was raised in Christian Science, so prayer is very natural to me. As I reached out to God, healing thoughts started to come quickly. The first was that because God, who is divine Mind, created all, bees were included in His good creation. No aspect of God's creation could be in conflict with another. In reality, what He creates isn't physical—it is spiritual. Science and Health says, "God is the Life, or intelligence, which forms and preserves the individuality and identity of animals as well as of men" (p. 550).

I felt a sense of love for this little representation of God, and mentally and audibly declared thoughts about the bee and myself, too. We were both innocent of any wrongdoing. The bee certainly hadn't intended to fly into my mouth. It had just been going about its business—fulfilling its purpose as an expression of industriousness—and it didn't want to hurt me any more than I wanted to hurt it. I also declared my own innocence to overcome any suggestion of self-incrimination. As a child of God, I couldn't be in the wrong place at the wrong time, and I certainly couldn't be blamed for opening my mouth to breath while running. We were each going about our business in God's creation, and there could be no penalty or danger in going about our natural activities.

Although the swelling was dramatic, I was able to breathe through my nose and keep jogging. The first chapter of Genesis came to mind. In my Christian Science-based study of that Bible chapter, it has become clear to me that God's love is the impelling force behind creation. Because God creates each creature perfect, and He is the sole governor of the universe, His creation can only exist in a state of harmony. I continued to be open to thoughts from God through the run, enjoying the concept that a bee and I couldn't be in conflict.

By the end of the 70-minute run, the swelling was entirely gone. I had made it through the entire seven miles. And when I got home, a look in the mirror confirmed complete healing—there was no trace of swelling or injury.

I'm so grateful for the quick healing I experienced that day. Since then, I've been around bees many times and have never felt any fear of them. I also haven't had a bee sting since this healing occurred more than 12 years ago. I'm very grateful for the immediacy of Truth, and for the understanding that God is Love, which a study of Christian Science brings out. 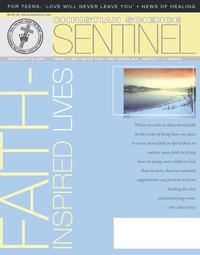