CALL OFF THE BLAME GAME

These Days when a mistake or wrong takes place in government, in the workplace, even in the family, a common scenario seems to play itself out. With ever-increasing frequency, people play "the blame game." As soon as the misdeed becomes evident, there's an impulsive rush to determine who will shoulder responsibility for it, often accompanied by destructive and demoralizing displays of self-justification, zealous fact-finding, condemnation, partisan bickering, smugness, even glee. In the case of high-profile news stories, such an issue can take on a life of its own, dominating the airwaves as opposing sides jockey for the best sound bite and seek opportunities to claim the moral high ground.

This isn't by any means to suggest that wrongdoing should go unaccounted for, or that the system of justice should cease to play its vital role in today's society. But because it is not well-intentioned, the blame game shouldn't be part of the process. It doesn't serve any meaningful function in dispensing justice, and those who devote their energies to playing it are actually diverting attention from constructive solution-finding.

It's important to distinguish between the diligent rectification of misdeeds and the mere casting of blame. When mistakes or scandals surface, are we, as direct participants or concerned onlookers, seeking to be healers or dividers? Making a reality of evil and then pinning its label on another is not productive—and not what Christianity teaches. The rush to blame, litigate, prosecute, judge, and condemn may only indicate a mean-spirited anger operating below the surface of society, a turmoil of self-interest and sensationalism that points toward what really needs attention.

IT'S IMPORTANT TO DISTINGUISH BETWEEN THE DILIGENT RECTIFICATION OF MISDEEDS AND THE MERE CASTING OF BLAME.

Beyond anyone's finding satisfaction in seeing a person accused (even "justifiably"), there's an opportunity for healing and redemption in everyone's seeing more of God's plan for His creation, where "the accuser of our brethren is cast down" (Rev. 12:10). Mary Baker Eddy, who discovered Christian Science, had this to say about this "accuser": "In the Greek devil is named serpent—liar—the god of this world; and St. Paul defines this world's god as dishonesty, craftiness, handling the word of God deceitfully. The original text defines devil as accuser, calumniator; therefore, according to Holy Writ these qualities are objectionable, and ought not to proceed from the individual, the pulpit, or the press" (Message to The Mother Church for 1901, p. 16).

How interesting that in the Bible, the first mention of blameworthy acts, and of a God who knows and condemns them, is in the allegorical record of Eden, where a serpent tempts Adam and Eve to know both good and evil, lose their innocence, and usurp the supreme wisdom of their Creator. After their fall from grace comes the account of condemantion, punishment, suffering, warfare, and killing. But the Science of Christ shows that this entire record of creation is false, a mockery of the true record described in the first chapter of Genesis, where neither God nor His children know or cause evil in any form. We're convinced that everyone has a God-given right, and a moral obligation, to bear witness to the truth of this record, in the spirit of Paul's words, "For as in Adam all die, even so in Christ shall all be made alive" (I Cor. 15:22).

The only way society can put a true end to the blame game is through mental rejection of serpentine, evil lies that tempt us all to think dishonest, crafty, condemnatory thoughts. As well as loving the lovable, this means taking on the more difficult work of declining any temptation to divide God's children into groups labeled "good" and "bad," "guilty" and "innocent," "worthy" and "unworthy," "successes" and "failures."

Jesus was never patient with wrongdoing. But neither did he blame people. He condemned the wrong but not the wrongdoer. His was a ministry of healing and regeneration that embraced everyone, including society's sinners and outcasts. Following his guidance, we find overwhelming evidence that the path to a more stable and prosperous society is marked by a Christlike state of thought that promotes healing and, when needed, transformation of character. This echoes the Psalmist's words "Mark the perfect man, and behold the upright: for the end of that man is peace" (Ps. 37:37). According to Christian Science, it's always possible to behold this "perfect man," because God has made us in His image—spiritual, perfect, blameless.

In the face of corruption, lying, abuse of power, we each have a choice to make. We can rush toward condemnation of persons, reinforcing the evidence of a guilty, sinful world. Or we can refuse the temptation to take satisfaction in the labeling of wrongdoing, and instead pour in the best of our prayerbased conviction that God has not destined His sons and daughters to fall from grace—but to feel the grace that heals and rectifies whatever is wrong. css 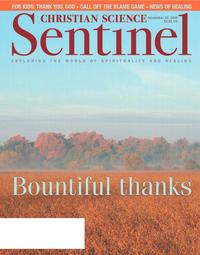