Prayer that defends the innocent

We can all support efforts to defend the innocence of children and protect them from harm. In April, police in Israel arrested 12 individuals for alleged involvement with child pornography. And in 2011, police from 13 European countries cooperated to rescue 230 abused children in 30 countries and end a massive international online pedophile ring.

The outlook for ending pedophilia is bleak if considered through the lens of history, which classifies pedophilia as unstoppable and those convicted of child abuse as having a very high rate of recidivism. But that which debauches character and results in such horrific crime can be effectively challenged through prayer.

Christ Jesus made clear that sin was unacceptable and was to be eliminated. He refused to allow any place for sin to hide. To take just one example, when speaking to the woman taken in adultery who was nearly stoned by an angry mob, he said, “Go, and sin no more” (see John 8:1–11).

Prayer in which God’s goodness and tender, constant care for all His children is acknowledged; prayer in which each of us as God’s sons and daughters is understood to be the spiritual, unfallen, sinless expression of God; and prayer in which sin, disease, and death are known to be impossible—not from God—heals. Such prayer was described by Mary Baker Eddy, the discoverer of the Science of Jesus’ healing, in this way: “The prayer that reforms the sinner and heals the sick is an absolute faith that all things are possible to God,—a spiritual understanding of Him, an unselfed love” (Science and Health with Key to the Scriptures, p. 1).

God does not ask us to love that which is unlovable and undeserving, and we should not condone or excuse wrongdoing of any kind. Instead, keeping before us the model of divine Love’s creating, we see predatory tendencies as counterfeits of Spirit’s goodness and power. By rejecting this sin-filled picture and replacing it in thought with the spiritual reality, sin will be uncovered. Just as darkness cannot hide in light, so sin cannot hide in the light of Christ, Truth.

The Bible notes that “we are the children of God: and if children, then heirs; heirs of God, and joint-heirs with Christ” (Romans 8:16, 17). Because this is true, each individual’s innocence is spiritual, inseparable from God. Thus, each child of God is safe in the protective influence of divine Love. Understanding this fact provides a refuge from worldly dangers for ourselves and others, and it can put a stop to sex crimes.

Such prayer was effective when I suspected that a girl in the preschool class I taught was being molested. Authorities were skeptical, defending the parent’s reputation and citing my inexperience in dealing with such matters. I persisted in prayer, insisting on man’s innocence as well as divine Love’s will and ability to protect His creation unfailingly. By letting the spiritual model of God’s creation reign in my thinking, I was not intimidated by the hideous possibilities or the attempts to silence my request for an investigation. Right reigned, and it was uncovered that the dad had been sexually assaulting his daughter. Appropriate steps were taken to protect the child and hold the parents accountable. 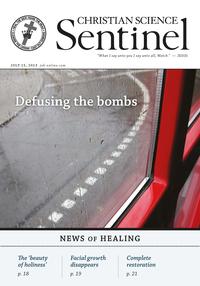