Despite putting forth my best effort, I felt like a failure. I was not used to feeling that way.

This occurred several years ago, when I was teaching at a high-energy school whose purpose was to enable underperforming students to close the achievement gap. Every school day I worked a 12-hour day, and I dedicated time to my work on the weekends as well. I gave everything that I could in my role as a lead teacher, and was embarrassed to admit that working at a K–8 school could be so stressful. I felt consistently overwhelmed and as though I was the weakest link in the chain.

After 19 days of teaching, I was called to a meeting with the principal and the curriculum director and told that I was not meeting the expectations for an educator at this school. I was then given two options. The first was that I would be given three weeks to turn around my classroom culture. If I was successful, I could continue in my position. If I was unsuccessful, my employment would be terminated. The second option was for me to step down into a support role as an assistant teacher.

Upon hearing this message, I felt as though I had been kicked in the stomach. I knew I had had pure motives in seeking out a position at this specific school, and I could not believe I was in this disheartening situation. I felt humiliated that my efforts had led me to what felt like absolute failure.

After a day of feeling physically ill and shedding many tears, I knew that I needed to gain a spiritual perspective. I felt at an utter loss regarding how to pray for myself, so I called a Christian Science practitioner to help me pray about the situation and the choices presented to me. The first idea that we prayed with was that my life is governed by God. There is no other real force or impulse that could take over and lead me astray. God had created me and was caring for me.

Several verses in Psalm 37 spoke to me so clearly, it was as though they had been written for my specific situation: “The steps of a good man are ordered by the Lord: and he delighteth in his way. Though he fall, he shall not be utterly cast down: for the Lord upholdeth him with his hand.… The law of his God is in his heart; none of his steps shall slide.… Mark the perfect man, and behold the upright: for the end of that man is peace.… The salvation of the righteous is of the Lord: he is their strength in the time of trouble” (verses 23, 24, 31, 37, 39).

I knew, deep down, that God had not created anyone to be a failure.

These promises of love and salvation were so comforting to me. God’s assurance in the book of Jeremiah also calmed and reassured me: “ ‘For I know the plans I have for you,’ declares the Lord, ‘plans to prosper you and not to harm you, plans to give you hope and a future’ ” (29:11, New International Version). I needed to see clearly that my employer did not and could not control my destiny. God’s law of ever-present good was in my heart, and I could not be led astray in choosing what I should do. I knew that my motives were pure and unselfish, and that God was loving and supporting me at this time, as always.

As I continued to pray about the situation, I realized that I had to let go of two false notions: that I was a failure and that my specific employment was in any way the source of my identity.

Several passages in Science and Health with Key to the Scriptures by Mary Baker Eddy guided me to a purer, spiritual approach. I was particularly helped by the statement that “God expresses in man the infinite idea forever developing itself, broadening and rising higher and higher from a boundless basis” (p. 258). This required me to make the mental shift to not allow my work situation to define success or to define me. As a perfect, spiritual idea created by God, I have forever expressed excellence and progress, not failure.

There is no aspect of my identity that is not known and treasured by God. And since God can create, know, and recognize only good, absolutely every facet of my being is wholly good. I knew that my expression of intelligence, grace, joy, creativity, dedication, organization, and love come from God.

The spiritual definition of Mind in the Glossary of Science and Health reads, in part, “the divine Principle, or God, of whom man is the full and perfect expression; Deity, which outlines but is not outlined” (p. 591). This definition led me to see that my potential for present and future success was not outlined by a well-intentioned list of criteria and expectations that the school had set forth or that I had laid out for myself. God, Mind, is the only one capable of outlining my identity and life—the only source of my identity and well-being—and He guides me to where I need to be every moment.

My sense of peace and order was restored.

I realized I needed to let go of the fear that my current status was going to impact the rest of my career in a negative way. Not only did I need to stop thinking that others, namely my school administrators, were outlining or curtailing my current and future success, but I also needed to stop doing that to myself. God is the only real authority in my or anyone’s life. I knew, deep down, that God had not created me or anyone to be a failure, and I had a right to prove that. And this experience was teaching me to view trying times as opportunities for spiritual growth and to better prove what I had been learning in Christian Science.

I ended up letting the principal and the curriculum director know that I would take the assistant position, as this seemed to be the most appropriate next step. Immediately, they told me that they had created a new role for me as an intervention teacher and felt it would be beneficial to the students. Pupils were pulled out of the general education classroom for special sessions, and I gave them targeted support in math and literacy. I also supported the lead teacher in the general education classroom.

Agreeing to take a support position led me to learn many lessons regarding humility and meekness. My sense of peace and order was restored, and I was able to dedicate more time to developing myself in roles outside of work, including family as well as church activities.

Looking back on this experience, which occurred several years ago, I am now so grateful for my time spent at that school. It truly prepared me for future job opportunities, and the resolution that I experienced after praying about the situation gave me the confidence to know that I could succeed in adverse circumstances. My teaching career has blossomed in ways that I could not have predicted, and much of this is the result of the growth achieved through that initially discouraging experience.

This experience taught me more concretely that as I humbly and deeply turn to God in prayer, I can expect to find answers and healing in any situation. I was enabled to see, and to prove to some degree, that as a child of God, I can never be a failure. And this is true for each of us. 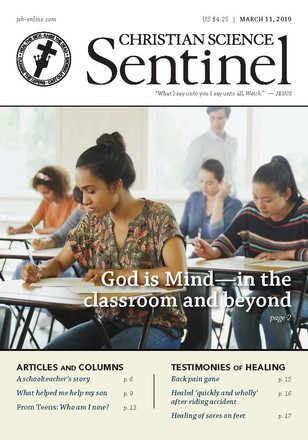 God is Mind—in the classroom and beyond

What helped me help my son

Brotherly love and fairness in education

Healing of sores on feet

A humble and earnest response to the demand for Church