Conquering the waves of fear

Originally appeared online in the teen series Your Healings -  June 22, 2021.

The water level was breaking records. That’s what I’d been hearing even before the summer began. I had plans to be a counselor-in-training for the white-water rafting program at a camp for Christian Scientists in Colorado. White-water rafting is one of my favorite activities and has been one of my biggest passions for the past few years.

At first, I felt excited about the high water, because it would mean new challenges and an immense amount of fun. But then, fear crept in. I began feeling scared of all the things that could go wrong. The river community knows that high water is the best, but that it also comes with many risks and dangers. It didn’t help that it was also my first year on staff, which brought its own set of pressures.

I caught myself looking at the summer through a lens of fear, and as camp got underway, I realized that needed to change. My job was to serve the camp and the campers. Allowing fear to dominate my thoughts would only limit my ability to help others. So, on my day off, I took the time to do what has always helped me in the past: I turned to the Bible and to Science and Health with Key to the Scriptures by Mary Baker Eddy to find some inspiration that could help me address these fears prayerfully. This passage that I found in Science and Health stood out: “If you are yourself lost in the belief and fear of disease or sin, and if, knowing the remedy, you fail to use the energies of Mind in your own behalf, you can exercise little or no power for others’ help” (p. 455).

I related to this passage because I definitely felt lost in a haze of fear. But I also liked that it showed me a way out of the fear—a way to focus on the truth about me, the campers, and the river. The truth was that no matter how things appeared, the water wasn’t actually in control. God, the only power, was in control, and none of us could be harmed by an element of God’s good creation. I began to see that all of us were part of one cohesive whole of God’s goodness. We could expect harmony and joy on the river—not danger or fear. I felt my own worry lessen and started to look forward to our next rafting experience.

The river community knows that high water is the best, but that it also comes with many risks and dangers.

Later, as we got on the river, I was keeping these thoughts in mind. We approached one particular rapid where the evidence of potential danger was particularly dramatic. There was a big drop, plus crashing waves and many obstacles to navigate. But because I had been prayerfully preparing for this, not only was I able to overcome my own fear, but I was also able to help the campers who were afraid.

Together, we held to this idea from the Bible: “The earth was without form, and void; and darkness was upon the face of the deep. And the spirit of God moved upon the face of the waters” (Genesis 1:2). This idea enabled us to look beyond the “darkness” of danger and to know that God was with us, right there in the middle of those waters. There was a noticeable change in the mental atmosphere, and as the fear lifted, everyone on our raft was able to move through the rapids with joyful strength and freedom. That rafting expedition was a huge success.

God was with us, right there in the middle of those waters.

This experience taught me a lot about the power of Christian Science to destroy fear. I found it personally meaningful to see the fear disappear, and our experience that day on the river gave the campers the spiritual confidence they needed to overcome other challenges throughout the summer. 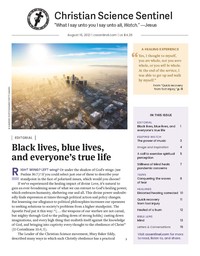