The words weren't new to me, but hearing them read recently at a church service, I really took them in and let them change me: "I exhort therefore, that, first of all, supplications, prayers, intercessions, and giving of thanks, be made for all men; for kings, and for all that are in authority; that we may lead a quiet and peaceable life in all godliness and honesty" (I Tim. 2:1, 2).

This Bible passage went straight to my heart and defined exactly the course of action I needed to take. I realized I needed to change the way I'd been thinking about government leaders and their actions. I needed to reach out and love the people in positions of power, regardless of their political affiliation, or even what I thought about their ability to govern. I needed to support them by knowing that it is God who governs them, because God governs the whole world.

This was a 180-degree change for me. Criticism of political figures had been growing in my thought for some time, and I found myself getting angry, even to the point of tears, when discussing certain national leaders with friends and co-workers. The many political changes in my own country, the United States—not to mention the rest of the world—had been getting me stirred up. I had been so eager to talk about present-day issues that one day I found myself just venting to a friend. Soon I was more than venting—I was quite angry and quickly found myself in tears. I felt seriously afraid and scared for the world. But reaching that level of anger made me realize that something was wrong in the way I was thinking. And I felt I had to correct it right away.

I decided it was time for me to chill, step back, and really dig deep into Christian Science and pray about government, about exactly who or what was governing the world. Soon I realized that being angry, scared, sad, or even slightly critical of a government leader's actions, would only cultivate fear in my own thoughts and actions, and just add to the rest of the world's collective fear of policies and politicians.

The same chapter of First Timothy I quoted from earlier also says, "For there is one God, and one mediator between God and men, the man Christ Jesus" (verse 5). My change of heart brought a clear awakening to me that all men and women actually have a Christly nature, even if it's hard to see. This Christly nature is described in the Preface to Science and Health as "a divine influence ever present in human consciousness" (p. xi). As such, it belongs to everyone as the child of our Father-Mother God. I know that detecting and supporting this true nature will help contribute to a better government. Even if it's just my own thoughts and behavior that are corrected, that's one more acknowledgment that God is truly the one who is governing all of His/Her creation.

Learning to see that the Christ—the message of God speaking to us—is at work in everyone, and that I can trust that Christliness is just as much a part of other people's experiences, actions, and thoughts as it is of mine, is bringing me peace.

The more I learn to understand the nature of Jesus' works, as well as his words, the more I trust that this divinely good nature is an innate and all-saturating part of God's perfectly designed universe. This learning process has affected other areas of my life. I'm learning to change my thoughts and love people around me who formerly had a negative effect on me. When I acknowledge that it is God who governs my thoughts and views of these people, as well as their goodness, I am quickly humbled. I'm learning that my decision to support the Christ nature in myself and others, including those with political power, is a way of seeing that it is really God's power that is active and governing.

Tad Weber is a graphic designer for the Sentinel. 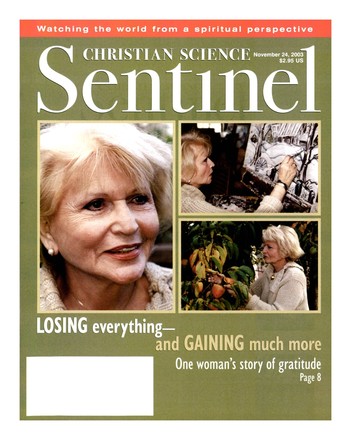 Setting another place at the table

I lost everything—and gained much more

The First Commandment: Start your day with God

A Christian and a Muslim talk about Ramadan

It all started with teaching in an inner-city school

'I ate the Bible'

A government you can love

Prayer put me back in the race

The Word of God frees a young girl

Prayer proves reliable in an emergency

Tell us about your healing

Still a time for giving thanks