A story of peace not violence

He was a nice Kid.

I tutored him at his school when he was in the eighth grade. He wanted to play basketball in high school, and hoped to own his own barber shop some day.

But life was tough on Derek (not his real name). And he was struggling in school. He was reading at the second-grade level. And I, the volunteer tutor, had been asked to work with him one-on-one.

Some of our sessions were good, and some were hard. Sometimes Derek didn't want to talk to me. Other times, he made a real effort. Occasionally he opened up to me, and I learned some shocking information. His best friend had been murdered, by someone who wanted his jacket. His dad had also been murdered. I understood why sometimes he talked about guns and shooting. This was a big part of the world he knew too well.

I also learned with the school staff and through Derek just how much he was supported. His mother worked hard, and was determined to see him succeed. He had men in his community and in his church looking out for him, and he spoke well of them.

As a Christian Scientist, I think a lot about the one Mind, God, governing all. And I had always thought of this as meaning that we all have a common source, a common way to understand and to be. One particular week, a new view on this truth occurred to me when I was praying with the weekly Bible Lesson that Christian Scientists all over the world study. I started to think about the divine Mind as one within itself—as clear, whole, unconfused, undivided, undistracted, unobstructed. I saw that the Science of divine Spirit, which Science and Health explains (see p. 369), rests alone on this absolute oneness, and that our understanding it more clearly results in more clarity, peace, freedom, wisdom, and love on the human scene.

The next time I went to meet Derek in his classroom, we were clearly headed for a very bad day. His teacher had been pushing him, in an effort to keep him from slacking, and he was resisting. She said that if he did not cooperate with me, he would be pulled from the tutoring program. It was clear from her tone that she expected just that. I wanted better for him. I knew he had the God-given right to it.

Derek walked away from us with his head down, and as I looked at him, I knew I couldn't give up on him. I'd been feeling so close to God that morning, and so grateful for His love in my life. And this love spilled over—I just had to share it. Derek was precious in the sight of God. As he walked away, I began to acknowledge that as God's creation, he reflected that one Mind that is undisturbed, uncluttered, unencumbered, and free. His Mind was undivided.

At the tutoring table, Derek kept his head down, full of anger, apparently feeling disliked and belittled. I realized there was no point in trying to get him to do his assignment. His mental state needed lifting up, and I decided to spend our hour together helping him do that.

I began to talk to him. Keeping in mind his God-given worth, and the clarity of consciousness that God had given him, I talked to him about reaching beyond anger, which hurts no one but ourselves. I reminded him of something he had told me, that after his friend's death he had decided to have a better life through helping others. I told him that I knew he could do that, that I wanted him to, and that I knew that other people did, too. He absolutely deserved good experiences, I said. I told him that if he could learn to reach around the hurt and the anger, he would learn how to get a good job and to help other people past their problems.

After I'd talked to Derek this way for about five minutes, his head gradually came up. His face softened. His whole disposition changed. Finally, he said he wanted to do his schoolwork. We got started—and his attitude was the best I'd ever seen.

Understanding our true source of life and truth to be our ever-present God, we find the guidance that fills in the deepest needs.

Later, as I left the school, I heard on the car radio a report of a school shooting in another state, in which a student had come to school with a gun. This followed another school shooting that had occurred just two days before, in which two students had been killed. Although Derek hadn't talked about guns or violence that particular day, it struck me just how significant our experience had been; hurt, helplessness, angry feelings, the same ones that can lead to terrible violence, had been defused.

As we hear about shootings and bombings, whether it be a suicide bomber in the Middle East, or a child with a gun in the United States, we may ask what is in a person's mind that leads him or her to do these things. We hear analyses of life events and body chemistry, and how these can cause someone to become hateful, or hopeless, and ultimately destructive. We may try to understand how the human mind works, and how it is we can learn to see something like this coming so we can head it off.

But I've come to see that the most effective solution is to better understand, not the human mind, but the one divine Mind, which is God, the Creator and Sustainer of all. Intelligence, understanding, and love are eternal qualities of this Mind, and they are inherent to every one of us.

Genesis describes how creation includes light almost from the very beginning. Light represents understanding and clarity, and in the Bible God declares it to be good. Not only that, He consciously divides this light from its opposite, darkness. Understanding is separate from the darkness of despair, chaos, violence, and destruction. There is nothing in darkness to enlighten us. Darkness has no place in the pure, conscious light of God, which is good and shines on all.

As we reason from the premise of a good Mind that is the Creator of man, we are not left in the dark. We are not left without understanding, and we are not left without hope, or compassion. We see solutions where they are needed. Understanding our true source of life and truth to be our ever-present God, we find the guidance that fills in the deepest needs. We find peace within our own consciousness, and the beginnings of peace for the people around us.

As for Derek, he had found a measure of kindness and clarity that he needed. We continued to meet for several more weeks, until the end of the school year. During those weeks, he began to do something new—he walked side-by-side with me through the school. Before this, like most students, he had acted "cool" and had stayed far enough away from me so as not to appear to be associated with me. Now he was content to be seen with me.

One day as we sat down to work, he said, "I did what you said, and it worked." I didn't know what he meant, so I asked him. He told me that when his teacher had done something that started to make him mad, he'd put the anger aside and got about his business. He found that he could do that, get his work done, and feel better about everything for the rest of the day. I was awed! |CSS

Kim Kilduff works as a manager of software engineers. In addition to her school volunteer work, she also enjoys teaching Sunday School at her church in Columbia, Maryland.

Send a comment to the editors
NEXT IN THIS ISSUE
Article
THE FIRST CHURCH OF CHRIST, SCIENTIST, ANNOUNCES SECOND PHASE OF STRATEGIC PLAN 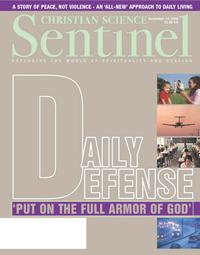