The blessing of Christian Science

I used to like to go out with my friends to drink and pursue worldly pleasures, even when I was married. This went on for many years. With time came the emptiness of feeling bad and feeling alone. I wasn’t taught any religion, and I thought it wasn’t necessary. But as I continued in a path of vices, I realized that I wanted a change in life—that I didn’t feel good about what I was doing. And one day God, in His infinite mercy, showed me the way.

As I walked past a Christian Science Reading Room in Southern California, I felt impelled to look at the notices in the display case, and one was an invitation to the Christian Science church services in Spanish in Tijuana, Mexico, where I live. I decided to write down the address and look for the place where the services were held. That’s how I became acquainted with Christian Science.

I met with the group of Christian Scientists in Tijuana, and I have been an active member of this group ever since. This has brought me many benefits spiritually, as well as peace, harmony, and the desire to find meaning in my life. It was from reading the Christian Science textbook, Science and Health with Key to the Scriptures by the Discoverer of Christian Science, Mary Baker Eddy, that I learned how to identify myself as spiritual, not material—not made of matter, but made in the image and likeness of God, Spirit. And I learned that I was always satisfied as God’s reflection.

As a result, my old way of life ended, including the friendships, selfishness, desires, and amusements that were not pleasing to God. Now my path is the one that leads me to the kingdom of God right here on earth. My faith is placed in God. Nothing compares to the spiritual enlightenment I have received as a result of studying Christian Science.

I have been a member of The Mother Church, The First Church of Christ, Scientist, in Boston, for four years now, and I have also taken Christian Science class instruction, which teaches how we can practice Christian Science and its spiritual method of healing. I thank God for the blessing of having found Christian Science, and for all that is spiritual and holy—and for God’s great mercy, which I needed. 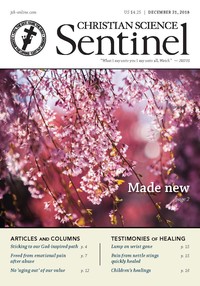