As the Boston Marathon approaches, thoughts turn again to the bombing at last year’s event. Tragedies such as the Newtown, Connecticut, shootings, and other examples of violence have also been in the news.

These events would argue that evil can triumph over good. Yet a close look at the facts reveals strength instead of weakness, courage instead of fear—in short, the presence of the Christ-spirit.

At last year’s marathon, people did everything they could to help one another. The Connecticut state attorney’s report on the school shootings at Newtown on December 14, 2012, makes a similar point. Teachers responded promptly when the school-wide intercom system was turned on “seemingly inadvertently,” and they were able to get many children to safety. Protection through spiritual intuition guided a late-working employee in Boston to avoid an area of Cambridge where the marathon bombers were on the run.

Such examples support our prayers about other situations such as war in Syria and in the Central African Republic, and civil unrest in Ukraine. Their message is that even in the midst of violence, there still is hope. The power of Christ is with us and with all people—always.

In the final analysis, the Christly love Jesus expressed opened the way for each of us to overcome whatever claims to be evil in our world.

As the Psalmist put it: “Whither shall I go from thy spirit? or whither shall I flee from thy presence? If I ascend up into heaven, thou art there: if I make my bed in hell, behold, thou art there. If I take the wings of the morning, and dwell in the uttermost parts of the sea; even there shall thy hand lead me, and thy right hand shall hold me” (Psalm 139:7–10).

In the face of any tragedy, each of us can stand firm in this conviction: God always has held all creation, and all people everywhere, in His hand. And this is still true today.

Even those who appear to be gone from our view are still safe with their divine Father-Mother God. Though it may be difficult at first to accept this fact, it is the spiritual reality. Our prayers can continue to support healing for all who have been affected by such events.

These prayers are undergirded by a powerful promise made by Christ Jesus himself. Speaking before his crucifixion and resurrection, he told his disciples, “In the world ye shall have tribulation: but be of good cheer; I have overcome the world” (John 16:33). Then, with the spiritual courage that was his trademark, he went forward and proved it to be so.

His example can light our way, give us strength, hope, and love for our fellow beings, no matter who they are. In the final analysis, the Christly love Jesus expressed opened the way for each of us to overcome whatever claims to be evil in our world. That knowledge alone can let us “be of good cheer” as we follow our Master’s example. 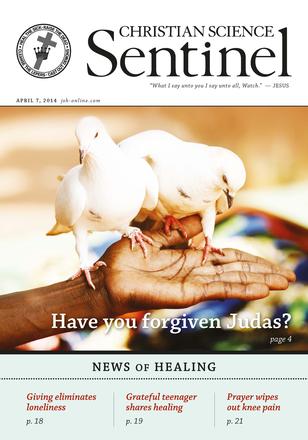 Have you forgiven Judas?

Angels on a train

By Russell Whittaker with contributions from Andy Whittaker | April 2014