Night had fallen when the call came to my squadron's ready room to fly two helicopters to the Marine Corps base at Khe Sanh, Vietnam. It was December 1967, and this had been a long day of flying.

Most of the pilots had already headed for the officers' club at our base to have a few drinks. I was a Christian Scientist and one of only two aircraft commanders who had not consumed any alcohol. Thus, despite the fact that I was the most junior aircraft commander in the squadron, the commanding officer had no option but to send me and another inexperienced pilot on what was expected to be a long and difficult mission.

The weather was bad, and it was with considerable trepidation that I climbed into the cockpit while trying to hold to this truth from Science and Health by Mrs. Eddy (p. 385): "Whatever it is your duty to do, you can do without harm to yourself."

We took off about nine o'clock in the evening, and I kept in loose formation with the other helicopter, which took the lead, by making sure that his blinking red taillight remained in sight. The flight was uneventful until we started climbing to avoid the mountains. As we climbed into the clouds, it became increasingly difficult to keep the red taillight in view. How well I remember the light gradually disappearing into the clouds and darkness. The radios were silent, and blackness seemed to close in on me as fear overwhelmed the confidence I had in my personal skills as an aviator.

I suffered vertigo, and as I confusedly watched the airspeed drop toward zero, I came within a hairbreadth of giving up and resigning myself and my crew to crashing into the mountains. Instead, what I gave up was a struggle to fight my way out of the situation with human skills alone.

As this happened, it was as though the letters L-O-V-E were written across the cockpit window, driving away the fear and darkness. With a wonderful sense of God's, divine Love's, ever-presence and protection, I took prompt action to get the aircraft back into a safe flight condition and proceeded to Khe Sanh.

The base was under attack when we arrived over the radio beacon at the field. By that time I had rejoined the other helicopter, and when the attack ended I made a tricky instrument approach to the field, which was surrounded on three sides by mountains. Not once was fear able to crack the panoply of Love that I felt enveloping us as we made the approach. We descended well below minimums in an effort to spot the landing strip (the base was in total darkness because of the attack), and we eventually climbed back to altitude.

Once we confirmed that there were no injured needing evacuation from Khe Sanh, we headed for the Marine outpost at Quang Tri for fuel. Arriving there about midnight, we almost decided to spend the night, but instead continued on to Phu Bai. Once again Love's guiding hand was present; the area where we would have been sleeping in our aircraft at Quang Tri came under the heaviest attack of the war later that night.

This episode brought home to me the futility of trying to struggle humanly to meet the challenges of the world. I knew I was a good pilot, but I learned that I would not have survived if I had relied on that ability alone. In my extremity I finally gave up the human struggle and relied on God. We learn that "man's extremity is God's opportunity." My extremity was God's opportunity, but it was also my opportunity to prove that I could wholeheartedly turn to God in time of trial.

With much gratitude I acknowledge that not only has Christian Science shown me that we are never without aid; it has provided the key to understanding why, as God's idea, I include all the spiritual qualities supremely manifested in Christ Jesus' life. 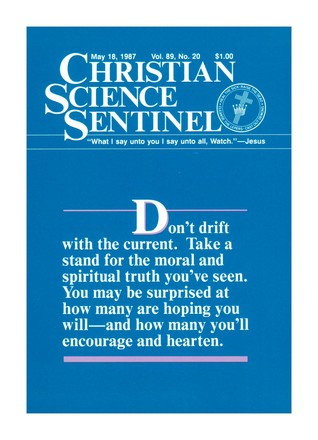 The link between gratitude and healing

Does it help to pray about examinations?

There's no substitute for real joy

He will shake heaven and earth, that only the unshakable...

Is there a way out of anxieties?

Are you floating or swimming?

By Deborah Mason with contributions from Ann Belford Ulanov | May 1987

Toward a new humanity

Not by words alone

With all the attention being focused in the media on prevention...

There are many blessings that I must give thanks for

One Wednesday night I wanted to give a testimony at my...

By Lori Leal with contributions from Jeanette Livingston | May 1987

Many years ago a growth appeared under my arm and despite...

Night had fallen when the call came to my squadron's ready...