IN A RECENT New York Times Magazine article, "My pain, my brain," a writer who had suffered chronic pain for years described taking part in a study to find out if getting a better understanding of how her brain worked might help her manage pain or even end it (May 13).

The woman could see that her thought had a great effect on her experience. But she noted that reducing pain wasn't merely a matter of thinking "nice" thoughts, and that it was very difficult to conjure up the right sort of thoughts that would bring healing.

I wasn't surprised by her experience. Years ago I struggled with chronic pain. Doctors told me that my condition was difficult to treat because they couldn't pinpoint the source of the pain. I could try surgery, but it might not bring relief and could cause complications.

I WAS HEALED THROUGH PRAYER—WHAT I'VE NOW COME TO KNOW AS THE LARGENESS AND ALL-INCLUSIVE FEELING OF GOD'S TENDER CARE, A GLIMPSE OF LIFE AS IT REALLY IS.

After exhausting medical options, I tried yoga, biofeedback, meditation, diet, acupuncture, and herbal remedies. At times it seemed I was gaining some control over the pain, but then it would return with incapacitating strength.

As time went on, I began to despair over my condition. And then, unexpectedly, I found relief through prayer. Unexpectedly, because I hadn't set out to pray. Though raised in Christian Science, I hadn't thought about prayer for years. I'd had numerous healings as a child, but how the healing was done was a mystery to me. I knew it had something to do with my thought, because that was where I experienced the relief first, but I knew that I had not created that relief, and I didn't know how to find it consistently.

One night, I felt worn out by my physical problems. I'd been in pain all day, and I had no hope that the next day would be any different. It seemed I had run out of options.

Not wanting to dwell on this depressing thought, I tried to think of something that wasn't subject to the ups and downs of human life. It took quite a while, but when everything else had fallen away, I found that I was left with the knowledge of love. Not so much specific incidents or memories, but the sense of what was behind all those individual experiences—an overarching, spiritual sense of love.

Feeling calm and refreshed, I fell into a peaceful sleep. The next morning, the pain was gone, and it was as if I had become a new person—untouched by pain.

Thinking over what had happened, I recalled that sense of love. It had been exactly what I'd felt as a child when I was healed through prayer—what I've now come to know as the largeness and all-inclusive feeling of God's tender care, a glimpse of life as it really is. In the years that had passed, a mortal and material sense of reality had taken over, but when that was cleared aside, divine Love, as I had first known it, was intact and was embracing me.

Later that day I got out my old copy of Science and Health to find an explanation. In the preface, I read: "Many imagine that the phenomena of physical healing in Christian Science present only a phase of the action of the human mind, which action in some unexplained way results in the cure of disease.

... The physical healing of Christian Science results now, as in Jesus' time, from the operation of divine Principle, before which sin and disease lose their reality in human consciousness and disappear as naturally and as necessarily as darkness gives place to light and sin to reformation" (p. xi).

Jesus said, "All things, whatsoever ye shall ask in prayer, believing, ye shall receive" (Matt. 21:22). I saw that the ability to believe doesn't depend on human will or psychology. It isn't a personal ability that's needed, but a recognition that God—infinite Love—is real.

Receptivity to spiritual healing doesn't depend on how our brains work. Its source is the realness of God, Love. Universal Love is available to all, and we respond to it naturally, with healing results. 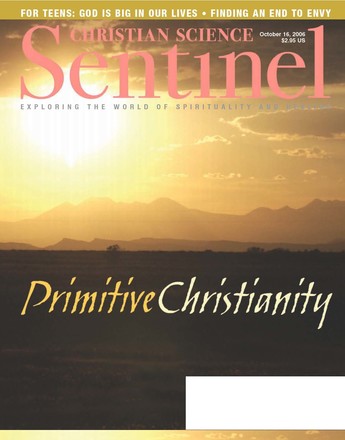 And what about Jesus' healings?

Healing in the spirit of Christ

GOD IS BIG in our lives

FINDING AN END TO ENVY

THE END OF PAIN

MY OWN GOLD MEDAL

DISEASE AND ANGER YIELD TO PRAYER

NOT A DROPLET OF WORRY