A few years ago, a small growth appeared on my right eyelid. I prayed, but it grew bigger. I became acutely aware of the growth and felt everyone else must be noticing it too, though no one mentioned it.

Then someone did say something, and I wondered if I should submit to having the growth surgically removed. I did not really want that, though, because I knew that God is the best “surgeon.” I had experienced the removal of unwanted growths before through relying on the teachings of Christian Science.

When I was a child, warts appeared on my hands. My grandmother told me I was God’s perfect child and warts were no part of that perfection. I was encouraged to see myself as perfect. I remember each night turning to God by myself after we had said our prayers and sung a hymn. I would put my hands under my pillow, think about what my grandmother had said, and bring them out to look at them, expecting to see perfect hands, and be disappointed.

Then one day the warts just were not there anymore. Later I realized that what my grandmother was teaching me to do is contained in this sentence from Science and Health with Key to the Scriptures: “Jesus beheld in Science the perfect man, who appeared to him where sinning mortal man appears to mortals. In this perfect man the Saviour saw God’s own likeness, and this correct view of man healed the sick” (Mary Baker Eddy, pp. 476–477).

A few years later, my best friend got verrucae (warts) on the soles of her feet, which she had removed by a doctor. They kept coming back, and she kept having them removed. When I went away to college, someone in my dorm had warts on her feet. I remember thinking I best be careful, as I did not want to get them. But I also got warts on my feet, and it was no fun. As walking became difficult and painful, I prayed earnestly.

The basis of my prayer was a passage on page 99 of Science and Health: “The calm, strong currents of true spirituality, the manifestations of which are health, purity, and self-immolation, must deepen human experience, until the beliefs of material existence are seen to be a bald imposition, and sin, disease, and death give everlasting place to the scientific demonstration of divine Spirit and to God’s spiritual, perfect man.”

The words “bald imposition” in that sentence stood out to me. I took this as God telling me very firmly that what I was experiencing was nothing but a “bald imposition,” not part of His creation—me—at all. One evening, as I was having a bath, a bit of flesh about three centimeters in diameter came off the bottom of my foot. There was no mark on my foot. That was the end of it.

So I knew from firsthand experience that prayer heals and that I could rely on God to eliminate the growth on my eyelid. I understood that God knew nothing about it, in fact, because He sees me as I really am, a perfect spiritual idea. I did not want to be impressed by the material appearance, so I decided to avoid looking at my eye in mirrors.

I knew that “a spiritual idea has not a single element of error, and this truth removes properly whatever is offensive” (Science and Health, p. 463). I clung to the truth about me, as God sees me, and held to this for others, too. I also started to declare, whenever I thought about it, that the only growth I could truly recognize is spiritual growth.

About 18 months ago, on a hot day, I ran my fingers over my eyes and felt no hard knob. A look in a mirror confirmed that the growth was gone. I enjoyed the knowledge for a few days, then pointed it out to my husband, who looked at me more closely and agreed that it was indeed gone. We were both very happy and thanked God. 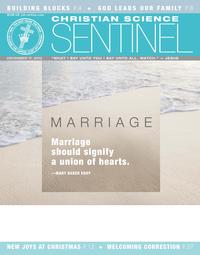