This past summer I was a counselor-in-training (CIT) at a summer camp for Christian Scientists. The summer was filled with new experiences, revelations, and lots of new chances to demonstrate Christian Science. There were many healings that I experienced, but the most prominent was a healing of my leg.

As I participated in a staff “gym-khana” (in this case, an equestrian race), I was thrown off my horse while running in an event called the “keyhole.” In this gymkhana event you ride into a keyhole-looking area in which you have to go through two poles, stop, turn around, and then run out between the two poles, while being timed.

It was while stopping that I lost balance in my saddle and got thrown off my horse. After landing, I immediately started to feel discomfort in my leg. Since I was told I could run the event again, my only thought was to get back in the saddle.

Nothing can interfere with the perfection of God’s kingdom.

My turn soon came again, and I saddled up. I ran the keyhole, but when finished I had to dismount and lie down because of increased pain in my leg. Soon there were people around me, surrounding me in a sense of love, sharing small tidbits of Christian Science such as “God is Love,” and the first part of “the scientific statement of being” from Science and Health with Key to the Scriptures by Mary Baker Eddy (p. 468).

One important idea that I was praying with during this healing was that Principle is a synonym of God, and that nothing can interfere with the perfection of God’s kingdom. I knew that God’s man can’t fall out of perfection, and that the material picture in front of me, the pain and injury, was a lie about me.

The practitioner was sharing thoughts on integrity. The thought of integrity indicates the wholeness of my true self, how I am not strung together by nerves, tendons, and muscles. Rather, I am the seamless image of God, expressing the integrity, or completeness, of God.

I wanted to rest for a while, and so I closed my eyes. I decided to silence negative thoughts and just lay silently as the practitioner sat with me in the room, praying. During that time I was trying to still my thoughts and listen to God.

After about ten minutes had passed, I reopened my eyes to discover a good amount of progress had taken place. I awoke with a very clear sense of how I am God’s perfect image and likeness.

It was July 4, and I had plans to go to the fireworks that the local town puts on every year. This required a little bit of walking, and so I claimed that nothing, no sort of material lie or appearance of any physical discord, could impede good. I realized the pain had lessened to where I felt comfortable walking. I got up and was able to go see the fireworks, which I was sure was right to do.

Over the next two days, the remaining discomfort dissipated, and I was soon able to move freely. By the time the campers arrived, I was fine. My job for the rest of the summer was very physically demanding, and I was able to do this job without any limitations. The leg pain didn’t return.

This healing gave me a small glimpse of “the whole picture”—the perfect man God made me to be—and it has made my interest in and my commitment to Christian Science grow immensely.

Garrett is in his senior year of high school and enjoys swimming, horseback riding, and hanging out with friends. 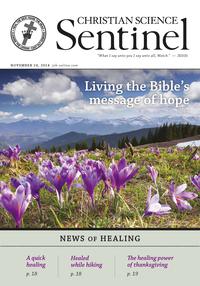