“For the word of God is quick, and powerful, and sharper than any two-edged sword, piercing even to the dividing asunder of soul and spirit, and of the joints and marrow, and is a discerner of the thoughts and intents of the heart” (Hebrews 4:12). One morning a few years ago, I had a healing that made clear to me the potency of this passage.

I had dropped by my dad’s house to take him to an appointment and help him with a few chores. There was a lot to do, and I was feeling rushed as I tried to get a few last-minute things done before we left. I ran outside to get a tool, determined to be as quick as possible so we wouldn’t be late for his appointment. Not looking where I was going, I stepped right on top of a wasps’ nest.

It was a warm summer day, and the wasps were very active. Immediately, they swarmed my ankles and legs, stinging me many times. Fearful that the swarm of wasps would get bigger and sting me even more, I ran away from the nest as fast as I could until I felt it was safe to stop. At first, the pain in my ankles and lower legs was so intense that it was difficult to think clearly. But I knew I needed to turn completely to God and get my thought clear of fear, anger at the wasps, and even a little guilt that I had been so careless as to step on their nest and disturb them.

I worked on calming my thought by reaching out to God in prayer, but soon realized that my ankles and legs were losing feeling, and it was becoming difficult to stand. I was also experiencing other symptoms and was afraid I was going to pass out. Thankfully, I had my phone in my pocket, and I called my husband to ask him to pray for me. When he answered the phone, all I could say was, “Help.” His calming voice was so reassuring, however, that I was quickly able to talk to him coherently about what had happened. He quoted the following passage about God’s creation, which is always harmonious and good, from Science and Health with Key to the Scriptures by Mary Baker Eddy: “All of God’s creatures, moving in the harmony of Science, are harmless, useful, indestructible” (p. 514).

This idea can be difficult to believe minutes after being stung by wasps, or in the middle of any inharmonious situation, but the truth in that statement really was, as affirmed in Hebrews, “quick, and powerful, and sharper than any two-edged sword.” I could feel the truth of it, and I knew my husband was continuing to give prayerful treatment for me. Within a couple of minutes, all of the feeling was back in my ankles and legs, and I no longer felt faint, though one ankle still felt warm and seemed to be swelling.

I had left one of my slip-on shoes behind when I ran from the nest, and I needed it. I kept thinking about that passage from Science and Health and about God loving all of His creatures, and the effect of these truths on my thought was so powerful as to completely remove the fear, anger, and guilt. I considered not getting the shoe until evening when the wasps wouldn’t be active, but I had a strong sense of peace about the situation and slowly walked up to the nest. I picked up my shoe and walked away. A few wasps were circling their nest but were totally uninterested in me.

When I got back to the house, my dad was ready to leave and didn’t even comment that I had been delayed. As we were driving down the driveway, I realized there was no longer any swelling in my ankle. In fact, there was no feeling of having been stung at all! And my legs and ankles were back to normal appearance within a couple of hours. We also got to our destination at an appropriate time.

I am so grateful for this healing. It was such a beautiful witnessing of God’s Word in action.

Send a comment to the editors
NEXT IN THIS ISSUE
Image and Inspiration
'The Lord is my shepherd ...' 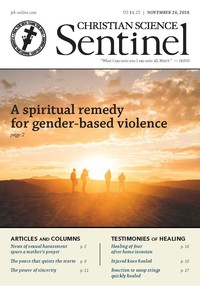