Christ Jesus once said to his disciples, “Freely ye have received, freely give” (Matthew 10:8). Spiritually understood, this teaching shows the precise relationship between the good we receive from God and our ability to give. Since God is infinite, unlimited divine Love, the good He bestows upon us—His spiritual image and likeness—is also unlimited. And therefore, our ability to give is unlimited as well.

A limited sense of our ability to give often comes from a mistaken belief that we are giving of our own personal selves, or from a limited amount of good that can dry up. But since our source of being, God, is infinite and can never run dry, neither can we. When we realize that the good we give to others is simply the reflected goodness we receive from the infinite Love that is God, there can be no end to our giving, and no limitation resulting from it.

A ray of sunlight does not shine on its own; it proceeds from the sun. In the same way, our light, our love, is the outcome of God. Jesus said, “Let your light so shine before men, that they may see your good works, and glorify your Father which is in heaven” (Matthew 5:16). And because it is God’s light we are expressing, it is also His authority we are expressing. We have no authority of our own selves, separate from God, to personally give to others; our authority comes from God. As Jesus also said, “I can of mine own self do nothing: as I hear, I judge: and my judgment is just; because I seek not mine own will, but the will of the Father which hath sent me” (John 5:30). Therefore, our ability and authority to give are equally from God, our infinite source.

As an Army chaplain representing Christian Science and The Mother Church in the military, I constantly looked for ways to share the truths of Christian Science with others. Ultimately, I found the most effective way was simply through healing sickness and sin, thus reflecting and demonstrating the healing light of divine Truth. There also came a few opportunities to share passages from the Christian Science textbook, Science and Health with Key to the Scriptures by Mary Baker Eddy, especially when working with my fellow chaplains from other Christian denominations.

Our ability and authority to give are equally from God.

One passage from Science and Health that persistently comes to thought when working with other Christians is, “Christianity as Jesus taught it was not a creed, nor a system of ceremonies, nor a special gift from a ritualistic Jehovah; but it was the demonstration of divine Love casting out error and healing the sick, not merely in the name of Christ, or Truth, but in demonstration of Truth, as must be the case in the cycles of divine light” (p. 135).

I love this passage, but I’m embarrassed to admit I was initially reticent in sharing it with other Christian chaplains. I thought, “Why did Mrs. Eddy have to include that last phrase about the cycles of divine light? The statement was perfect up until that point!” I assumed my fellow chaplains would find the phrase “cycles of divine light” strange, and possibly confusing.

After praying about this, I realized my thinking about this passage needed to change. I was reminded of the Bible account of Jesus healing a centurion’s servant, found in the Gospels of Matthew and Luke, which illustrates the concept of authority. In the narrative, the centurion, a Roman military officer, recognized Christ Jesus’ complete authority over sickness and sin because of the centurion’s own authority over his soldiers. This recognition of Christ’s authority elicited from Jesus one of perhaps his highest compliments: “I have not found so great faith, no, not in Israel” (see Matthew 8:5–13).

I had to ask myself, “What am I recognizing as authority: my own opinions and assumptions, or the truth given in the Bible and Science and Health?” A passage from Mrs. Eddy’s book The First Church of Christ, Scientist, and Miscellany then came to thought: “It was not myself, but the divine power of Truth and Love, infinitely above me, which dictated ‘Science and Health with Key to the Scriptures’ ” (p. 114). The authority of the truth found in the Bible and Science and Health comes not from the opinions and perspectives of human authors, or recorders, but from God. This positioned my thought for the first time to be open to the meaning of that phrase, “cycles of divine light.” Pride and human frustration were chastened. With a new sense of humility I explored the concept of cycles of light and discovered some amazing insights.

According to physics, light exists in electromagnetic waves, which oscillate at various frequencies, only a small portion of which are visible to the human eye. Cycle is a term sometimes used in mathematics and physics, and in the case of light, a cycle is a complete rotation of the oscillating wavelength of a particular frequency of light. One might understand a cycle of light as light’s full expression of itself, which naturally eliminates any darkness, since darkness is not a real thing, but is merely the absence of light.

I am grateful for the renewed understanding of genuine authority as belonging to God.

In the case of divine light, a cycle, or full expression, would naturally eliminate any evil, since Christian Science reveals evil as not a real presence or power but merely the supposed absence of good. Mrs. Eddy explains: “We are sometimes led to believe that darkness is as real as light; but Science affirms darkness to be only a mortal sense of the absence of light, at the coming of which darkness loses the appearance of reality. So sin and sorrow, disease and death, are the suppositional absence of Life, God, and flee as phantoms of error before truth and love” (Science and Health, p. 215). When the divine light of the Christ, or Truth, shines, it must cast out error and heal the sick.

The phrase about “cycles of divine light,” which seemed at first strange and superfluous, now stood out as an incredibly powerful metaphor, perfectly illustrating the activity and power of the Christianity Jesus taught. The deeper meaning of that phrase had been sitting there all along, waiting to be studied and understood. I had now “freely received” a clearer insight into the deep truth of that phrase, and because I had received, or understood, that insight, it was now natural to “freely give” it to others.

The reluctance to share that full passage from Science and Health disappeared and was replaced with a natural, eager joy to share its marvelous truth. An opportunity then came to share it with a fellow chaplain. We had wonderful conversations about what I had gleaned from my study of divine light, and what it means for the destruction of evil and the salvation of man.

I am grateful for the renewed understanding of genuine authority as belonging to God and as reflected in God’s revelation to humanity in the Bible and Science and Health. This understanding of genuine authority humbles us and lifts our thoughts higher to love God and His children even more, letting our light shine, which naturally dispels any seeming darkness around us.

The Word of God, divine Science, eliminates the seeming darkness of evil by revealing and demonstrating the ever-present light and goodness of God. “Divine Science, the Word of God, saith to the darkness upon the face of error, ‘God is All-in-all,’ and the light of ever-present Love illumines the universe” (Science and Health, p. 503). That eternal authority certainly allows and enables us to give freely! 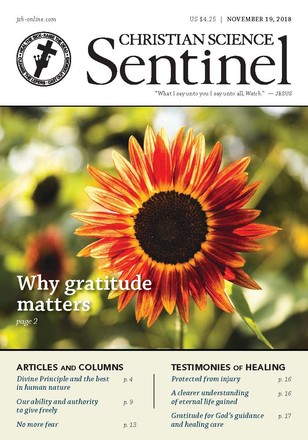 Divine Principle and the best in human nature

Testimony meetings give glory to God

Our ability and authority to give freely

The magnifying and multiplying effect of our gratitude