For about a year, I really struggled with hatred toward a girl in my grade. I could barely stand to be in the same room with her, let alone talk with her.

I was upset with this girl because of something she had said. And soon, my anger about that made me dislike everything about her, and I became very judgmental toward her. After a while, though, I realized that the hatred was actually taking a toll on me, and that’s when I decided that I needed to talk to her.

When I mustered the courage to tell her why I was so upset, the conversation was not a very productive one. A few days later, I went to talk to her again and got so frustrated that I practically yelled at her. All I could think about was that she was an altogether terrible person.

We kept arguing back and forth, and it seemed like things were still going nowhere. But then she asked me, if I could so quickly assume that she had bad intentions, why couldn’t I assume that she had good ones? This shut me up. Why had I so quickly assumed she was a bad person? Why couldn’t I see anything good in her? I told her she’d made a good point, and I promised I would try and focus on the good.

The girl who stood in front of me was not the girl I once knew (or thought I knew). For the first time, I felt like I was seeing her as purely a child of God.

Later that day, I asked a friend how I could see the good in someone who was frustrating me. He told me I could love her. This was such a simple idea, but I knew it was a powerful one, because it’s what Christ Jesus did and how he healed. And it’s what he taught us to do, too. In the Christian Science Sunday School I’d also learned that loving someone as Jesus taught is so much more than trying to give someone the benefit of the doubt. The love I needed to show toward this girl began with seeing her the way God created her and sees her. Since God is completely good, then her true selfhood as God’s child must reflect God’s perfection, always worthy of love. She might not appear this way on the surface, but loving her meant letting God show me the truth about her.

Later that night, after I’d prayed about being able to love this girl, I had the idea to go up to her and introduce myself. I walked up to her, stuck out my hand, and said, “Hi. My name is Gracie Paul, and I would like to meet you.” The person I wanted to meet was not the girl I had been so frustrated with, but rather, a girl I could know only as God’s child. She shook my hand, introduced herself, and told me she would also like to meet me.

In that instant, every bit of hatred and anger I’d been feeling toward this girl completely vanished. The girl who stood in front of me was not the girl I once knew (or thought I knew). For the first time, I felt like I was seeing her as purely a child of God. Nothing about what she’d said or done in the past mattered anymore, because my view of her had been transformed.

The next night at church, one of the hymns was No. 270 from the Christian Science Hymnal. Part of the second verse reads:

Our God is Mind, the perfect Mind,
Intelligence divine;
Shall mortal man ask Him to change
His infinite design?

It was at this point that I realized where I’d been wrong before. The whole time we’d been at odds, I’d been trying to make this girl change, when the spiritual fact was that God had already made her infinitely perfect. The only thing that had to change was my perception of her.

The next verse begins:

O loving Father, well we know
That words alone are vain,
That those who seek Thy will to do,
The true communion gain.
(Frederic W. Root) 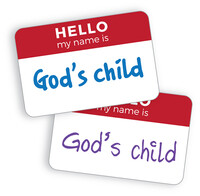 When I had sought God’s “will to do,” which meant seeing this girl as God sees her, I gained a clearer understanding of what her identity truly is. The healing took place when I was willing to see her spiritually—as nothing less than perfect. And I can honestly say that ever since, I’ve felt only love toward her, and there are no disagreements between us.

Through this experience, I learned that if you are ever at odds with someone, it might just be an opportunity to change your perception of them. For me, this started with really learning how to love. I am so grateful to Christian Science for teaching me how to understand and actually see the true nature of God’s children. 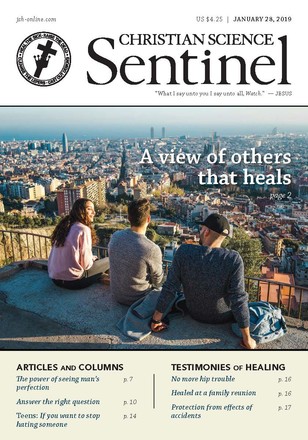 A view of others that heals

The power of seeing man’s perfection

The Mind we can rely on

The gift of Christian Science

If you want to stop hating someone

Healed at a family reunion

Protection from effects of accidents

Redeeming ourselves from strongman rule