RIDING MY BIKE to the office the other day, I used the time to think about the challenges of polarization in society. A mental image hit me head-on when I came to a busy intersection: four cars approaching at the exact same moment, from four different directions. In that situation, I wondered, Who has the right of way? In the social context, that image translates: Who has the right way of thinking?

Even though drivers generally know the rules of the road, they are increasingly too impatient to follow those rules. As a matter of fact, sometimes negotiating German intersections seems as risky as casino gambling. The question of who goes first should be a matter of eye-to-eye communication, of patience and thinking beyond one's own interests. But all too often, one driver will take off without any communication, perhaps because he or she thinks the communication thing is taking a bit too long.

Public dialogue on political and social issues is at one of those crowded intersections. From time to time, we all may be challenged to think beyond our own place in the flow of traffic—to consider other positions, to value others' ideas. When that openness is missing, even the courtesy of friendly eye contact can get lost in the competitive shuffle.

Shift from city street traffic to the marketplace of ideas, and "Me first" can become valued as the only intelligent and relevant position. Conversations become less about finding common ground and integrating different positions, and more about positioning oneself favorably, or reassuring ourselves that we're "right" regardless of what others think.

Polarization is also rooted in fear of "the other" and of the unknown. It occurs when people shut themselves off from information originating outside their knowledge framework. It involves a kind of closed-loop thinking that accepts only familiar information, which results in even more strongly held or extreme positions.

What about polarization at the national or international level? I've observed that some Germans from the "old Länder" (the Westerners) may still be seeing stereotypes of the "new Länder" (those from the former East Germany), and vice versa. Also, one's perception of other countries can become hardened by the way events and policy statements are perceived, rather than softened through reason and tolerance for other viewpoints. Attitudes toward the war in Iraq, for example, reflect to a degree the effects of polarization: Those who "knew all along that the war was right," as well as those who "always knew it was wrong," sometimes selectively seek only the "facts" that prove their position.

Public dialogue on political and social issues is at one of those crowded intersections. From time to time, we all may be challenged to think beyond our own place in the flow of traffic.

On other fronts, there's a tendency to see other issues in starkly right/wrong terms: immigration, globalization, environmental and resource concerns—the list gone on. The not-beyond-my-front bumper mode of thinking (to return to my traffic metaphor) is even reflected in the ways some people use the Internet. Many only visit websites that conform to their views, and millions practice a kind of information filtering when they use personal news pages they've set up on popular search engines.

Democracy, though, thrives best when people utilize a variety of news sources. Cass Sunstein, professor of jurisprudence at University of Chicago, calls it "extremely important" that people be exposed "to views other than those with which they currently agree, in order to protect against the harmful effects of group polarization on individual thinking and on social cohesion" (www.littlemag.com/mar-apr01/cass7.html).

But even as helpful as it might be to read newspaper columns or watch television shows that one might normally disagree with, the solution to polarization must come from a deeper, spiritual place. A more peaceful world ultimately will come as more of us discern the reality of creation as being essentially in and of God. We have common ground in the spiritual manhood and womanhood that He has given us.

I find a helpful spiritual lesson about healing polarized thinking in a Bible story involving the prophet Elisha. At one point, he and his servant find themselves surrounded by a hostile Syrian army (see II Kings, chapter 6). The servant is overcome with panic and hopelessness. The situation looks pretty clear cut: no way out. But Elisha sees things spiritually—the way God has created them. He prays that his servant's eyes (his understanding) might be opened—to the invisible reality that God is in control of events.

One could say that Elisha wants his servant to see what is divinely true—to think outside the box, if you will. Elisha's viewpoint is based solely on information that he gets from the divine Mind, from God. Even though they are surrounded by a formidable force, he says to his servant, "they that be with us are more than they that be with them."

The servant's fear is the result of seeing the inevitable conflict of divisible humanity—in this case, that there are just two of "us" and lots of "them." Elisha apparently sees in that same place something profound about God's wholeness, about the supremacy of the divine Mind. And his understanding of those realities saves them. Suddenly his servant realizes they are surrounded by the protection of "horses and chariots of fire."

But there is more. "Elisha prayed unto the Lord, and said, Smite this people, I pray thee, with blindness. And he [God] smote them with blindness...." Was the hostile army actually perception-blind as well as literally sightless? As long as their momentarily polarized thinking was blind to God being both One and universal, and to the fact that harmony is the natural state of God's children, then they literally could not see where they were going. They had things to learn about the divine law of loving one's neighbor as one wants to be loved—an ancient (and very modern) rule of life.

There is yet more to the story. Elisha's next act heals intolerant, polarized thinking on both sides. The sightless raiders follow Elisha into Samaria where they're surrounded by Israel's forces. The King of Israel wants to slaughter them, but Elisha forbids it and insists that they be given respect and hospitality. "So the bands of Syria came no more into the land of Israel," the account concludes.

I take from this story the idea that God's power can correct false views on every side, as we dare to act in ways that go beyond conventional expectations and inclinations. Elisha's hospitality to the Syrian armies could translate today as receptivity to other points of view, and not being fearful that "foreign" ideas will overwhelm and pollute what one cherishes as truth. But Elisha was also totally inhospitable to the real enemy—to hostility and aggression, whether they appeared in foe's or friend's thinking.

My conviction is that God's impartial love is the cornerstone for a world in which even four parties at a crossroads need not collide or be stalled in confusion.

To align oneself with God's truthfulness—and that's what prayer does—both sustains us individually and connects us with others, irrespective of the views they hold. This connective spiritual force, which I think of as the Christ, leads to peace, right where limited perceptions may see only the potential for continuing conflict.

Mary Baker Eddy pioneered the practice of spiritual healing for both personal and social ills. For her, wellness in relationships required the same kind of "mental work," or prayer, as would heal an illness. "People with mental work before them," she wrote, "have no time for gossip about false law or testimony. To reconstruct timid justice and place the fact above the falsehood, is the work of time" (Science and Health with Key to the Scriptures, p.238).

So what about global polarization issues, such as concerns about conflict between Islam and Christianity, East and West, or men and women? Addressing these issues will take time. But if in one clear case (Elisha's), an inspired understanding of God as universally good and powerful changed human relations for the better, then our thoughts, prayers, and actions can make a similar difference today.

In responding to polarized thinking in individual lives or on global levels, it's one thing not to wall ourselves off from differing views. The next step is to practice the art of listening—first and foremost, the art of listening to God, and accepting what we hear from Him about our own spiritual identity, and that of our neighbors. It also means drawing on spiritual intuition for trustworthy information from the highest level.

My conviction is that God's impartial love is the cornerstone for a world in which even four parties at a crossroads need not collide or be stalled in confusion. That, through open communication, they—we all—can attain new dimensions of cooperation and integration. We may even gain a taste of heaven.

Klaus Herr and his family live in Berlin. 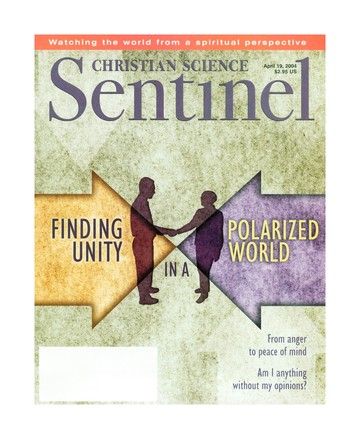 My will be done?

Finding unity in a world of competing interests

From anger to peace of mind

Am I anything without my opinions?

A hymn at the mosque

A change in my life brought me back to church

The language we teach our children

The Gospel of John now on DVD

Through a spiritual lens— CATHEDRAL OF THE SEA

Prayer proves to be effective and reliable