To be a healer instead of a worrier: How I’m praying for world leaders

It can be tempting to feel overwhelmed when we hear about world leaders who are in conflict with each other and sometimes at odds with the citizens they are governing. How can we think about “power players” who are making decisions that could have lasting consequences? I’ve been yearning to do much more than express heartfelt concern. I’ve been yearning to bring healing to our world.

I’m heartened by some Bible research I did recently on the word power that helped me gain a better understanding of how God governs. Particularly helpful was the idea that the Scriptures—from beginning to end—consistently attribute all power to God, who not only created the entire universe, but also maintains it.

A verse from Ephesians also spoke to my concerns: “Now all glory to God, who is able, through his mighty power at work within us, to accomplish infinitely more than we might ask or think” (3:20, New Living Translation). This verse brings out the idea that God’s unlimited, mighty power is at work within us—not just having an effect within my own familiar circle or my own country, but working in all of us, including all world leaders and governments as well as their citizens.

It is comforting to know that even when progress seems slow or disunity seems to rule the day, we can trust God’s infinite wisdom to continually speak to those in government and their constituents and inform them regarding pathways of peace and progress.

Christian Science, which illumines healing truths found within the Bible, teaches that we are all the children of one good God, divine Love. Although it might appear that our world is governed by divisiveness and competing interests, our prayers can lead us to look through the lens of spirituality to see the true nature of God’s creation.

We can start by praying to better understand that world leaders and all citizens of the world are created spiritually by a completely good creator—we each include the honesty of divine Truth, the care of divine Love, and the integrity of divine Principle. This spiritual view guides us to see that the true nature of all government is upheld by the benevolent government of God. When news reports draw our attention to bad behavior by or instability in leadership, we can prayerfully acknowledge the power of God’s goodness to uplift, save, and adjust.

Several years ago, the news was filled with reports of a power struggle in a distant country, with pro-democracy protesters running into opposition from a totalitarian regime. The Christian Science Monitor and other news outlets were reporting on this, and I decided to pray daily about the situation. I prayed to see the spiritual fact of God’s good government reflected in the individuality of all of the “power players”—even (and especially) those with whom I strongly disagreed.

I was able to challenge the aggressive pictures of self-serving authoritarian leaders doing harm to their citizens. Through prayer, I found an inspired sense of the true identity of the players in this political drama: that they are intelligent, spiritually motivated ideas of their Father-Mother God. Holding to the spiritual view of God’s creation was the inspiration that informed my prayer, moving me to the acknowledgment of the ever-presence of God as the true power on the scene.

It is not always easy to hold to the spiritual view—to see and trust the power of God, good—but I found that persistently disciplining my thought in this direction was a practical path to healing. This discipline of thought led me to be more patient with people in my own social circle, especially when disagreements arose, and I found myself more readily turning to the spiritual view of others rather than reacting or being resentful. A physical problem that I had been praying about for several months was soon healed, and I became more committed to identifying individuals as created spiritually and as expressing Godlike qualities instead of seeing them as mortals bound by limits and subject to discord.

It’s worth it to replace worry with constructive, healing prayer.

When it was reported that the power struggle in the country I’d been praying about had been resolved, resulting in a more open society with new leadership, I was grateful to see the progress. I trusted that the prayers of many, including my own, had contributed to the unfolding peace in the region. I gained a deeper sense of hope and of the potential for healing even when things appear bleak on the surface, trusting God’s care not only for this faraway nation, but also for my own community and country.

On page 340 of Science and Health with Key to the Scriptures Mary Baker Eddy writes, “One infinite God, good, unifies men and nations; constitutes the brotherhood of man; ends wars; fulfils the Scripture, ‘Love thy neighbor as thyself;’ annihilates pagan and Christian idolatry,—whatever is wrong in social, civil, criminal, political, and religious codes; equalizes the sexes; annuls the curse on man, and leaves nothing that can sin, suffer, be punished or destroyed.”

As we pray for our world leaders, let’s keep in mind the biblical admonition in Second Samuel reminding us where true power comes from: “God is my strength and power: And he maketh my way perfect” (22:33). It’s worth it to replace worry with constructive, healing prayer. It helps bring global progress, and we will find that it brings grace-filled adjustments to our own lives, too.

Send a comment to the editors
NEXT IN THIS ISSUE
Article
Can ants destroy a home? 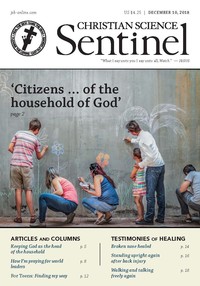