A few years into the 20th century an article of Mary Baker Eddy’s titled “Christmas as in Christian Science” was published in the New York World, a daily newspaper with a readership of over 300,000.

The article still makes for inspiring reading in the 21st century. And that’s not just because it gives us pause in regard to the frivolity and materialism of today that passes for “having Christmas.” Even more importantly, the article brings a dimension to Christmas at the very moment in human history when many are seeking the rediscovery of spiritual foundations, and the world greatly needs to understand Jesus’ example as mapping the way into the future more than a high point of the past.

So, what if Christmas really were about more than a sharing of purchased gifts, a day or so of family happiness, some cards and carols, and then a plunge back into the world with its deathly struggles and ills and terrible news? What if it were about more, even, than a baby who grew up to be the New Testament’s incredibly loving and forgiving Jesus, the man the Bible describes as a healer of the sick and Savior from sin?

In her writings about Christmas, Mary Baker Eddy obviously yearns for us to realize that Christmas is, in fact, about something more. She explains that what was truly happening for the world that Christmas night long ago was in effect the entrance of a whole new understanding of life and its purpose into human consciousness. She wrote that it was “the birth of Truth, the dawn of divine Love breaking upon the gloom of matter and evil with the glory of infinite being” (The First Church of Christ, Scientist, and Miscellany, p. 262).

In the very first sentence of her article for the World, Mrs. Eddy uses that word infinite. She writes that the observance of Christmas in its real meaning tends “to give the activity of man infinite scope” (“The Significance of Christmas,” Miscellany, p. 259). In other words, our catching the actual spirit of Christmas and living with even a degree of its vast meaning can begin opening our eyes to a startlingly new view of ourselves and the meaning of the familiar Christmas story. Instead of being a mortal beset by the perils and limits of material existence, we begin to see good as a much bigger fact than we supposed, and all the good we long for as having its source in God. We find ourselves participating in this infinite rightness governed by the divine Principle, God, who is totally Love.

The human mind tends to mock all this, and says it’s empty words that aren’t practical and can’t be proved. And so long as it holds to its own myopic view, this so-called intelligence misses the all-important point, as it tries to use Christian Science to overcome its tribulations while insisting on its own limited framework in which to look for improvement. It would imagine Christ, or divine Truth, trying to operate within and break out of what the human mind considers the unquestionable reality of material life and existence. Yet the basic message of the revelation of divine Science is the opposite: that we are to learn of God’s new kingdom, an entirely spiritual cosmos—infinity itself—being the actuality of God’s infinitely good creation. When we do catch a real glimpse of this spiritual creation, we experience Christmas not as a marvelous birth in a manger centuries ago, but as the birth of Christ in our lives today.

The truest spirit of Christmas makes us aware of the dawning of an infinite Love.

Most of us don’t grasp at once the full implication of the infinite good of an infinite God who is Life, Truth, Love, Soul, Spirit, and Mind. We read of it and even write of it, but it’s through the natural and continual spiritual experiencing of spiritual facts, and the physical and moral healing that follows, that we learn what is indelible and can never be erased. As the first sentence of the Preface of the textbook of Christian Science promises, those “leaning on the sustaining infinite” find that today is “big with blessings” (Mary Baker Eddy, Science and Health with Key to the Scriptures, p. vii).

In the infinity of being that is God’s creation, there’s nothing left out, no good left undone or incomplete. There’s nothing actually outside this infinite to oppose or reverse or resist. It includes, in Mrs. Eddy’s words, “God giving all and man having all that God gives” (Miscellany, p. 5). No wonder she knew she had discovered an infinite that sustains. We may need to think more, though, about what it means to lean on this infinite. Doesn’t it require a genuine shifting of one’s weight, rather than just touching something lightly and going back into the same position?

But how can you lean on something that’s spiritual and that is generally considered not substantial or practical? Maybe the real question is, How can you not want to depend on the divine Love you’re beginning to find is everywhere, is infinite, and includes you?

The Bible points out the need to stop taking one’s own or the general perception of things as an accurate measure of what’s likely or possible. In Proverbs, for example, we read: “Trust in the Lord with all thine heart; and lean not unto thine own understanding. In all thy ways acknowledge him, and he shall direct thy paths” (3:5, 6).

A friend who is a Christian Scientist recently described a business experience he’d had in this way: He said that for two days before, he had felt he could barely tolerate his circumstances. He felt he was under attack from colleagues and even his own family. But he kept trusting God and moving forward, and the two meetings he had to conduct, with very little time for preparation, were enthusiastically received in spite of the personal coldness and skepticism he’d felt previously. He said it seemed like “stepping into a completely different reality.” He added, “ ‘More true than what had seemed rock solid the day before’ is how I would describe my experience of Christ Science. It is the engine of ‘can,’ the hammer on the thumb of ‘cannot.’ It is what we know ‘is,’ in our heart of hearts, the truth of all things.”

So often we tend to think of the obstacles that Christian Science must overcome in regard to healing. It may be our own less-than-inspired thought or the severity and complication of a physical condition or circumstances that seems to have the power to block progress. It’s then we need the amazing message of Christmas, what can be called the truest spirit of Christmas, that makes us aware of the dawning of an infinite Love—a new, scientific reality that changes all the reference points and brings irresistible healing and joy.

Allison W. Phinney
Member of the Christian Science Board of Directors 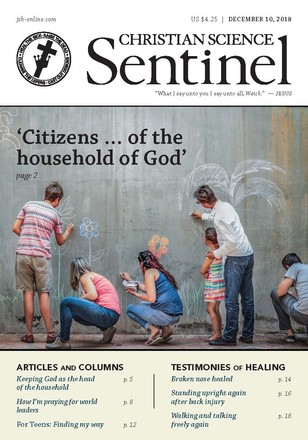 ‘Citizens … of the household of God’

Keeping God as the head of the household

To be a healer instead of a worrier: How I’m praying for world leaders

Can ants destroy a home?

A search for home brought me to Christian Science

Standing upright again after back injury

'That Truth gives promise of a dawn ...'