To some, autumn seems a period of departing beauty, and the sight of leaves falling silently earthward causes a little pang of regret. Yet the old leaves must fall if the tender foliage of spring is to replace them. So each falling leaf should be seen as the promise of fresh beauty on its way.

As Christian Scientists we should be glad to let fall finite and material theories, however traditional, in order that higher ideals may bear fruit in our lives, and human hope and affection be purged and safeguarded by immutable divine Love.

Whoever is earnestly turning his gaze heavenward, yet still occasionally broods unavailingly over his past or his present failings, without correcting them, needs to drop that unreal, outworn concept of himself completely. Every false thinker is unsatisfied, unprogressive, and is apt to shrivel as a leaf that is touched by the frost. But the student of Christian Science, pressing on to salvation, dismisses all retrospection and introspection that is merely gloomy and therefore fruitless, in order that his consciousness may be penetrated with the fact that, as Mrs. Eddy says on page 17 of "No and Yes," "In Science there is no fallen state of being." In other words, the evidence of the five physical senses is not the truth regarding spiritual man in God's likeness. Therefore, if one would cease thinking of himself as "fallen," he must obviously keep thinking of himself as "in Science," sheltered from bleak mortal theories by the spiritual law of well being. One who thinks in line with Truth is never beyond the place of harmony.

Those who are inclined to justify materiality and to look down upon spirituality may learn a lesson from the statement, "Truth is fallen in the street, and equity cannot enter." Truth itself cannot fall, but Isaiah spake thus as he sadly viewed the effects in human experience of rejecting Truth and preferring iniquity to equity. If one were to suffer bad habits to cling to him, he would be depriving himself of the joy of heaven on earth which the Christian Scientist is beginning to glimpse. While this submission to falsity continued there would be, for such an individual, no autumn and therefore no spring, no surrender and therefore no progress.

What does one gain who persistently thinks of himself as merely the temporal inhabitant of a matter body? Mainly variableness, suffering, limitation. And what does the student of Christian Science gain through learning, and increasingly proving, that spiritual man is actually living in the mental realm of limitless and unadulterated good and that there is in reality no other realm? He gains dominion over sin, over disease, over mental torment, and rejoices in the truth of Mrs. Eddy's statement (Christian Science Versus Pantheism, p. 11), "The grand realism that man is the true image of God, not fallen or inverted, is demonstrated by Christian Science." This Science of being gives to human thought the basis of Spirit, not matter; thereby, step by step, corruption is displaced by incorruption. Even as a stream of clear water persistently poured into a vessel filled with uncleanness gradually displaces and replaces the impurity, so the truth of Christian Science appearing in human consciousness through each one's own study and demonstration, purifies and transforms it. The old burdening concepts gradually fall away as a new sense of spiritual buoyancy and mental clarity is gained.

The revelation of Christian Science gladdens human consciousness with imperishable spiritual ideas of health, holiness, and intelligence. Even if, at certain stages of his unfoldment, the experiences of a Christian Scientist seem arid, unhopeful, even as do the bare trees in winter, yet, as he continues faithful in his denunciation of error and his affirmation of Truth, he will find many evidences that Truth's incessant activity is doing its redemptive work in him. So, instead of being moodily absorbed in materiality and failure, the Christian Scientist sets himself to prove that "if God is upright and eternal, man as His likeness is erect in goodness and perpetual in Life, Truth, and Love" (Miscellaneous Writings, p. 79). This mental erectness reverses mental stooping, downward thinking, faith in failure.

Should one, from old habit, credit evil as real or believe it to be inevitable in this earthly experience, let him shed this habit as the tree sheds its leaves in the fall. Let him think "in Science;" then he will certainly outgrow the old cramped and occasionally terrifying views of a selfhood supposedly shut up in a finite body or placed in a confined, monotonous environment. One must give up all rankling feelings, for instance, in order to make way for forgiveness and harmony.

The winds of God, good, scatter the sear leaves of self-pity, in other words, self-love, if we do not tenaciously cling to them. All true thoughts are free to range in the green pastures of infinite Life, ever verdant Truth, unquenchable divine Love. Throughout each day, then, let our thinking be erect, true to divine Principle, gracious, joyous, firm, gentle, so that we may be called "trees of righteousness, the planting of the Lord." 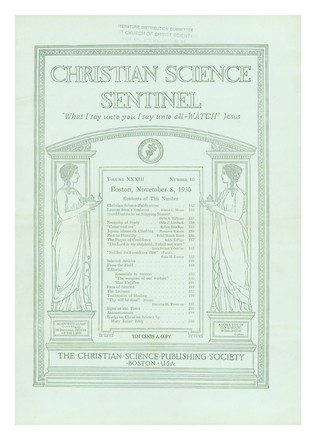 Lessons from a Sunbeam

The Prayer of Confidence

"The Lord is my shepherd; I shall not want"

"Neither do I condemn thee"

In your issues of March 15 and 22 there appear synopses...

"Mary Baker Eddy, Subject of Sermon" is the headline...

Theodore Burkhart, Committee on Publication for the State of Oregon, | November 1930

"The weapons of our warfare"