Building our lives on ­the rock of Truth

One of the most loved sermons ever given, Christ Jesus’ Sermon on the Mount, ends by making the point that before we can ever build up, we must first dig down—way down.

Jesus was likening those who heard and followed his teachings to “a man which built an house, and digged deep, and laid the foundation on a rock: and when the flood arose, the stream beat vehemently upon that house, and could not shake it: for it was founded upon a rock.” Those who were familiar with his teachings but failed to put them into practice he likened to “a man that without a foundation built an house upon the earth; against which the stream did beat vehemently, and immediately it fell; and the ruin of that house was great” (Luke 6:48, 49).

Jesus wasn’t lecturing engineers; those who heard his sermon were from all walks of life. The message was clear: When building our lives and legacies, we have choices. We can dig deep into, and build upon, the enduring foundation of Christly values that bring us health, joy, and prosperity. Or we can build on the shifting, insubstantial, and oftentimes alluring sands of material values that end in lack, limitation, and destruction.

Jesus’ own conviction of man’s oneness with God was the unshakable foundation from which he reversed suggestions of sin, sickness, deformity, and death—prevalent beliefs built on the false foundation of material theories. Having no anchorage that could withstand the force of Truth, those theories fell, along with all the evidence that supported them, and the ruin of those “houses”—those beliefs—was complete.

Jesus’ reference to foundation building is more than just a moral lesson. It also provides a glimpse into the nature of evil, and therefore an understanding of how to disarm its claim to be real.

Since God is Spirit, His creation must be spiritual. Evil, the generic term for sin, sickness, and death, was not made by Him, and therefore has no element of spirituality. It is without a spiritual foundation on which to build itself up or assert itself.

The Apostle Paul’s sense of spiritual warfare begins by recognizing the illusory nature of such imaginary claims and fixing thought on the rock of Christ, or Truth. He says, “(For the weapons of our warfare are not carnal, but mighty through God to the pulling down of strong holds;) casting down imaginations, and every high thing that exalteth itself against the knowledge of God, and bringing into captivity every thought to the obedience of Christ” (II Corinthians 10:4, 5). Christ-based thinking isn’t impressed by evil’s bluster because evil is without foundation, and therefore without power.

Basing my decisions and actions on an honesty founded on the rock of Truth blessed me, my company, and the investor.

While running a business years ago, I had to prepare for what was shaping up to be a difficult board meeting. Several months of declining revenue had left me with little positive news to share with my investors. Then a colleague suggested we could inflate the profitability of the company, not by increasing sales, which is how businesses normally grow, but by reducing future expenses needed to grow the company. That’s like thinking we can make our personal budget look better by going without food! It was an attempt to lessen bad news by ignoring common sense, and it was a recipe for failure. Nonetheless, thinking this would make for a more positive meeting, I followed the advice.

Thankfully for the company, a board member saw through the charade. I was censured for creating an illusion of good news by undermining the principles of good business. Lesson learned.

On another occasion, I witnessed the indisputable benefits of building on the sure foundation of honesty and truth. My company was in discussions with a new investor about a much-needed infusion of money. The investor expressed particular interest in a person we had just hired as our new vice president of sales, noting that he was exactly what the company needed.

Two days before the investment firm was to make its final decision, this employee informed me that he had been offered a dream job at another company and was leaving us. My first thought was that this would derail the investor discussions, and since their decision was only two days away, I considered not sharing the news with them until after the transaction was completed. But as I prayed, it became clear to me that the right thing to do was to tell them about the departing executive before they made their decision, and I called a meeting with the investor.

As God’s children, we are eternally anchored to the rock of Christ.

At the meeting, despite feeling some trepidation, I shared the news. A deafening silence fell upon the room, then smiles gradually appeared. They then told me that my employee was married to one of their colleagues, and she had already informed them of his decision to leave. They wanted to see how I would handle the situation, and my honesty was exactly what they had been hoping to see. They made their decision to work with me on the spot. Basing my decisions and actions on an honesty founded on the rock of Truth blessed me, my company, and the investor.

When confronted with adversity, our best defense is to know that Truth always prevails and that activity based on foundationless thinking has no power to influence us. Evil has no more power to mount any opposition to good than a falling leaf has to stop the wind that carries it. “We must forsake the foundation of material systems, however time-honored, if we would gain the Christ as our only Saviour,” writes Mary Baker Eddy in Science and Health with Key to the Scriptures (p. 326). We have spiritual authority for resisting evil’s claims and asserting the presence and omnipotence of God and His goodness. A loved hymn reads:

Christ, the Truth, foundation sure,
On this rock we are secure;
Peace is there our life to fill,
Cure is there for every ill.
Rock of Ages, Truth divine,
Be Thy strength forever mine.
(Frederic W. Root, Christian Science Hymnal, No. 293)

Our Church is built on the rock of Christ Jesus’ teachings. Human thinking may try to undermine the good that Church does by suggesting that Church is irrelevant, impractical, unpopular, or outdated. But as we stay alert to spiritual truth, we see through these baseless claims and understand our Church’s foundation as spiritual, and therefore unshaken—and unshakable.

Our spiritual foundation is already firmly established. As God’s children, we are eternally anchored to the rock of Christ. Our oneness with the Father is our permanent home, which can never be undermined by the shifting sands of mortal thinking because it stands on the foundation of infinite Love. The only building we have to be concerned with is reinforcing our mental fortress against the suggestion that there is, or ever has been, a material universe that ever had a real foundation in the first place. In this endeavor, we are not alone. As Paul says: “For we are labourers together with God: ye are God’s husbandry, ye are God’s building. According to the grace of God which is given unto me, as a wise masterbuilder, I have laid the foundation, and another buildeth thereon. But let every man take heed how he buildeth thereupon. For other foundation can no man lay than that is laid, which is Jesus Christ” (I Corinthians 3:9–11). Filled with this understanding, we find our lives and legacies firmly established on the rock of Truth, Christ. 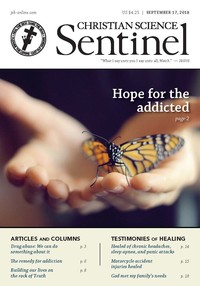