The United States is in the midst of an election season, and many are frustrated at the gulf there seems to be between and within the two major parties. They’re also frustrated at the media coverage, and, at times, a lack of what appear to be real answers to problems facing this country. Much of that frustration surfaces in the form of anger—anger toward parties, candidates, and the media.

The problems with the current election need our prayer, but we ourselves need to be watchful not to get pulled into the pit of anger, frustration, and fear. We can find peace, even amid chaos, through a spiritual understanding of God’s presence and harmonious government.

A friend, who was willing that I share this story, called to ask me to pray with her regarding an uncomfortable skin irritation that had surfaced. I stopped for a moment and listened to God. Before I knew it, these words came into my mouth: “Are you upset about politics?”

“Uh, yes….” She was more than a bit upset about politics! She was livid with the individuals in her political party; she was commenting on social media, watching news programs where commentators and hosts were very polarized about local and national politics, and fixating on the subject.

She was fixed on what she thought other people needed to do, and fixed on the judgment that the world, her nation, and her party were “going down the tubes.”

We talked about the fact that one way to approach healing the polarizing issues was to trust the fact that God is good. We recognized that she needed to take possession of her thoughts—about herself and others, and the welfare of her state and country—and to know God actually is always present to govern and lead humanity forward. God loves everything that He made, and every individual He created—including the true nature of every politician—and because my friend was truly divine Love’s image and likeness, she had the God-given ability to feel and know this.

One important concept was to resist fixing thought on anything unlike the good that God made—as indicated in this statement from Mary Baker Eddy’s book Science and Health with Key to the Scriptures: “Rise in the strength of Spirit to resist all that is unlike good. God has made man capable of this, and nothing can vitiate the ability and power divinely bestowed on man” (p. 393).

Instead of reacting, she could “rise in the strength of Spirit” and not be mentally absorbed by the issues that were disturbing her. Instead, she could trust God and God’s guidance of man.

We agreed to pray along these lines. She felt more in command of her thinking, and we decided to continue our prayers that afternoon. It wasn’t but a few hours later when I heard back from her—she was much more at peace and more settled. Not only that, but the skin irritation had completely disappeared.

Worldly thinking would make us believe that divisiveness is the norm—in the neighborhood association, the local school district, national politics, and relations between countries. The world would accept that divisiveness is systemic and normal. But if God is all power, and only good, it wouldn’t stand to reason that God would, or could, create anything to oppose Himself or His creation. Could a good God create a divide among His ideas? Could a good God create confusion and hatred? No. God, who is good itself, could create only order. Anything that appears to be not of God, ultimately cannot stand. As the Bible says, “For the kingdom is the Lord’s: and he is the governor among the nations” (Psalms 22:28).

We can accept that God governs, and He never leaves a void.

My prayers along these lines have gone like this: God being All, and all good, the natural outcome of God, meaning all that really exists, has to be good. Therefore, there must be tangible, truly right solutions that prayer can help reveal. I’ve found sometimes that means the next steps are revealed; at other times I’ve found the problem just dissipates. But regardless, I’ve seen solutions revealed as I hold to the fact that God’s goodness is ever present, and, therefore, it’s inevitable that we see evidence of it. These solutions can be seen individually and collectively.

As I pray to understand God’s governance, I have found this statement by the Discoverer and Founder of Christian Science, Mary Baker Eddy, very helpful: “To the burdened and weary, Jesus saith: ‘Come unto me.’ O glorious hope! there remaineth a rest for the righteous, a rest in Christ, a peace in Love. The thought of it stills complaint; the heaving surf of life’s troubled sea foams itself away, and underneath is a deep-settled calm” (Message to The Mother Church for 1902, p. 19).

We have a right to know that there is nothing that can oppose God, the creator of good—and to see in our own thought the “heaving surf” give way to “a deep-settled calm.” As it happens in our thought, this in turn brings an uplifting influence to attitudes and events in an election. We can accept that God governs, and He never leaves a void.

As we continue in this election year in the US, it is good to remember that God did make all in His likeness. God is divinely intelligent and made each of us intelligent. As we sincerely pray, we will stay out of any political pit, and, instead, we will be staying with the surety of God’s governance. That calm, spiritual approach inevitably contributes to constructive solutions surfacing. 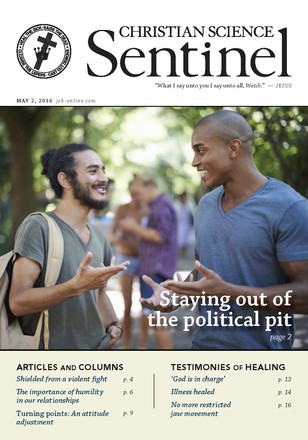 Staying out of the political pit

Shielded from a violent fight

The importance of humility in our relationships

Spiritual expectancy and the Word

At home with Love

‘God is in charge’

'The wilderness and the solitary place shall be...'

Photograph by Peter Anderson | May 2016

Endgame for an opiate epidemic

The divine comfort that heals addiction