I’ve always relied on my own plans and timetables to guide my life. But during my junior year of college, I felt like all my plans were falling apart.

I was applying for many positions during my fall semester, and was convinced that I was going to be a Resident Assistant in a dorm and also get elected to my school’s student senate and my house (dorm) board. My spring semester was all planned out, and I was excited! So when none of those things happened, I was devastated. I wasn’t even on the waiting list to be an RA!

Growing up attending the Christian Science Sunday School, I learned to handle disappointments by praying for God’s direction, though I often struggled to fully trust God. But this time, I didn’t even try to pray, because I felt so lost. I was also caught up in trying to find other leadership positions. I knew that just wanting a leadership position for the sake of having one wasn’t the right motive, but I wanted one nonetheless.

In the middle of my search, I received an email about an annual student-led conference on campus. I’d never considered applying before, but the international focus of the conference had recently become a passion of mine, so I decided to apply. I also applied for a position on the board of a club that focuses on international work.

My spring semester was all planned out, and I was excited! So when none of those things happened, I was devastated.

Despite these opportunities, I was still struggling with a feeling of ego and the need to know how everything was going to work out. I realized that just getting the outcome I wanted wasn’t really going to address those feelings, so I began praying with some passages on the subject of ego from Mary Baker Eddy’s writings.

One idea that really helped me was from her Message to The Mother Church for 1902: “Scientific Christianity works out the rule of spiritual love; it makes man active, it prompts perpetual goodness, for the ego, or I, goes to the Father, whereby man is Godlike” (p. 8). I loved the idea that any good I was doing wasn’t for me, but was in service to God, who, as my Father-Mother, is the source of all my strengths and spiritual qualities.

I also worked on clarifying my purpose for serving in my school community, and on knowing that I could bring good to any situation I found myself in, whether I was in a leadership role or not. This took humility and trust in God, but slowly I began to feel more peaceful and more convinced that I would be able to bless my community regardless of the outcome of my recent applications.

Soon I was offered both positions, and was also elected to the board of my college’s Christian Science organization. As the semester continued, I was grateful to witness how each position provided experiences that gave me opportunities to grow personally and professionally and to help others. I also observed that the positions I’d wanted but hadn’t been offered probably wouldn’t have been right for me, and I admired what students serving in those roles were bringing to the jobs. Even the feeling of ego, which had been driving me the semester before, eventually receded as I understood better that all the good I express actually comes from God. So being and doing good isn’t about the way it makes me look, but about expressing God’s infinite goodness.

Eventually I understood that any good I was doing wasn’t for me, but was in service to God, who is the source of all my strengths and spiritual qualities.

Since this experience, I have genuinely been able to “trust in the Lord with all [my] heart; and lean not unto [my] own understanding” (Proverbs 3:5). This included my first job after college when, four weeks prior to the start date, I learned that the funding for my position had been discontinued. Though the situation seemed stressful, I prayed every day to put my full trust in God. I realized I didn’t need to plan, but simply listen for God’s direction and know that Her goodness is uninterrupted. As I did, a new opportunity quickly fell into place, and I can see now how this new position fits me so much better than the other one would have.

Trusting God and feeling secure in Her direction still isn’t always easy for me. But the more I understand that I can never be separated from God’s tender care, the more I am able to let go of my own plans and feel confident that only good awaits me. And this opens the way to amazing opportunities, which continue to bless me. 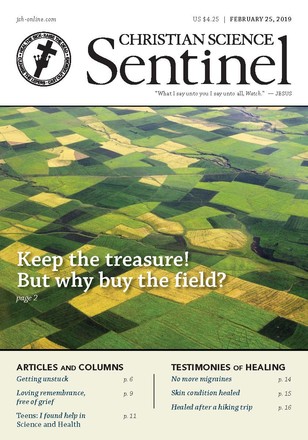 Keep the treasure! But why buy the field?

I found help in Science and Health

When things don’t go the way you planned

Healed after a hiking trip

Our reformation from sin is healing, too