Men may not be more curious and inquisitive now than they used to be, but they have greater opportunity to indulge their curiosity and extend their inquisitiveness. They want to go where no one else has gone, know what no one else has known, and do what no one else has done. They wish to shake off fetters, overcome limitations, and enjoy a freedom never before imagined. And this is as it should be. Limitations have no place in infinity, and we are living in infinity whether we realize it or not.

In the midst of vaunted technological achievements, Christian Science, through spiritual means, is busily engaged in improving the conditions under which men are living. Christ, the divine ideal, is spiritualizing human thought on a scientific basis, making available to men the ability to bring what appears to be human life into accord with the divine realities of being. As a result, we are at least beginning to understand the spiritual nature of the universe in which we live.

Through the spiritual discoveries made by Mrs. Eddy nearly a century ago, we are becoming more acutely aware of the scientific importance of primitive Christianity—Christianity as Christ Jesus established it. The master Christian was thoroughly acquainted with God, the creative Principle of the universe, to whom he referred as Father. He was so familiar with the divine order that he gave consistent evidence of it in his outstanding works.

"Jesus of Nazareth was the most scientific man that ever trod the globe," writes Mrs. Eddy on page 313 of Science and Health. "He plunged beneath the material surface of things, and found the spiritual cause."

Human thought may speculate on what he said and did, but until the spiritual significance of his ministry is gained, his words and works will be considered largely in terms of mystery and the supernatural.

Jesus came with a well-defined mission, a mission with which he was fully acquainted. His origin can be understood only as we understand what Jesus said of himself. In one instance he said to the Pharisees (John 8:14), "I know whence I came, and whither I go; but ye cannot tell whence I come, and whither I go." Then he declared, "If God were your Father, ye would love me: for I proceeded forth and came from God; neither came I of myself, but he sent me."

Human thought attempts to conceive of the fatherhood of God in terms of its own limited sense of personality. It formulates a manlike sense of God. It considers God to be a corporeal being, dwelling in a place called heaven. But the Bible declares that God is Spirit, everywhere present, the divine source of all that really is. The term divine Principle gives a clear sense of God's incorporeal existence as universal cause, the one and only creator.

God being Spirit, man must be spiritual, incorporeal. The incorporeal, spiritual identity of Jesus was referred to as Christ, the only begotten Son of God. When Jesus identified himself with God, he pointed to spiritual selfhood, which is discernible through spiritual sense.

As we read in Science and Health (p. 315): "Jesus' spiritual origin and understanding enabled him to demonstrate the facts of being,—to prove irrefutably how spiritual Truth destroys material error, heals sickness, and overcomes death. The divine conception of Jesus pointed to this truth and presented an illustration of creation."

How one could come from the Father, who is Spirit, and appear in human form is conceivable to the spiritualized human consciousness. The spiritual healing of physical disease is understandable to one who interprets all things spiritually.

The beloved disciple John was so aware of the Master's spiritual identity that he was able to receive the revelation of things which must come to pass and to record them in the last book of the Bible. Speaking of this disciple, Mrs. Eddy writes (ibid., p. 561), "John saw the human and divine coincidence, shown in the man Jesus, as divinity embracing humanity in Life and its demonstration,— reducing to human perception and understanding the Life which is God."

The phrase "the human and divine coincidence"' introduces a scientific conception that enables us to understand how Jesus could be much like other men in appearance and yet be possessed of the divine nature which he derived of his heavenly Father.

This scientific conception enables us to understand that we too have a spiritual identity which we have derived of our Father, who is in heaven. Jesus prayed that all who should believe on him should be one "as thou, Father, art in me, and I in thee, that they also may be one in us" (John 17:21). And he spoke of the glory God had given him.

Divine Science is being accorded its rightful place and is solving human problems that unspiritual thinking is responsible for. The sick are being healed today as they were in the early days of Christianity. Sin is being cast out of human experience as illegitimate. Human life is being conformed to a divine pattern. God's kingdom is being established on earth.

The things which John foresaw and foretold are coming to pass. These are the latter days in which humanity is to be blessed by universal salvation rather than cursed by universal destruction. 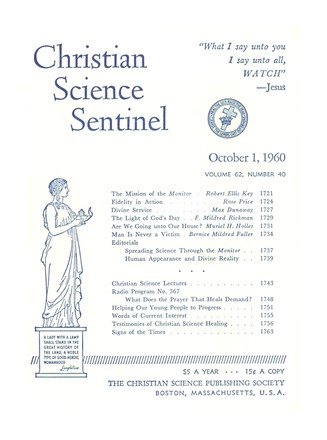 The Mission of the Monitor

The Light of God's Day

Are We Going unto Our House?

Man Is Never a Victim

Spreading Science Through the Monitor

RADIO PROGRAM No. 367 - What Does the Prayer That Heals Demand?

with contributions from Frances Farran | October 1960

HELPING OUR YOUNG PEOPLE TO PROGRESS

Ten years ago, before I became...

For over thirty years I smoked...