I was brought up in religious denominations other than Christian Science. When I was 22 years old, married and with a two-year-old son, I began to realize something was wrong with my health. After a stay in the hospital and procedures that included X-rays and a spinal tap, three doctors diagnosed me with multiple sclerosis. The verdict was frightening, as there was little to no hope for my recovery.

My husband had attended Christian Science Sunday School as a teenager, and when we got home from the doctor’s office, he offered me a copy of the Christian Science textbook, Science and Health with Key to the Scriptures by Mary Baker Eddy. Though he wasn’t practicing Christian Science at that point, he said he knew it could help me.

At first I was in disbelief—how was a book going to help me? I really tried to read it over the next couple of months, but it made no sense to me. Then one day at the library, I found another book on spiritual healing, which talked about how Christian healing is possible but usually a dormant part of religious faith. I no longer remember the title of this book or its author, but it was a revelation. I hadn’t thought I could trust God to heal me, but here were two books stating that healing is possible!

From that time forward, I read and reread my Bible and Science and Health. I would ask God what I should read, then open the books at random. The words of these wonderful books, even when I didn’t understand their message, gave me a spiritual sense that all was well. During this time, I found that I was healed of colds and flu, too.

At a doctor’s examination about a year later, they asked me what I was doing for myself, because I was so much better. At this point, I realized what a great gift I’d been given. I felt God’s loving arms around me.

I should mention that at this time in my life I was very anti-church. I felt I could just trust God and He would show me what to do. So I didn’t go immediately to Christian Science church services, and I was hesitant to call a Christian Science practitioner to pray with me. I continued to read on for about eight years, but the “big” healing—being completely free of the condition—eluded me.

Finally my husband and I started to attend Christian Science church services, and our children went to the Sunday School. About four months later, I had severe symptoms of multiple sclerosis once again. I knew my only goal was to make progress in my quest to understand God and my relationship to Him. This retrogression wasn’t right. So the next day, still feeling great hesitation, I went to visit a practitioner. I’d often read about God, who is all good, and man, who is His image and likeness, but it was wonderful to hear the practitioner explain these ideas so clearly and lovingly. For about four months these visits continued. Then one day the practitioner asked if there was something I needed to tell her.

I hesitated at first, but finally the words came forth: when I was 15 and suffering from asthma, I’d had a near-death experience after being taken to the emergency room. I remember that I didn’t want to die—I wanted to come back—and suddenly I was awake with my mom and dad in the room. I was alive. The asthma attacks lessened after that.

Upon hearing this, the practitioner said with so much joy that what I had experienced as nearly dying was like a bad dream. Life, God, is the reality always, and death is only a human belief. As that idea sank in, a voice rang within me: “You are healed! You are healed!” That message kept repeating to me for two days.

I was indeed healed: I never again suffered from symptoms of multiple sclerosis. I should mention that the last time I visited the doctor, he put his hands on my shoulders and said, “God bless you.” I was never scheduled for further appointments.

This healing took place 40 years ago, and is proof to me of what Eddy says in Science and Health: “If the belief in death were obliterated, and the understanding obtained that there is no death, this would be a ‘tree of life,’ known by its fruits” (p. 426). On that same page she adds, “The relinquishment of all faith in death and also of the fear of its sting would raise the standard of health and morals far beyond its present elevation, and would enable us to hold the banner of Christianity aloft with unflinching faith in God, in Life eternal.…

“If it is true that man lives, this fact can never change in Science to the opposite belief that man dies.… Man’s individual being can no more die nor disappear in unconsciousness than can Soul, for both are immortal. If man believes in death now, he must disbelieve in it when learning that there is no reality in death, since the truth of being is deathless” (pp. 426–427).

I now look to see life as the reality and death as an illusion. I am now thoroughly convinced that consciousness never stops. I’m grateful to know that we are all in a constant state of progress, ever alive and ever awake to the true spiritual being.

Suzann Wittenberg
Round Lake, Illinois, US

I viewed my wife’s healing at first with cautious optimism inasmuch as her ailment was known for lengthy but temporary remissions. Nonetheless, from that point on, she stopped falling down. As the years without a return of the symptoms became decades, my optimism became gratitude for a complete and permanent healing that also changed my life in its wake.

At the time, a culture of social drinking had overwhelmed any interest in religion for me. More accurately, I was by then a stage two alcoholic, also known as a “problem drinker.” As my wife turned to prayer in Christian Science, I won my freedom, appreciating life instead of escaping it. 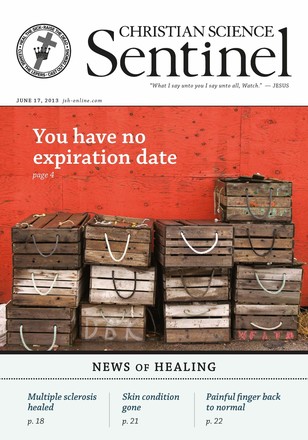 You have no expiration date

From the Christian Science Board of Directors: New readers of The Mother Church

Questions (and answers) about origin

By Suzann Wittenberg with contributions from Larry Wittenberg | June 2013

Painful finger back to normal