Have you ever wondered why we hear the word chaos mentioned so often these days? The first time this word grabbed my attention was about a decade ago while I was finishing my postgraduate studies. A professor stated at the end of my last course that the historic quest for truth by the world’s philosophers is now over, because they have found that there is no truth, and all that’s left is chaos theory.

Chaos theory deals with unpredictability. Some dictionaries define chaos as complete disorder and confusion. But isn’t there a higher intelligence of the universe that governs in an orderly manner?

Mary Baker Eddy, who discovered Christian Science, wrote in Science and Health with Key to the Scriptures, “Few deny the hypothesis that intelligence, apart from man and matter, governs the universe; and it is generally admitted that this intelligence is the eternal Mind or divine Principle, Love” (p. 270). But she also says, in the same book, “The question, ‘What is Truth,’ convulses the world” (p. 223).

The Bible repeatedly alludes to the fact that God is Truth. The omnipresence of Truth challenges the disturbance and commotion of fears and their evil effects. Examples of chaos seem commonplace today: irregular weather patterns, wild swings in the stock market, tumultuous political upheaval, physical disorders, and family breakups. Yet chaos is nothing new!

The book considered by many to be the oldest in the Bible depicts a respectable, blameless man named Job experiencing heartbreaking chaos when he suddenly loses his health, his household, his wealth, and his faith in God’s goodness. It appears that he will have to succumb to the age-old acceptance of evil as the reality.

Evil is only the supposition that God, good, can be absent. Accepting this supposition allows malevolent events to occur. Even if we love God and have received many blessings, our fears can be fueled if we accept the false belief that evil is real and has the power to cause trouble. Job declared, “The thing which I greatly feared is come upon me, and that which I was afraid of is come unto me” (Job 3:25). Nevertheless, Job continued to search for God’s wisdom, and by gaining a more spiritually inspired thought, he finally learned that “to depart from evil is understanding” (28:28). Ultimately, Job was recompensed and fully restored even beyond his previous status by turning to and trusting God, Truth, instead of submitting to the fears and dark depictions of evil.

The New Testament relates that Christ Jesus challenged chaotic occurrences—which appeared as turbulent storms, violence, grave sickness, and so on—by demonstrating divine laws of peace, power, and health. With spiritual authority and fearlessness, Jesus proved God’s, Truth’s, law of harmony as supreme, and offered it to humanity. Science and Health states, “Christian ideas certainly present what human theories exclude—the Principle of man’s harmony” (p. 170). God’s fundamental truths of universal safety and well-being are for everyone, and we can accept spiritual harmony as reliably lawful in overcoming discord.

We can trust God’s law of harmony when we are confronted by sudden chaos. One dark autumn night as my husband and I were driving home, we were entering a busy downtown intersection in our capital city when I spotted a man crossing less than twenty feet in front of us. A split-second thought said that we would hit him, but then I heard the “ ‘still, small voice’ of Truth” (Science and Health, p. 323) saying, “No,” and I yelled out, “Stop!” My husband jammed on the brakes. The truck next to ours swerved sharply, and the car behind us rammed into us.

As these events rapidly transpired, I lifted my thought to the Divine, trusting that we would see God’s harmony expressed. I felt calm, and as my husband and I spoke with the other drivers, they seemed calm, too—one of them confirming that he had seen the man who had crossed in front of us walk away unhurt. The driver who hit us was uninjured even though he had not been using his seatbelt. Since his car was leaking fluids, we asked if it needed towing. He smiled and declined, explaining that his uncle owned the mechanic shop right across the street, so he’d just push his car there. When we looked at the rear bumper of our vehicle, we found that there wasn’t even a scratch on it. The police arrived and, noting that there was no damage or injury, quickly left. Everyone went on his way, unharmed and unconcerned.

Yielding to the laws of divine Principle provides protection from intruding fears and inharmonious outcomes.

That night, instead of submitting to what looked like an unavoidable accident, we were witnesses to the spiritual truth that harmony, not chaos and crisis, is the law of God—and an incident that could have resulted in severe injury or death was rendered almost completely harmless.

Based on the spiritual fact that God, Truth, is the only creator of the universe, including man, we know that God, good, didn’t create the dark notion of accident because accidents aren’t good. In the Bible we read, “And God saw the light, that it was good: and God divided the light from the darkness” (Genesis 1:4). So a vital first response when an accident occurs or seems unavoidable is to look and listen for what God is saying. In Science and Health we read, “ ‘Let there be light,’ is the perpetual demand of Truth and Love, changing chaos into order and discord into the music of the spheres” (p. 255).

The light of Truth is here to bring harmony to any dark situation. Divine Love’s comfort and guidance, encompassing everyone involved, can inspire our response. Yielding to the laws of divine Principle provides protection from intruding fears and inharmonious outcomes. No matter what threatens us, from imminent actions to future plans, we can refuse to submit. Instead, we can lean on God’s dependable guidance to steer us to healing outcomes. Anyone can learn to do this.

Challenging fears about continual chaos requires lifting our thought to Truth’s law of harmony. Each one of us can see randomness removed from the realm of possibility. Science and Health tells us, “Truth is revealed. It needs only to be practised” (p. 174). 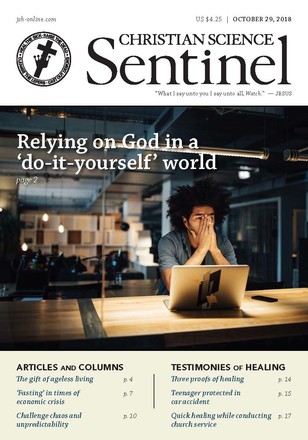 Relying on God in a ‘do-it-yourself’ world

The gift of ageless living

‘Fasting’ in times of economic crisis

Walking home from school with God

'My voice shalt thou hear in the morning ...'

The pressure we want