A petition which every Christian makes when he says the Lord's Prayer is, "Thy will be done in earth, as it is in heaven" (Matt. 6: 10). The author of this great prayer made Truth practical for mankind, as his many healing works attest. Christ Jesus not only acknowledged a heavenly kingdom, in which God's will is done, but brought that kingdom into realization for mankind. Those whom he healed felt the power and authority of the divine will as it was brought to bear upon disease and sin, danger and lack, and even upon death. Jesus showed that the needs of the body are invariably supplied when God's will for man is demonstrated as the truth.

In order to prove the universality of God's control, one must realize that His kingdom is the only kingdom, and one must gain clear views of it. One must be able to look beyond the temporal, mortal sense of life to the spiritual and immortal reality. Christian Science helps one to attain glimpses of the realm of Spirit, which bring the divine control into his immediate experience. So powerful is the truth that a moment of realization of what actually exists can destroy sickness in its most bitter stages.

Mary Baker Eddy says in "Science and Health with Key to the Scriptures" (p. 162), "Experiments have favored the fact that Mind governs the body, not in one instance, but in every instance." Experiments in Christian Science involve the realization that God is All; that He governs all; that He is the only Mind; that His idea is His subjective state and is completely subordinate to His will; that body is idea, not matter. As one turns to the spiritual state of being and becomes conscious of its truth and presence, reality shines through his human sense of life, and insubordinate mortal beliefs are subdued. God's will is proved to be the only controlling force of his consciousness and consequently of the concepts of his consciousness, including his body, its functions and its conditions.

We learn through Science that any spiritual fact is a divine law and can be proved supreme over the particular error that denies that fact. For instance, the following statement of fact describes the divine law of healing (ibid., p. 507): "Infinite Mind creates and governs all, from the mental molecule to infinity." Spiritual conviction of the fact stated here destroys the mortal conviction of a governing power which is contrary to the truth, and healing follows immediately.

God's control of the physical body is a necessary step out of the delusion that man is a mortal and possesses a material body. Eventually, when one's spiritual identity is fully understood, the flesh will disappear as it did in the Master's ascension. Jesus' words (John 6: 63), "It is the spirit that quickeneth; the flesh profiteth nothing," are now understood through Science, which explains fleshly conditions as a dream, or mesmeric illusion, from which mankind need to be awakened.

To be roused from a mesmeric state, it is essential that one cling to the fact that God is the only Mind. To prove Mind's government of the body, it is necessary that one know that Mind's government is the only government. To rid one-self of the belief in a sick body, one must be consistent in realizing that his only body is his spiritual identity, his only substance the pure activity of God's reflection. Health is an element of that activity, and health is a spiritual fact which exists simply because the Principle of all being is divine Love.

Humanity needs to become conscious of Mind's universal control at every point. In international relations, in national affairs, in community, church, business, and family circles, God's government must be proved supreme. But in order for the individual to function freely and to contribute to the spiritual progress of the world, he needs to be healthy.

The frustrating, binding, debilitating effects of a sick body should not be permitted to persist. The demonstration of Mind's supremacy and authority removes the limitations seemingly imposed by the flesh. Thought is thus released from aches and pains, stiffness and inertia, overaction and inaction. And the individual, restored and liberated, is no longer impelled to give his attention to the body, but can devote his thoughts to useful pursuits.

All physical discomfort is the result of human will, and the demonstration of the divine will corrects it. One can scarcely read the recorded words of the master Christian without realizing that his life purpose was to destroy the seeming action and effects of human will with the power and control of the divine will. Every healing that Jesus effected, every situation he righted, his resurrection, his ascension—all proved that God's government is entire and good. The Master's matchless and pure realization of the one controlling Principle of the universe brought heaven to earth.

Jesus is our Way-shower. He said we could do his works, even greater ones. Through applying the truths of Christian Science, we can reflect God's will in the control of our bodies as well as in the control of our morals and our individual characters. And we shall succeed in bringing that control into our present experience when we become fully convinced that the divine Mind is All and governs all. 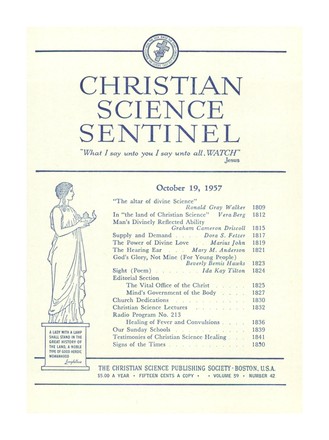 "THE ALTAR OF DIVINE SCIENCE"

IN "THE LAND OF CHRISTIAN SCIENCE"

THE POWER OF DIVINE LOVE

GOD'S GLORY, NOT MINE

THE VITAL OFFICE OF THE CHRIST

MIND'S GOVERNMENT OF THE BODY

RADIO PROGRAM No. 213 - Healing of Fever and Convulsions

I pray as I write this testimony...

I wish to express my gratitude to...