When we think God’s thoughts, we are seeing the goodness, love, and tender compassion that are innate to God’s universe.

When I was a teenager, I would occasionally help my sister by taking her job of delivering newspapers. One morning I encountered an older woman who shouted anti-Asian epithets at me, telling me to go back to my country. It was the first time I had ever encountered hostile racism, and I was quite shaken by these comments.

I had grown up moving every few years from one country to another, and neither Japan (if defined by race) nor any other country (if defined by nationality) felt like “my country.” This wasn’t a happy time in my life. We had moved rather precipitously to this latest country, and I did not like my school and missed where we had lived before. The incident that morning made me feel even more out of place.

That night I was still roiling inside about what had happened, furious that I hadn’t had the presence of mind to come up with an equally nasty response. I was irritated that we were living in this country because of my father’s job, and secretly I was sad because I didn’t feel that I had a country to go back to anyway!

I talked with my father, asking him how I should think about what I had experienced that morning. He told me about a Japanese friend of his living in the US during World War II who had been effectively “interned” at the college she was attending. She had once said, “I do not have to think American thoughts. I do not have to think Japanese thoughts. I have only to think God’s thoughts.” This comment had freed my father from feeling bound by nationality, and he began to understand better how to think as God does. (The Sentinel published my father’s testimony in which he shared this change in his thought; see Takashi Oka, August 10, 1946.)

We have to go beyond a materially defined sense of self to the unselfed love that comes from a spiritual point of view.

I can’t say that this comment was particularly helpful to me at the time. I was still too wrapped up in wanting some kind of retribution. But in the many years since that incident, I’ve sought to understand what it really means to think God’s thoughts.

Obviously, God’s thoughts must originate with God. So, to know such thoughts, it’s important to understand who and what God is. I’ve found it helpful to go to the Bible and the Christian Science textbook, Science and Health with Key to the Scriptures by Mary Baker Eddy, to get to know God better.

Science and Health says, “God is Spirit; therefore the language of Spirit must be, and is, spiritual” (p. 117). God’s thoughts are communicated through the language of Spirit. How do we learn to speak this language? In moving around the world throughout my childhood, I learned to watch closely and really listen to understand what someone was saying, because I was often in situations where my language skills were not those of a native speaker. I found that communication through the eyes, gestures, and intonation always gave a fuller meaning than the words alone.

In much the same way, learning to speak the language of Spirit requires turning from the words and engaging with our spiritual sense. In Science and Health we read, “Spiritual sense, contradicting the material senses, involves intuition, hope, faith, understanding, fruition, reality” (p. 298). Spiritual sense takes us beyond words to the communication that is really coming from God. These are thoughts that express goodness, kindness, peace, harmony, wisdom. The angry and hurt feelings I felt that morning, and the desire to lash out at the woman or to move to a different country, were not thoughts that expressed the intuition, hope, and ever-present reality of God’s creation, which is completely good, and in which God and man are inseparable.

There is no outside to this spiritual truth of our inseparability from God. It includes every man, woman, and child, whatever their race, culture, or religion. Harmony, justice, and peace are permanent, ever-present expressions of God’s creation. When we think God’s thoughts, we are seeing the goodness, love, and tender compassion that are innate to God’s universe.

I was starting to understand that when my father spoke of thinking God’s thoughts instead of thoughts that defined him by race or nationality, he was showing me that we all can identify ourselves spiritually because of our eternal unity with God.

I set aside time to really pray and study the Bible and Science and Health. I was struck by this statement: “The prayer that reforms the sinner and heals the sick is an absolute faith that all things are possible to God,—a spiritual understanding of Him, an unselfed love” (Science and Health, p. 1). I realized that “unselfed love” isn’t merely about being more generous. This love does not originate from a material standpoint but from a spiritual point of view—from what God sees and knows about each of us as His loved children.

Currently in the US, we are going through a national reckoning around race and identity, much of which is being brought to the surface because of the pandemic. Incidents of prejudice and violence, including against Asians, have exposed the complicated status of race relations in this country, despite the progress that has been made.

Professor Anne Anlin Cheng describes the entangled nature of this issue in an Op-Ed piece in The New York Times. She asks “. . . why is entanglement important? Because the challenge of democracy is not about identifying with someone like yourself (that’s easy to do) nor about giving up your self-interest (that’s hard to ask). It’s about learning to see your self-interest as profoundly and inevitably entwined with the interests of others” (“What This Wave of Anti-Asian Violence Reveals About America,” February 21, 2021).

In order to truly see one’s self-interest as “entwined with the interests of others,” we have to go beyond a materially defined sense of self to the unselfed love that comes from a spiritual point of view—thinking and acting on the basis of God’s thoughts. This higher sense of self removes the belief that safety and confidence are uncertain or reserved only for certain people. And we find our safety and confidence in the spiritual truth that holds each of us in relation to God, who loves and maintains each one of us as precious and unique expressions of His infinite creation. We can effectively confront racism and injustice when we see that we are all embraced in God’s love.

In my working career, I have experienced both racism and sexual harassment, and I have struggled with the desire to lash out and get back at the perpetrators. While I took proper steps to report the incidents, harboring hateful feelings kept me in a dark and angry place. Peace came only when I let go of identifying myself as a victim and others as unable to change their ways. The more I prayed to think God’s thoughts, the more I could see that God’s love is deeper, higher, greater, and more inclusive than I had ever imagined.

Mrs. Eddy’s instruction to “love more for every hate” (“Mother’s Evening Prayer,” Poems, p. 4), has been the only surefire way I have found to remain at peace with the whole of God’s creation, and to feel the confidence and assurance that come with thinking God’s thoughts.

Send a comment to the editors
NEXT IN THIS ISSUE
Keeping Watch
What’s my history? 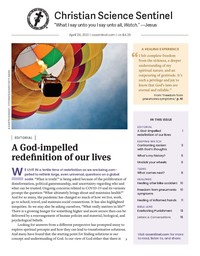