"Get thee behind me, Satan"

To whom did Christ Jesus, when he was tempted in the wilderness, speak the words recorded in Luke's Gospel, "Get thee behind me, Satan"? Certainly not to a personal devil, as person to person, but to personal sense, falsely claiming intelligence, presence, and power apart from God. This adversary, speaking through our own or others' false mortal thinking, as Jesus stated, is "a liar, and the father of it;" and its only chance of being heard lies in our acceptance of it as true.

Whatever the temptation,—be it a claim of sickness, of sin, or of unhappiness,—error, erroneous mortal belief, always tries to induce us to affirm: I am sick; I am sinful; or, I am unhappy; and only as we are awake to the truth and refuse to accept and echo these lies of personal sense, can we say to them with a conviction born of spiritual understanding, "Get thee behind me, Satan," and so prove their unreality, as did the great Master, who refused to admit the arguments that true riches are to be found in materiality, and that he could worthily use his spiritual power for material ends. After Jesus had silenced these lies, the devil departed, or disappeared into its nothingness; and Jesus thus proved that evil is nothing, no person or thing.

As related in the Bible, Daniel also had to overcome the lies of the devil or evil, hatred and persecution speaking through a deluded king. Many students of the Bible are familiar with the two pictures which show Daniel in the lions' den. In one we see him squarely facing the lions, calm and undisturbed. In the other we see him looking upward, with the lions crouched behind him! He too had spoken with authority to the evil beliefs of hatred and cruelty, and had turned from them, leaving Satan behind; in other words, refusing to regard evil as having power. And not only was Daniel himself released unhurt from the lions' den by his reliance on God's power, but the king was sufficiently enlightened to acknowledge the omnipotence and omnipresence of God, the living God, who "delivereth and rescueth."

From Daniel's mental attitude we may learn how to approach our problems. First of all, we need the moral courage honestly to face any given situation. Does the difficulty call itself disease, sin, hatred, impurity, and claim to belong to our brother or to ourselves? Let us not ignore it, but look it squarely in the face long enough to see what it claims to be, and to know what in reality it is not. Evil is nothing; it is only a lie about God's man, the pure and holy expression of Himself. The real man knows his perfection, because he knows himself as the reflection of God, and he knows nothing of any mortal belief to the contrary. As we realize this truth, which is taught in Christian Science, we can do as Daniel did, turn from evil belief and, looking upward to the light of spiritual reality, patiently and trustingly await Truth's inevitable triumph. Thus we shall be putting into practice the rule our beloved Leader gives us in "Unity of Good" (p. 20), when she speaks of rectifying a mistake "by seeing it in its proper light, and then turning it or turning from it." In proportion as we do this we scientifically put Satan—the suggestion of evil—behind by demonstrating its nothingness. Is it not our blessed privilege as Christian Scientists to deal in this way with all the discordant conditions which material sense seems to present to us?

Let us beware of accepting as real the mortal models, of which Mrs. Eddy says in the textbook, "Science and Health with Key to the Scriptures" (p. 248): "Do you not hear from all mankind of the imperfect model? The world is holding it before your gaze continually. The result is that you are liable to follow those lower patterns, limit your lifework, and adopt into your experience the angular outline and deformity of matter models." She adds, however, "To remedy this, we must first turn our gaze in the right direction, and then walk that way." We "turn our gaze in the right direction" when we keep our "eye single"; that is, when we acknowledge God and the perfect man as the only reality. And we must also "walk that way." We must follow in our daily life the Christ-example as far as we understand it.

This is what Christian Science enables us to do; for, thanks to its sacred teachings, we can now understand the words and works of our dear Master. By a humble and prayerful study of the Bible and the Christian Science textbook, we may learn to discriminate between the unreal, "the imperfect model" of materiality, and the real, the perfect ideas of divine Mind.

Can we ever be grateful enough to the Discoverer and Founder of Christian Science, Mary Baker Eddy? Who shall say how often she had to combat the evils of hatred, envy, and persecution? But she walked bravely on, ever looking toward the light until divine Science was revealed to her and through her writings given to a waiting world. In her illustrated poem "Christ and Christmas" (p. 17) we see a picture with the legend "Seeking and Finding," in which the serpent is placed behind the woman, who watches and prays. So must we watch and pray "to behold and to follow this daystar of divine Science, lighting the way to eternal harmony" (Science and Health, Pref., p. vii). Christian Science has revealed this way to eternal harmony, and all who will may walk therein, guided by the glorious light of Truth. 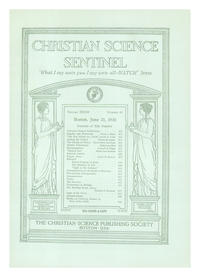