What is man’s true nature?

The importance of having a role model, someone to be looked to and used as a guideline for one’s own life, is a widespread idea today. We just want to be sure we’re looking at the right one. This week’s Bible Lesson, “Adam and Fallen Man,” from the Christian Science Quarterly addresses this by highlighting the emptiness of one man, Adam, and the power and blessings of another, Christ Jesus.

This Bible Lesson draws from the two distinct sources of Genesis, which tell profoundly different stories of creation. Since the 17th century, Bible scholars have explained these differences by highlighting two major authors of the early chapters, based on their names for Deity. Genesis 1 through 2:3 uses Elohim for God, while the remainder of Genesis 2 through Genesis 3 uses the proper name Yahweh and Elohim, translated as Lord God. The Yahwist writer is responsible for the long narrative sections of Genesis, beginning with the story of Adam and Eve (see Sections 1 and 2 of the Lesson) and continuing through Abraham’s family stories.

Although there has been scholarly debate for many decades over what seem to be conflicting accounts of creation, Mary Baker Eddy clears up the confusion in a single statement. Describing the chapter 1 story of creation first, then the inverted description of man in chapter 2, she writes, “Man reflects God; mankind represents the Adamic race, and is a human, not a divine, creation” (Science and Health with Key to the Scriptures, p. 525, citation 5). This is not an abstract theological statement, but the basis on which we claim our spiritual inheritance, which brings healing.

Again, Science and Health illustrates the profound second portion of its title (with Key to the Scriptures) by explaining: “We have nothing in the animal kingdom which represents the species described,—a talking serpent,—and should rejoice that evil, by whatever figure presented, contradicts itself and has neither origin nor support in Truth and good” (p. 529, cit. 11).

Paul made use of the serpent metaphor when he worked with the Corinthian church, which was facing its own problems with temptations of sensuality: “I fear, lest by any means, as the serpent beguiled Eve through his subtilty, so your minds should be corrupted from the simplicity that is in Christ” (II Corinthians 11:3, cit. 9).

The “simplicity that is in Christ” to which Paul refers was not simply devotion or allegiance to the man Jesus, who was far more than a role model of good behavior. Jesus proved man’s true, spiritual nature, the very image of God identified earlier in Genesis 1, not just for himself but for everyone. In one instance, Jesus heals a woman with a long-standing issue of blood (see Luke 8:43–48, cit. 15). What a biblical reversal of Eve’s supposed mortal, fallen identity!

This Bible Lesson, like the final scriptural citation from Jude (see 1:24, 25, cit. 23), gives God the glory for man’s dominion and perfection—and gives us a reason to be deeply grateful.

Send a comment to the editors
NEXT IN THIS ISSUE
How I Found Christian Science
Thank you, God 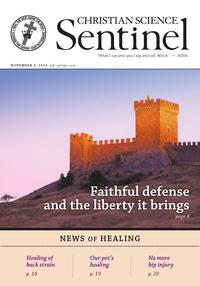