These certainly seem like toxic times when it comes to political discourse around the world—from endless arguments in the United Kingdom between Brexiteers (wishing to leave the European Union) and Remainers (wishing to stay), to fierce divisions over who is the legitimate president of Venezuela, to polarized views of the way forward for America between the major parties in the United States.

It often seems as if feeling or facing rage is the price we have to pay if we want to stay informed and engaged. So we might ask ourselves, “How do I keep anger at bay while still caring about the issues that matter?”

A starting point for me has been to ask myself how I’m perceiving those who hold firm to positions I disagree with. In this regard, a comment made by the previous US ambassador to the United Nations as she was stepping down from the role has been thought-provoking. Addressing a charity dinner in New York City, Nikki Haley said, “In our toxic political life, I’ve heard some people in both parties describe their opponents as enemies or evil…. We have some serious political differences here at home. But our opponents are not evil, they’re just our opponents” (CNN.com, “Nikki Haley: ‘Our opponents are not evil, they’re just our opponents’,” October 19, 2018).

To take that line of reasoning even further: There’s an underlying spiritual perception of others that makes it impossible for us to view anyone, including any politician, as a genuine enemy. This perception is that whatever negative qualities we might associate with them aren’t unalterable or actually a part of what they really are. It’s a spiritual fact that every individual, whether we know them personally or via media coverage, is in reality spiritual and created by God, the source of all good. We are all created to express the divine nature—as God’s very own spiritual reflection.

Because man as God’s spiritual reflection is what truly exists, whatever doesn’t exemplify this identity, even in those we might be tempted to fear or hate, is not what they really are as sons or daughters of God. Likewise, any view we may have of ourselves as prone to get provoked, riled up, or even filled with hatred toward another person is not an accurate perception of what we really are, either.

This doesn’t mean ignoring, condoning, or resigning ourselves to wrong behavior. It means we challenge the fear of being subject to events beyond our control as the subtle whispering of what could be called the most deceptive spin agent of them all: the mentality that perceives life and mind as material and inevitably prone to evil as well as good.

Gaining a more spiritual outlook defuses fear by awakening our thoughts to bear witness to the good already at hand.

The Bible calls this mentality the carnal mind, and its every intimation that evil is more powerful than good has to be “spin” because the Scriptures promise us that “God saw every thing that he had made, and, behold, it was very good” (Genesis 1:31). Instead of accepting the carnal mind’s false view, we can pray to see the continuing presence and power of the good that God always beholds. In doing so, we begin to discern that evil doesn’t really have the power it may appear to have.

I saw this when dealing with someone whose actions so deeply distressed me that seeing them as God’s creation—made to glorify Deity’s goodness—seemed too hard. But I persisted in praying based on a central observation concerning Christ Jesus in the teachings of Christian Science. In Science and Health with Key to the Scriptures, Mary Baker Eddy writes, “Jesus beheld in Science the perfect man, who appeared to him where sinning mortal man appears to mortals” (pp. 476–477).

Through his extraordinary record of healing both sickness and sinfulness in others, Jesus proved the good that can be accomplished by holding to the true view of our fellow men and women as God’s expressions. As I humbly strove to do this, my fear and resentment of the man who had aggrieved me finally lessened, and the situation was soon resolved.

Isn’t this an approach we can take in the political arena, too? Rather than getting drawn into the toxic mental atmosphere of hating a candidate whose words and actions tempt us to react in that way, we can help to heal it. We can pause and pray, and in that prayer we can identify whatever would speak to us of the existence of an unspiritual man or woman, and challenge our acceptance of that false, material conviction. To do so isn’t to shy away from difficult situations. Gaining a more spiritual outlook defuses fear by awakening our thoughts to bear witness to the good already at hand—and to gain confidence that it always will be. It helps us sustain the mental equilibrium and poise by which we can pray with inspiration to support the emergence of ideas that meet humanity’s needs. And it undergirds the courage needed to take any practical action we feel divinely inspired to take.

Whether we back the winning or losing candidate in any election (wherever we are in the world, and no matter how high the stakes seem to be), we can persist in our commitment to perceive the spiritual view of one and all. In this way our very words and deeds will be cast on the side of exemplifying God’s law of goodness and will stand as a vote against the spread of division, hatred, and fear.

This article was originally published as a web original for the Christian Science Sentinel on October 31, 2018.

Rise Above the Turbulence!

Occasionally when traveling by air, we may have heard the voice of a stewardess over the microphone: "Ladies and gentlemen, we are experiencing a little air turbulence. Would you please return...

Many of us would agree these are partisan and polarizing times, whether it’s one government trying to influence another country’s citizens or various ways politicians try to get votes in their own... 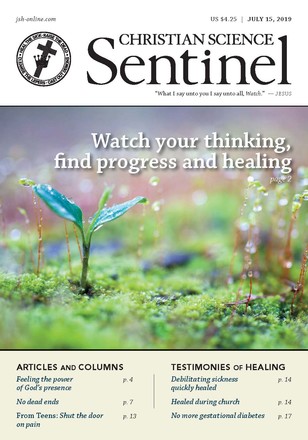 Feeling the power of God’s presence

Care for the caregiver

A performance review? Don’t sweat it!

Shut the door on pain

No more gestational diabetes and no aftereffects