Niklas Hathaway
A healing I had two years ago proved to me that prayer helps with everything. For most of my life I did not think Christian Science held much potential for me. I was certain it was extremely powerful, but I felt results from prayer were out of my reach.

I was raised in Christian Science, so I didn’t actually search for it. It was just an ordinary part of my life. This is not to say that I wasn’t dedicated about it, but I really hadn’t grasped the power of turning to God for healing. For at least ten years, I had been lying to myself that I hadn’t ever had a proper healing. I see now that healings were happening all over, everywhere. I believe that it’s a healing to see a healing! Healings are constantly happening to you and to everyone. Even small healings should be acknowledged.

Two years ago, I was about to attend my freshman year in high school at Principia, a school for Christian Scientists. Just about when school started, the freshman class boarded three school buses. The faculty had informed us that we were going to the City Museum in downtown St. Louis. Everyone seemed to know what it was, and they were excited.

When we finally got there, the wait was well worth it. It was like a playground for teens, and I couldn’t have been more thrilled. I’ve always been a climber (same as my dad!). After a couple of hours of climbing and playing around, my friends and I decided to go into the cave section of the museum. (The museum had a man-made concrete cave on the first floor.) I was with my friends and we went through a long tunnel, crawling on our knees. When two of my friends got out of the tunnel, they called to me to hurry up, so I did.

I got out of the tunnel and lost my footing. There was a small pond to the left and I tried to jump across it. But, as I was jumping, I noticed a part of the exhibit coming from the ceiling. It was too late to dodge it. My head hit very hard, and I ended up being ricocheted to the other side of the pond. I didn’t notice anything was wrong until my friends looked at me in shock. Then I started to feel pain. My head wasn’t hurting too bad, but I saw some blood on the floor. Soon, a faculty member took me to a small office, where someone on staff at the museum wanted to have a look at my head. I tried to keep my thought as composed as possible, not to freak out or lose my cool.

After the staff member at the museum cleaned me up and bandaged the wound, she said I might need to take antibiotics. But I knew what I most needed was some quiet time to pray. There was too much noise at first. But the friends I was with were quiet, and I liked that they were giving me quiet support. I was drowsy, and felt like I wanted to sleep, but was able to stay alert and awake on the bus ride. During my stay at the museum and on the trip home, I was always lovingly accompanied by a chaperone.

When I saw the break in the clouds, the calm sea ahead, I did not look back.

When I got back to campus, I talked to my parents, and then the “House Dad” at my dorm took me to see the Christian Science nursing staff on campus. The Christian Science nurse had to shave my hair so that she could rebandage the wound. I wasn’t happy to hear that my head had to be partially shaved, because I had a formal dance coming in the next couple of days and I knew my hair wouldn’t grow back in time. But the nurse was so kind; she and I devised a plan to color the bandage in the same color as my hair, so I was less worried about my appearance.

I spent the next three hours talking on the phone with my grandma, who lives in Germany and is a Christian Science practitioner. She directed me toward a quote in Science and Health with Key to the Scriptures by Mary Baker Eddy. Although it’s in the chapter “Marriage,” I like how it talks about perseverance in a tough situation. “When the ocean is stirred by a storm, then the clouds lower, the wind shrieks through the tightened shrouds, and the waves lift themselves into mountains. We ask the helmsman: ‘Do you know your course? Can you steer safely amid the storm?’ He answers bravely, but even the dauntless seaman is not sure of his safety; nautical science is not equal to the Science of Mind. Yet, acting up to his highest understanding, firm at the post of duty, the mariner works on and awaits the issue. Thus should we deport ourselves on the seething ocean of sorrow. Hoping and working, one should stick to the wreck, until an irresistible propulsion precipitates his doom or sunshine gladdens the troubled sea” (p. 67).

So I pictured myself in the middle of a storm. But I knew the ocean, and I could ride its tough waves. I could conquer waves of fear and pain with a calm understanding of God’s powerful love for me. I was an experienced sailor (or “pray-er”), and I could ride over those influences, those suggestions that I had been hurt and it would take a while for me to recover. I was capable of doing this with ease. And when I saw the break in the clouds, the calm sea ahead, I did not look back.

After praying this way for a few hours, I noticed that my head wasn’t hurting. I was spending so much time thinking about spiritual ideas that I hadn’t even thought about what had happened at the museum. I was perfectly calm and knew that I had been healed.

The wound closed up within a few days. I had a couple of follow-up visits with the Christian Science nursing staff on campus, who encouraged me not to look back and doubt that the healing had taken place. I am very grateful for this milestone in my life.

I have proof now that a trusting faith in God’s power and an understanding of myself as spiritual—uninjured, unfazed, and whole—brings healing quickly and permanently.

Niklas Hathaway is a senior in high school. 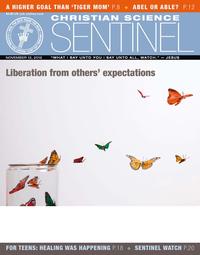