I originally shared this as a speech for a formal dinner at Principia Upper School in St. Louis, Missouri. The evening honors the senior high-school girls and gives them the opportunity to share gratitude for their experience before they graduate. A month or so before the dinner, the girls in our high school vote for four senior girls whom they admire or feel would have an inspiring message to share at this dinner. I was honored to be one of those four seniors chosen to speak.

The opportunity to make comparisons arises every day. On the surface, comparisons may seem harmless, but when it comes to comparing ourselves, our work, or our achievements with those of others, we start treading on dangerous ground.

At the start of her article titled "Vainglory," Mary Baker Eddy quoted William Shakespeare: "Comparisons are odorous" (Miscellaneous Writings 1883-1896, p. 267). I have thought time and again about why such a wise and careful observer of human nature as Shakespeare would make this statement with such certainty, and why Mary Baker Eddy would include it in her writings.

During the first week of my junior year in high school, I learned what Mr. Shakespeare meant when he said that comparisons stink. That week was a challenge, to say the least. I had taken on a difficult courseload and was feeling uncertain of my ability to handle the work. I came home after cross-country practice on the second or third day of school, and I lost it. I remember sitting on my parents' bed, crying. I was convinced that everyone in my classes was so much smarter than I was, that the other students had original thoughts to share, that I had nothing of value to say, and that I didn't deserve to be in a class with such bright, intelligent students. I was having a drama overload.

I had fallen into that smelly trap of comparisons. By seeing everyone else in my classes as more capable than I was, I failed to recognize myself as a whole and complete child of God who was prepared to take on any challenge set before her. I was not any more or any less of an expression of Spirit than my peers were, but I still made those comparisons.

During cross-country competitions, I stood at the starting line looking over at the girls wearing red and white, or green and black, or whatever other intimidating color combination, and immediately began to think, "They are so much faster than I am. What's the point in even trying?"

I quickly realized that with that attitude, I might as well take a seat on the sidelines and let the race start without me. I learned to discipline my thought to focus on what I could give to the race, and to recognize that my job was to stand tall for who I was as an expression of God. By doing that, I learned I could accomplish just as much as the girl who came in first.

And I began to realize why comparisons are so ugly. They prevent us from seeing the good expressed in ourselves and in each other with the purity that we should. If I compare myself with others in class, in a race, or as I walk down the hall, how can I let my light shine? How can I allow God's qualities to be expressed fully through me if I am unwilling to recognize where those unlimited qualities are coming from?

This Bible verse says it all for me: "Let your light so shine before men, that they may see your good works, and glorify your Father which is in heaven" (Matt. 5:16). This doesn't say to make your light shine, or to demand that your light shine, or to wait until someone else's light is dim enough that your light looks brighter than his or hers, and then let it shine. Let is such an important verb in this sentence. Letting something happen, as opposed to making something happen, is the difference between allowing God's will, or allowing human will, to determine our actions. A flower doesn't have to work at being beautiful; it just lets beauty express itself through every petal.

I began to discover that letting my light shine was the most humble thing I could do. One definition of humility is "submission to the divine will." When I think of someone being submissive, I think of weakness or uncertainty. However, being submissive to the divine will is really no different from letting your light shine—which is one of the most powerful and authoritative decisions you can make.

As hard as it was to learn the pitfalls of making comparisons, my junior year in high school was a successful one. Once I began valuing my own expression of God, not only did I excel in my coursework, but my artwork was also recognized in a number of competitions, and I was able to make meaningful contributions to my cross-country and track teams.

By making human comparisons, I was just getting in my own way. In fact, I think most of life's shadows are caused by standing in the way of our own sunlight. Being humble—submitting our will to God's will—is the only way to allow that sunlight to flood our experience.

So set your candle high, and let it burn brightly. And recognize that by expressing grace, honesty, strength, purity, you are giving others the authority to do the same. css

Caitlin is spending her summer as a camp counselor at Adventure Unlimited Ranches in Colorado. In the fall, she will be attending the Rhode Island School of Design and is interested in becoming an illustrator. 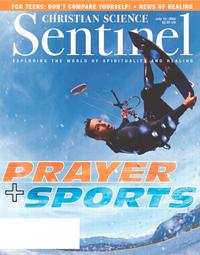