There was a time when I searched for a peace that would help me appear calm and serene at all times, even if inside I felt anxious, depressed, or exhausted. I would watch the swans in a park nearby and long for their pure serenity.

One particular day, I remember realizing how, despite their calm serenity on the surface, the swans were sometimes paddling furiously underneath. I saw how I had been trying to maintain a picture-perfect image of myself on the outside, yet feeling inside as if I were paddling furiously to keep it up and at any moment it would crash around me.

Sometime later, someone told me a story. There had been a children's drawing contest in which the goal was to draw "peace." The winning picture was of a gigantic, roaring waterfall bubbling and churning at the bottom. Yet directly behind the rushing water on a tiny ledge sat a canary—singing. I thought about why this represented peace so strongly that the judges had chosen it as the winner. Perhaps it meant that peace was not about appearing to have everything under control on the outside, when inside it felt as if things were falling apart, but that peace was actually about being able to sing despite what's happening around us.

More recently, I studied peace building as a graduate student, and thought further about these ideas. The first scenario presumed that the appearance of an absence of conflict would signal peace. The latter, however, claimed the hope of peace even in the midst of conflict. I grew to believe that when people measure peace by more than just the absence of conflict, they will see how to live with joy despite harrowing or disturbing circumstances. Perhaps, then, the work of finding peace in our lives or the world is really about living the qualities of peace, which include joy, self-assurance, forgiveness, love, compassion—right where discouragement, anger, disrespect, misunderstanding, and hatred disrupt our equilibrium.

Jesus told a parable that illustrates the importance of practicing peace. A man is plagued by an evil spirit, or a mental disturbance. This evil spirit leaves the man and then, after roaming the world for a while, it returns to find the man's "house" (his consciousness, perhaps) swept clean and empty. The evil spirit then moves back in—along with quite a few other dispiriting thoughts—and makes the man's mind more disturbed than it had been previously (see Matt., chap. 12).

This story reminds me to stay mentally alert so I can welcome in from God ideas of goodness, satisfaction, gratitude, and love. It points to the fact having true peace is not just about getting rid of conflict, but includes noticing all that is worth appreciating and celebrating in life. This happens when we discover a higher, spiritual peace right in the midst of conflict and discord, like a flower growing out of a crack in a concrete lot.

My fellow graduate students often organized prayer watches where people around the world would pray for an hour a day, thereby covering almost every time zone. As the conflict in the Middle East escalated, we would have prayer watches weekly. On one of these occasions, I asked God how I could know that these efforts to pray for peace actually had an impact on such a large-scale, global conflict. Although the answer didn't come immediately, I trusted that somehow, some way, there must be tangible effects from our consecrated, collective prayer.

I believed that the same spirit of Christ, which I felt in the form of inspiration, love for others, joy at watching a sunset, or forgiveness when someone acted badly, was within each individual in Israel and in the Palestinian territories. I prayed that no violence, conflict, hatred—no urge to suicide bombings or to devastating tank and bulldozer attacks—could disrupt the deep reserves of peace that God had put within each heart. Even if these wells of life seemed obscured by decades of ongoing conflict, the love of harmony within each heart was stronger than any invading discord.

The roots of terrorism lie in misunderstanding, fear, hatred, and distrust. These thoughts cannot be rooted out by bombs or military action. Only as threats such as these are consistently opposed with compassion and understanding; only as people foster deep and careful listening to their hearts and the hearts of others—even to those they consider to be enemies—will they begin to hear the voice of God, of Love.

Shortly after I had been praying this way, I received an e-mail. The young Jewish woman who sent it had participated in an eight-day walk from Tel Aviv-Yafo to Jerusalem. The event was designed to give Palestinians and Israelis an opportunity to walk together in peace. As the writer approached the walk's staging area, she found herself in the middle of an angry confrontation between an elderly religious Jew and an elderly Arab man.

I believe that every prayer we offer for peace helps chip away at conflict and terror.

Although police were trying to calm the two men, they remained agitated and shouted insults at each other. The young woman said she quietly approached the Arab man, spoke calmly to him, and asked him to sit down and not react to the provocation. Just then, a bus arrived and the Jewish man departed—leaving the scene calmer, although only for a moment.

Then a Jewish woman, who had been standing close by during the argument, approached the Arab, who reacted immediately. By now, the police had left, and this young woman was alone in trying to calm the situation.

As more people became involved, accusations flew from both sides concerning who was at fault for the death and suffering. Despite the barrage of hatred that was now involving her directly, this young woman did not argue or react to the harsh words being thrown her way. Instead, she said she felt a deep sense of compassion and an intense need to listen patiently. She saw that behind this show of hatred were the suffering and pain caused by years of constant conflict.

Seeing conflict with others as an opportunity to practice being peaceful and calm despite the fury, and not as an issue of who's right or wrong, promotes the dissipation of agitation. There's nothing to feed the fire. This was the result that day.

The young Jewish marcher spoke very softly, particularly to one of her Palestinian accusers, letting her know that she was listening. As she continued to explain about how she cared for and loved this woman, despite their differences, the woman, who had been very hateful toward her, calmed down. She suddenly kissed the marcher on her cheek, and briefly joined the walk. In just a few moments, at least for that day, a heart was transformed.

For me, the outcome of this situation was more than a moment of reconciliation between two peoples at war. I believe that every prayer we offer for peace helps chip away at conflict and terror.

At a time when war seems to be the answer of choice for deep-seated conflicts, my prayer for humanity is that we spread our hearts' desires for transformation and peace, reconciliation and forgiveness, gentleness and love, to friends and foes alike. We may not readily see the effects of our prayers. But the effects of every good thought and deed ripple outward and will add to the momentum for peace.

Lari Snorek-Yates is completing her Master's Degree at the School for International Training in Vermont, focusing on peace and conflict resolution. She can be reached at larijs@earthlink.net. 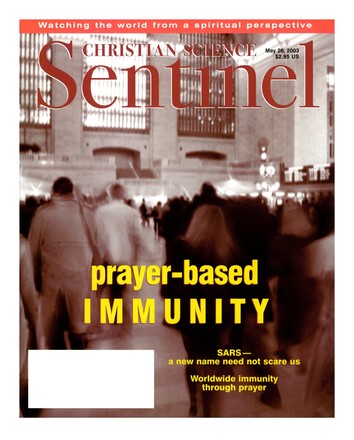 with contributions from Ann Winterholter, Richard Dymond, Tim Rutten | May 2003

SARS a new name need not scare us

My effort for PEACE in the Middle East

I learned to listen to God

Making time for what you love

By Marilyn Jones Senior Writer | May 2003

By Mónica Esefer Passaglia | May 2003

Tell us about your healing

Contagion and the mental economy