As many around the world grieve for loved ones lost during the pandemic, many more yearn to comfort their neighbors and find a way to ease the pain. Where can we look for help?

Research by a growing number of scientists offers a window on some answers. In the last few decades, these individuals have been documenting a more expansive sense of life—that life continues after what appears to be physical death. Dr. Pim van Lommel, a Dutch cardiologist, has chronicled a number of experiences related by people who had been declared dead, with no measurable brain activity. After being resuscitated, these individuals told of consciousness that continued after all physical signs of life had ceased (see Pim van Lommel, M.D., Consciousness Beyond Life: The Science of the Near-Death Experience).

This scientific research supports a significant point made by the Discoverer of Christian Science, Mary Baker Eddy: that life is a continuous, eternal fact for all of us. When we understand this, we not only find comfort, but can also begin to experience a fuller, more uninterrupted sense of life.

There have been two times in my life when I thought I was going to die before morning—one was due to a severe accident, the other to a serious illness. Not only did I survive the night, but in both cases I was significantly better by morning and was soon completely healed.

What happened? Over the years, an awareness that life is neither confined to mortality nor a fragile thread easily broken had been growing as I studied the Bible along with Science and Health with Key to the Scriptures by Mary Baker Eddy. This conviction was in place when I needed it most. A tangible sense of the divine nature of eternal life lifted me out of the darkness of impending death.

In the Bible, Jesus Christ promises, “Anyone who hears my word and believes him who sent me has eternal life” (John 5:24, New Revised Standard Version). The life Jesus spoke of and demonstrated throughout his ministry is something so immense that it’s possible to recognize it as infinite and eternal. And a variety of accounts in the Bible hint at this life that extends beyond the grave. There are records of Enoch and Elijah, two Old Testament figures, who appeared to ascend without a death process. During Jesus’ ministry, Moses and Elijah (who had been gone for centuries) appeared in recognizable form to Jesus and three of his disciples during what is known as the transfiguration. And following his crucifixion, Jesus was present with his followers before his ascension.

Science and Health explores the essence of real, spiritual existence. It identifies God as Life—as immortal, boundless being—and each of us as God’s creation, inherently including all the characteristics of Life. “Like father, like son,” as the saying goes.

Life is one—is spiritual, is in and of God here, now, and always.

This means our true identity is spiritual. This identity is beyond anything mortal—as is our life. And this life isn’t separated into two halves—one here and one beyond the grave—but is one, is spiritual, is in and of God here, now, and always. Grasping this fact lifts our thought into a recognition of the infinite, as it did for me when I was facing the possibility of death.

Eddy explains this in Science and Health where she writes: “One moment of divine consciousness, or the spiritual understanding of Life and Love, is a foretaste of eternity. This exalted view, obtained and retained when the Science of being is understood, would bridge over with life discerned spiritually the interval of death, and man would be in the full consciousness of his immortality and eternal harmony, where sin, sickness, and death are unknown” (p. 598).

What a promise this is! No matter how dire the circumstances we might be facing, the present and forever reality is eternal life. Life that is defined by God, who is infinite Life itself. When prayer helps us accept this fact, we can see beyond the limited view of life as beginning at birth and ending with death. Knowing this also takes us beyond grief, to gratitude for the ongoing spiritual life of family members or friends who have passed away, as this week’s article by Anna-Zoë Herr so inspiringly illustrates.

This line from one of Eddy’s poems sums it up perfectly: “O Life divine, that owns each waiting hour” (Poems, p. 4). Wherever we are in our journey, we can trust this understanding of divine Life to lift us into an exquisite sense of ongoing being. 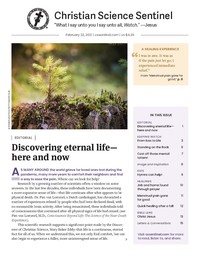