“Honesty is spiritual power. Dishonesty is human weakness …,” writes the Discoverer and Founder of Christian Science, Mary Baker Eddy (Science and Health with Key to the Scriptures, p. 453).

A simple example from my youth may help illustrate this larger truth: After I switched schools, my new math teacher wanted to know if I knew multiplication and division. Out of fear, embarrassment, or perhaps pride, I lied and said, “Yes.” Maybe I thought I would gain something by saying what others wanted to hear—but the effect was quite the opposite. For obvious reasons my math grades fell, but in other ways, so did my confidence and outlook on life. Rather than admit to my mistake, I struggled for years in the wrong math class.

One year, I finally set aside my pride to take an honest look at myself. I knew I couldn’t continue the way I had, so I confessed to my new teacher at the beginning of the year that I needed to be in a lower math class. It was frightening at first. I thought I might lose my friends in the class or that my transcript would look less impressive to colleges without that Advanced Placement course—but admitting my fault actually felt freeing. As quickly as the lie was corrected, I was able to produce good work, contribute in class, even help other classmates who struggled with concepts. Starting honestly allowed me to progress and succeed as a result. I kept my friends, and I graduated as one of the top in my class.

In its profoundest sense, honesty proceeds from Truth, another name for God, which the Bible describes as having all power (see Deuteronomy 32:4). In starting with Truth, no one demonstrated the power of God better than Christ Jesus, who healed sinners and even reformed corrupt officials, as was the case with Zacchæus (see Luke 19:2–10). Jesus’ healing work showed that each and every one of us has the innate ability to overcome wrongdoing, because we all, in truth, come from God.

We each have the strength to look at ourselves honestly and build on Truth’s foundation, instead of on the fears, greed, or pride of human weakness. Even in the smallest of affairs, the power and effect of honesty are felt.

Adapted from an article published in The Christian Science Monitor, March 8, 2016. 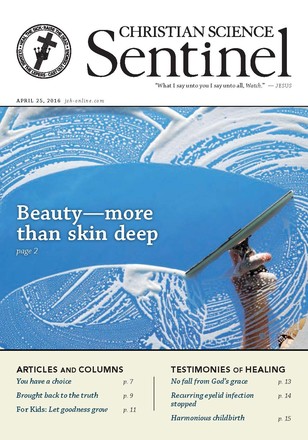 Don’t fix it—nix it! And replace it!

You have a choice

Brought back to the truth

No fall from God’s grace

The year of living more honestly

By The Monitor’s Editorial Board | April 2016