The truth about fear

Most people would say they have been afraid more times than they can count. But since early last year, for many (estimated at nearly forty million adults in the United States), occasional fears have melded into continual anxiety. And though no one wants to be afraid, common theories hold that fear is an inexorable part of life.

Franklin Roosevelt, President during much of the Great Depression and most of World War II, rallied Americans at the peak of the Depression when he famously said, “The only thing we have to fear is fear itself.” Christ Jesus, centuries earlier, went much further, showing women and men that they did not have to bow down to fear in any form, for any reason.

“It’s all right,” “Don’t be afraid,” “Don’t worry about things” (Mark 6:50, Matthew 6:25, The Living Bible), he told those who seemed in the grip of terror—for instance, a dad whose only child was dying, a man paralyzed for years, his own disciples on a ship in a violent storm, or a multitude of food-insecure poor people. Those diseases and discords were completely relieved, replaced by health, peace, security, provision. Was the Master just good at calming people, making them see that things really weren’t as bad as they thought? Or was there something else at work?

Jesus said it was his Father, God, who was at work. “My Father constantly does good, and I’m following his example” (John 5:17, TLB). He knew God’s children to be spiritual, good, and immortal just like the perfect Love, God, they were created to reflect (see Genesis 1:26, 27).

In her classic textbook on God and spiritually scientific healing, Science and Health with Key to the Scriptures, Mary Baker Eddy writes: “Inasmuch as God is good and the fount of all being, He does not produce moral or physical deformity; therefore such deformity is not real, but is illusion, the mirage of error. Divine Science reveals these grand facts. On their basis Jesus demonstrated Life, never fearing nor obeying error in any form” (pp. 243–244).

We can always see fear for the baseless fallacy that it is: the erroneous belief of God’s absence.

The grand fact of the unreality of evil in light of the all-power and all-presence of infinite Life and Love brings to hand another inevitability—the nothingness of fear itself—and renders a Christly basis for Roosevelt’s rallying cry in the simple truth that we actually have nothing to fear.

We will invariably face challenges in life, at times even apparently fearsome ones, but Jesus promised that the Christ, the healing understanding of God, would always be with every one of his followers. “Peace I leave with you, my peace I give unto you,” he said. “Let not your heart be troubled, neither let it be afraid” (John 14:27). Knowing that heaven-born peace is permanently ours as God’s reflection, we can always refuse entrance to fear—for us, for humanity—seeing it for the baseless fallacy that it is: the erroneous belief of God’s absence. When fear seems to be present and wielding power over us, perhaps caused by another’s thoughts or actions, we can turn to God. And, finding our heart’s home, we see distress exit, cast out by the perfect Love that was actually filling that space all along (see I John 4:18).

We also find self-centeredness fading out, along with other limitations that inevitably accompany unrest, eclipsed by our divinely natural unselfed affection and charity—and we find that these lived qualities not only mitigate the concerns and trepidations of others but also bring us sweet release and fearless joy. Mrs. Eddy explains in an address published in her Miscellaneous Writings 1883–1896: “We have nothing to fear when Love is at the helm of thought, but everything to enjoy on earth and in heaven” (p. 113).

How well this describes contributor Michael Mooslin’s experience helping a drug addict, as related in this week’s Sentinel, and something Alexis Deacon realized when she suffered a burn on her face. “This perfect love of God wiped out all my fear,” she writes. “I was left with peace and a childlike expectancy of a quick healing.” It also describes the selfless love expressed by the prayer team of practitioner, parents, and siblings in Patrick McCreary’s speedy healing following a fall from a bicycle.

God never works through fear or sends it. In light of the allness of God, who is infinite good, fear is always a lie, because Love is always Truth. So we can’t help recognizing, as Ginger Emden puts it in her article, that “just as toast can’t be untoasted, we as God’s loved creation can’t be undone.” 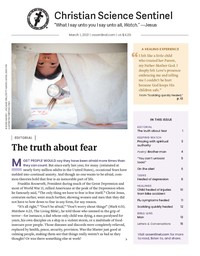