Thanks living and praise giving

When you ask an iPhone, “What’s the meaning of life?” you might get the response, “All evidence to date suggests it’s chocolate.” That’s just one of several retorts offered up by Siri, Apple’s clever “personal assistant” application with a pleasant, but go-about-your-business expression. Its other quips about life’s meaning include: “I don’t know. But I think there’s an app for that.” “Life: a principle or force that is considered to underlie the distinctive quality of animate being. I guess that includes me.”

Perhaps the age-old conundrum about the meaning of life is best left to our own prayers and experience and not to artificial intelligence. While no single answer completely satisfies our curiosity about life’s significance, that shouldn’t stop us from considering its intent from our own perspective. Maybe a better way to frame the quandary is by evaluating our individual life purpose. Got a goal?

Is there a point to your life, an underlying theme that defines you? Here’s a suggestion: Praising God. That might sound passé, even naive in today’s world. Yet, that very desire somehow fulfills something deep within. You can say it satisfies the soul, makes you feel connected to something bigger than you are.

Feeling cherished and in sync with life stems from our praise activity. God-praising is acting on the impulse of inspired appreciation. Have you ever been moved by a stirring music or theater performance, or by the skill and perseverance shown in a sporting event? You need to get to your feet and applaud!

What does praising God look and sound like? A round of applause might be just the thing when taking in the beauty of God’s handiwork or appreciating an achievement accomplished at divine Mind’s direction. But it’s hard to go around clapping your hands all day. Christian Science discoverer, Mary Baker Eddy, brings up this very point concerning the approach to praise: “It has long been a question of earnest import, How shall mankind worship the most adorable, but most unadored,—and where shall begin that praise that shall never end?” (Miscellaneous Writings 1883–1896, p. 106).

Praise is inspired, not formulaic. And while worship can be collective as well as individual, praise, by its very nature, is deep-felt selflessness. Mrs. Eddy sends us off in a good direction when we’re thinking about the activity of praise, as she continues: “Beneath, above, beyond, methinks I hear the soft, sweet sigh of angels answering, ‘So live, that your lives attest your sincerity and resound His praise.’ ”

As with other Christians, my inspiration starts from one of the most revered praise books of all time, the Bible. Full of valuable experiences from divinely inspired men, women, and children, the Bible provides fresh insight into praise-giving and the resulting impact on individual lives. Take, for example, the story of Jehoshaphat in Second Chronicles 20. He was the King of Judah who, when up against some formidable enemies, sent a platoon of praisers instead of his regular army to meet the foe. The result must have been heartwarming; the enemy destroyed itself. And as the praise continued, so did the reign of peace in Judah.

Then there is Jonah, the unfortunate fellow who got eaten by a fish (see Jonah 1). It was only after he began a prayer of thanksgiving that he was freed from his challenging predicament. In Jonah’s case, when his praising ceased, his discontent returned, evidenced by anger.

And don’t forget Paul and Silas in Acts 16. While on a journey of healing and preaching, they found themselves in a heavily guarded jail with their feet bound. Upon their singing praises to God, an earthquake occurred and both found freedom. Their independence allowed them immediately to get back to their mission of salvation for all who would hear them.

God-praising is acting on the impulse of inspired appreciation.

In studying these and other Bible accounts, I’ve found it helpful to focus on three elements in my praise-giving. The first is praising God in love. Deep-felt love for God and man is the foundation of all praise effort. And that love must be intense. Siri, that phone sage, gets it partially right when taking another stab at the meaning of life: “Try to be nice to people. … and try to live together in peace and harmony with people of all creeds and nations.” But, as I see it, just being “nice to people” is flying too low. We gain the altitude of praise only as we truly love, motivated by no concern for oneself in helping to lift the burdens of others.

Jesus provides the paramount example. His life was the fulfillment of his love. His advice to his followers spoke to his radical stance on love: “Love ye your enemies, and do good, and lend, hoping for nothing again; and your reward shall be great, and ye shall be the children of the Highest” (Luke 6:35). Love should be the response to any circumstance. Instead of running for cover to protect themselves when the earthquake hit, Paul and Silas stopped to help a prison guard who meant to harm himself because of his shame when his prisoners started escaping. Paul and Silas weren’t just nice; they loved generously.

The second element in praise-giving is gratitude. Giving thanks ignited Jesus’ healing work. Just before Lazarus was raised from the dead, Jesus lifted up his eyes and prayed, “Father, I thank thee that thou hast heard me.” He also said, “I knew that thou hearest me always: but because of the people which stand by I said it, that they may believe that thou hast sent me” (John 11:41, 42). It’s not God that needs our gratitude; we do. Thanksgiving is our acknowledgment of what God has done, is doing, or will be doing in our lives. And the book of Psalms in the Old Testament of the Bible (especially the last five psalms) provides all any of us could want to know about gratitude and praise. Those psalms can lift you up when nothing else can.

The third element is praising God in humility: “And whosoever shall exalt himself shall be abased; and he that shall humble himself shall be exalted” (Matthew 23:12). Humility puts everything in its right sequence. Too often vainglory disrupts our experiencing the natural rhythm of God’s governance. It’s as if we think we are the CEO of the universe. Pressure, stress, and all sorts of complications arise when we act as the one in charge—actually making us feel less significant. Meekness resets the order of things. Humility is the recognition that God is head above all and worthy to be praised.

Praise giving is really thanks living. It’s the thought, motive, and action leading to good. Mrs. Eddy put it this way: “If we feel the aspiration, humility, gratitude, and love which our words express,—this God accepts; …” (Science and Health with Key to the Scriptures, p. 8). My young grandson has described it as “doing good stuff.” And in my chats with him, I emphasize that God is the doer. And we’re a vital part of that activity. We are what God is doing, what Love is performing. Our parts are like notes in music. Each one of us is an important note, neither less nor more than anybody else’s. And together we make a symphony.

That’s what praising God sounds like; a masterpiece of love, gratitude, and humility. Join in. The harmonies are sweeter than chocolate! 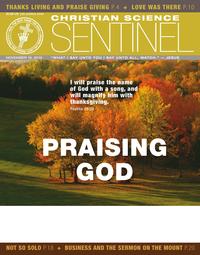