The commandment which Jesus called the second, and which he said was like unto the first, may be said largely to form the basis of the Golden Rule. "Thou shalt love thy neighbour as thyself," if not the same in words, is certainly the same in meaning as the rule of conduct, taken from the Sermon on the Mount, which now popularly reads, "Do unto others as you would have them do unto you." All the world has, in one way or another, admitted the rightness of the simple statements just quoted; and the reason is not difficult to find; for its scientific appeal is the appeal of divine Principle, Love and Truth, which finds its own response in every heart seeking God, good. Christian Science is strictly in accord with the commandment, "Thou shalt love thy neighbour as thyself."

In the eleventh chapter of John is recorded one of the principal events in the life of Christ Jesus. The story of the awakening of Lazarus from the dead is supremely interesting even when considered merely from the viewpoint of a gospel narrative. But there is much more to this story than appears on the surface; it is replete with lessons for our daily thought and conduct,—even the practical application of the Golden Rule. There is, for instance, the taking away of the stone from the mouth of the cave. In his boyhood the writer often wondered why Jesus, with his mighty understanding, did not with one word remove the stone. The lesson, however, is obvious. Jesus never did for others what they could and ought to do for themselves. To the young man seeking vain excuses he said, "Let the dead bury their dead." So, likewise, let those that had placed the stone over Lazarus take it away. Here Christ Jesus plainly pointed to a duty that should not be overlooked.

But the loving lesson that appeals to us all, and one which we should daily put into practice, is found in the words of Jesus when, after he had awakened Lazarus and Lazarus stood before the company, "bound hand and foot with graveclothes," Jesus gave the command, "Loose him, and let him go." To the Christian Scientist these words are full of meaning. Is it not easy to see that the things which seemed to bind Lazarus and put him into a grave were the false opinions and beliefs his friends held, in which he acquiesced? Were not the graveclothes that bound him hand and foot but symbols of human beliefs, to which spiritual ignorance clings so tenaciously? When Lazarus became sick and died, human opinion may have even congratulated itself, and said, "I told you so;" for human opinion loves to predict evil and then be self-satisfied in the fulfillment of its own prediction, as though this proved its wisdom. The command, therefore, "Loose him, and let him go," means much—even full obedience to the words, "Thou shalt love thy neighbour as thyself." No obedience less than a surrender of mortal beliefs for the sake of gaining an understanding of man as revealed in divine Science, can possibly fulfill these words.

The true understanding, therefore, of the Golden Rule, as it dawns more clearly on our sight in Christian Science, will make us work constantly to know the truth about the graveclothes of false belief wound round and round about many a Lazarus. Thus we shall prove what Mrs. Eddy means when she says, in "Miscellaneous Writings" (p. 370), "The antagonistic spirit of evil is still abroad; but the greater spirit of Christ is also abroad,—risen from the grave-clothes of tradition and the cave of ignorance."

This much we can do now: we can at least refuse, whenever an opportunity seems to present itself, to be one of those ready to bind Lazarus with false beliefs, the graveclothes of tradition. Without Christian Science this would be well-nigh impossible; but with even a slight understanding of Science, it becomes a joy to see only the image and likeness of God, though mortal thought may claim the presence of sin, disease, and death. Thus, through loving our neighbor as ourselves, we shall cleanse our own thought from all impurity,—from all fear of sin, disease, and death, and free ourselves even from the graveclothes of matter. In "Science and Health with Key to the Scriptures" (p. 267) Mrs. Eddy says: "The robes of Spirit are 'white and glistering,' like the raiment of Christ. Even in this world, therefore, 'let thy garments be always white.'" 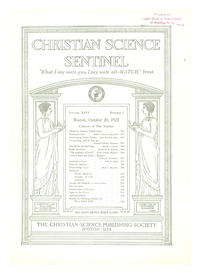