As I ponder a divided political landscape, I often think about an experience that taught me about true leadership and how it can heal division wherever it appears in our lives. Seeing how prayer brought resolution to a contentious jury deliberation strengthened my conviction that turning to God to heal seemingly intractable conflicts is both practical and applicable to any situation, large or small.

About ten years ago I was on a jury for a felony DUI (driving under the influence of alcohol) case. We sat through a week of testimony from the defendant and his girlfriend as well as numerous police officers and expert witnesses. Then we went to the jury room to decide the case.

After I was elected foreperson of the jury, the very next thing we did was poll the members to see where everyone stood. We were split almost down the middle for and against conviction. We decided to go around the room to share and explain our personal opinions. I thought it would be helpful for me to be both firm and clear about my opinion, so I strongly stated what I felt should be the outcome of the case.

In retrospect, I realize that this was the result of a mistaken notion about leadership, because the moment I staked out my position I could sense the other jury members hardening in their opinions. Indeed, as we continued around the room, individual members began to get quite loud and insistent regarding their points of view. The day wore on, and tensions rose high as emotions and opinions clashed. At one point, a man even picked up his chair and pounded the ground with it repeatedly, threatening to throw it across the room. I went home that night very discouraged, and I endeavored to listen for God’s guidance.

The moment I staked out my position I could sense the other jury members hardening in their opinions.

The understanding that Christian Science has given me of the nature of God was extremely helpful in this situation. In the Christian Science textbook, Science and Health with Key to the Scriptures, Mary Baker Eddy enlarges the reader’s sense of Deity by introducing seven synonyms for God, one of which is Mind. She explains that the attributes of Mind include wisdom, discernment, and intelligence, and that because God created man in His image and likeness, we all reflect the infinite qualities of Mind. I prayed by knowing that I and everyone else on the jury reflected these God-given qualities, and that Mind, and only Mind, was guiding our thinking and reasoning.

Christ Jesus’ life and works show that, in fact, the divine Mind is the only real Mind, and that the human mind must yield to this fact. Two of Jesus’ well-known statements recorded in the Bible make it clear that we can never be separate from God. He said, “I and my Father are one,” and, “I can of mine own self do nothing: as I hear, I judge: and my judgment is just; because I seek not mine own will, but the will of the Father which hath sent me” (John 10:30 and 5:30).

I thought about Mrs. Eddy’s own experience endeavoring to follow in Jesus’ footsteps. Once, when facing a difficult legal challenge, she turned to God as she always did, trusting that divine Mind would produce a just outcome. She wrote to one of her students: “There is but one God, one infinite Mind, there is no law but the divine and this law reigns and rules this hour. Let us know this and rejoice—know that the judge of the whole earth will do right” (Irving C. Tomlinson, Twelve Years with Mary Baker Eddy, p. 210). A student of the Bible, she undoubtedly found comfort and reassurance in the Bible passage, “Shall not the Judge of all the earth do right?” (Genesis 18:25).

That night I prayed for the humility to make no further attempts to sway an individual juror’s thoughts or opinions, but to trust that God would move the entire jury in the right direction according to His wisdom. I took to heart this instruction from Science and Health: “In a world of sin and sensuality hastening to a greater development of power, it is wise earnestly to consider whether it is the human mind or the divine Mind which is influencing one” (pp. 82–83).

I prayed for the humility to make no further attempts to sway an individual juror’s thoughts or opinions.

I returned the next day and decided that we needed to “reset” the room. I told my fellow jury members that we should let the evidence speak to all of us rather than try to persuade one another to adopt our point of view. I could feel the tension in the room gradually lift, and we began to sift carefully through the testimony, asking the court reporter to read nearly the entire transcript back to us. Everyone began to listen carefully to what had actually been said. By the end of another week, we had replayed nearly the entire trial, and I could feel the room moving in an entirely new direction. We finally concluded with a unanimous decision—one with which we were all at peace.

The work of reviewing all the court testimony was not easy, but I felt divine Mind, the one Mind, leading all of us. As we listened with a more open thought, it became clear that the testimony had a certain logic to it that had not been evident before. In addition, I saw that as we rely on Mind, or divine Truth, to guide us, this enables our sense of human justice to more closely “pattern the divine” (Science and Health, p. 542). As we yield to this higher, divine direction, avenues for both mercy and justice appear. Both these qualities were present in the judge’s final remarks.

This experience opened my thought to an important lesson about the meaning of true leadership: It isn’t a matter of forcing one’s own ideas on another, but rather of having the humility to be a transparency for God’s purpose in a given situation. A desire to do God’s will, whatever that may be, opens the way for outcomes that bless all involved and lead to truly just and merciful results. That’s true leadership. 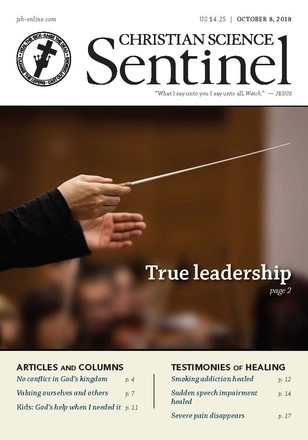 No conflict in God’s kingdom

Our every need supplied by God

Valuing ourselves and others

God’s help when I needed it

Healing of injury from a fall