A Practitioner of Christian Science was called to the home of one in distress. The sufferer was a Reader in a branch Church of Christ, Scientist. She was convinced that because of this she was a target for mortal mind's hatred of Truth. The practitioner seemed unable to persuade the patient otherwise. Finally the practitioner said: "Well, if you will be a target, be one. But, for goodness' sake, be a target out of range."

A target out of range! What vistas this opens. To be out of range is to be out of reach, beyond the limited shafts of the aggressor. The bird has but to spread its wings and mount to azure heights to be beyond the range of the sharpshooter.

Can we be as fetterless and free as the bird? Of course we can. The beloved Discoverer and Founder of Christian Science, Mary Baker Eddy, pointing to man's inherent freedom, writes in "Science and Health with Key to the Scriptures" (p. 223), "Sooner or later we shall learn that the fetters of man's finite capacity are forged by the illusion that he lives in body instead of in Soul, in matter instead of in Spirit." Fetters forged by illusion are illusions, not realities.

Christ Jesus found his safety in claiming the spirituality of his being. It is recorded in the Gospel of Luke that on one occasion as he taught in the synagogue his hearers were filled with wrath. They rose up and cast him out and led him to the brow of a hill, intending to throw him down headlong. But he passed through the midst of them and went his way, undisturbed in his healing ministry. They did not even see him. He prophesied that those who believed on him would do the works that he did, and even greater works, "because I go unto my Father" (John 14:12). Mrs. Eddy says (Miscellaneous Writings, pp. 195, 196), "The 'I' will go to the Father when meekness, purity, and love, informed by divine Science, the Comforter, lead to the one God: then the ego is found not in matter but in Mind, for there is but one God, one Mind; and man will then claim no mind apart from God."

So long as we identify ourselves as finite persons appointed by other persons to hold certain offices or perform certain tasks in our movement, just so long do we lay ourselves open to being targets, supposititious victims of hatred, envy, deception, and hypnotic control. Opposition and criticism, discouragement and inefficiency, often follow in the train of these errors. But mortal mind never reaches beyond itself. It sees itself, its own mistaken concept of itself, condemns itself, destroys itself. Neither God nor the real man is ever within range of materialism.

Aggressive mental suggestion may whisper: "You are a mortal. I, evil, can make you afraid, make you sick, wear you out, exhaust you. I can besmirch your character, belie your integrity, and cause others to believe and circulate these lies. In spite of your best efforts, I can make you feel incompetent, mistrusted, unloved, unhappy." Or the aggressive suggestion may raise its voice in self-justification and under the guise of our own thought argue: "I am important. I demand to be recognized. I want my own way and intend to do my own will." But neither self-depreciation nor self-glorification is real, and the alert Christian Scientist does not lend himself as the tool of either one. He does not let error use him to bring dissension, division, or disloyalty into our movement. He does not allow himself to be handled by lack of wisdom, self-seeking pride, or a false sense of martyrdom. His surety is in God, and his joy no man takes from him.

When we stop to think about it, where are we more safe, more loved, more cherished, than in the service of our Maker? Where may we more sensibly feel the self-renewal of Life, the strength of Truth, the nourishment of Love? Let "meekness, purity, and love, informed by divine Science" cleanse us of the egotistical belief of being a mortal and lift thought above matter to Spirit. Then in true humility shall we acknowledge Mind as the Ego, the I of our being, and comprehend more deeply the Master's sayings: "He that cometh from above is above all" (John 3:31); "The Father himself, which hath sent me, hath borne witness of me" (John 5:37); "I and my Father are one" (John 10:30).

In the uncontaminated realm of Spirit and from the standpoint of God's allness, man's lifework unfolds as the subjective experience of divine Mind. Soul reveals its own grandeur and glory, Love its own peace and poise. In Science, man reflects God and is unconstrained, unhindered, unbounded. He is not localized and finitized; hence he cannot influence erroneously or be so influenced. Life expresses its own full, free course of resplendent Life, and man is its expression. Hence man rejoices in the limitless capacity of his God-derived being, exempt from accident, age, decay.

God never made a law of penalty nor made man capable of experiencing penalty. God's law is the law of freedom, the law of justice, the law of Love. Says Mrs. Eddy in Science and Health (pp. 513, 514). "So-called mortal mind — being non-existent and consequently not within the range of immortal existence — could not by simulating deific power invert the divine creation, and afterwards recreate persons or things upon its own plane, since nothing exists beyond the range of all-inclusive infinity, in which and of which God is the sole creator." And she adds, "Mind, joyous in strength, dwells in the realm of Mind."

In the realization of this fact we are indeed a target out of range — no target — for nothing exists but the forever all-inclusiveness of everlasting Love, and man abides in the consciousness of Love, as Mind's eternal expression of its own self-completeness and unbroken harmony.

Darkness never pierces light, but light extinguishes darkness. To light all is, without interruption, forever light. In "meekness, purity, and love, informed by divine Science," let us see that the "I" does go to the Father — is indeed forever one with the Father — and so let us know ourselves as the unassailable radiance of His presence.

This article is included in:
2007 - ANTHOLOGY

This article is included in:
1961 - PAMPHLET

This article is included in:
1955 - PAMPHLET

Target out of range 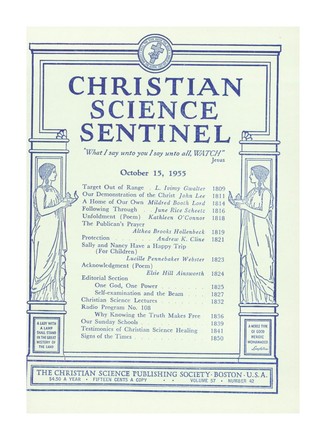 TARGET OUT OF RANGE

OUR DEMONSTRATION OF THE CHRIST

A HOME OF OUR OWN

SALLY AND NANCY HAVE A HAPPY TRIP

ONE GOD, ONE POWER

SELF-EXAMINATION AND THE BEAM

RADIO PROGRAM No. 108 - Why Knowing the Truth Makes Free

Loving the Pupil as Jesus Loved

One afternoon I began to manifest...

I have received so much joy and...

The many instances of practical...

Christian Science is the most...

I have a great desire to give...