At That Time all that spoke to me was jazz. I was three years out of college and desperately needed release from a drug habit. Listening for God's guidance one day, I realized that A Love Supreme—John Coltrane's jazz tribute to God—was flowing from my CD player. Suddenly I was filled with gratitude for God, and at peace.

In childhood I'd had healings through prayer of injured wrists, cuts, colds, homesickness, and, later in college, sprained ankles. But now after college, I struggled with the question "Is it God's power that heals?" I knew from experience that loving God brings spectacular results, but apparently I never grasped that God did the healing.

Condemning myself for being a weak Christian Scientist, I felt it would be OK if I drifted away a little. Six months later I was sure a recreational drug could make me more conscious of spiritual things than prayer. But this hypothesis quickly proved fallacious. I felt even more lost and confused.

For the next two years, I struggled to gain some kind of control over both my physical and mental struggles. I tried to improve my thought in small ways by studying the Christian Science Weekly Bible Lesson and taking time to say the Lord's Prayer. I also saw I had to be really honest with myself and deal with the drug problem, which I could see involved a love of materiality, as opposed to God. Yet I knew that I adored God! And I knew that to find lasting freedom and end the suffering, I had to turn wholeheartedly to God's healing power.

After I asked a Christian Science practitioner to start praying for me, I knew completely that it is God who heals. My freedom from drug addiction came within a week. What healed me was the realization that the habit was only an imposition on my love for God, good. I also realized that because Spirit and matter can never interact, the drug had never had any effect on my identity as God's image. I understood that mixing matter and Spirit is impossible, since matter has no basis in God. Also that God is the only existence, intelligence, or good that I could ever worship.

This healing brought me complete joy!

Songs of praise for God's omnipotent power filled my thinking. I wanted to share this feeling of freedom with others. I'd glimpsed what practicing Christian Science meant—for me it is a continual "YES!" to God's power and grace.

Even though I had a promising career in graphic design, I began to think about being in the public practice of Christian Science. For two years, I prayed deeply about my next steps. The question was always there, "When will I go public with my practice?"

Then a Christian Science practitioner invited me to share an office. Self-condemning thoughts tried to talk me out of it—after all, my life certainly wasn't perfect yet. But when I went to God in prayer, divine Science turned the argument around. It showed me that God's love is about making us glorify and worship God's perfect law of good.

The answer to my question was simple: "Walk over the wave of human notions and fears. Love and trust only My healing power." I did, and now advertise in The Christian Science Journal as a full-time healer.

FOR ME, PRACTICING CHRISTIAN SCIENCE IS A CONTINUAL "YES!" TO GOD'S POWER AND GRACE.

I found that the practice of Christian Science is indeed possible for anyone—even me! I used to think that a Christian Science healer had to be perfect before launching a public practice. But this statement from Science and Health says to me that we are always naturally learning more about God's power: "Christian Science presents unfoldment, not accreation; it manifests no material growth from molecule to mind, but an impartation of the divine Mind to man and the universe" (p.68). Now I see that this is spiritual learning, an eternal form of progress. And I love knowing that I can always play the tune of Spirit, as I learn about the goodness of God's wonderful creation. 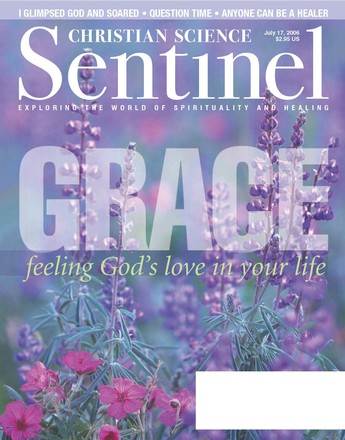 THE HEALING POWER OF GRACE

THE SURPRISING GIFT OF GRACE

'THE POWER OF GRACE TO OVERCOME EVIL WITH GOOD'

I glimpsed God and soared

A NOTE ABOUT THE CHRISTIAN SCIENCE BIBLE LESSONS

MY PRAYER helps me at School

UNIFIED IN PRAYER FOR PEACE

SUCCESS IN A BUSINESS CHALLENGE