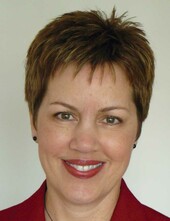 The newest Mars rover, Curiosity, landed successfully on the red planet in August. I watched with joy the celebrations of the engineers and scientists responsible for this mission when Curiosity sent its first message to Earth following the landing. That message came after the so-called “seven minutes of terror,” a succession of complex maneuvers with thrusters, parachutes, drop lines, and popping parts that would have made Rube Goldberg sit up and take notice.

As interesting as that goal may be, the aspect I find most riveting about projects like this is what they reveal about the human spirit—about what can be accomplished when one or more people have a vision of what is possible and then bring that vision to fruition. The scientific discoveries that follow are the reward for a job well done.

I love the promise of this Bible verse: “And we know that all things work together for good to them that love God, to them who are the called according to his purpose” (Romans 8:28). Regardless of whether the task at hand involves rocket science or something more terrestrial, spiritual thinkers are always called to be witnesses to the order, beauty, harmony, and perfection of God and His spiritual universe. All God’s children naturally express qualities like beauty, harmony, and order—and as we acknowledge this Christianly scientific fact, we find the expression of these qualities in everything we see and do.

We can be "rocket Scientists," prayerfully supporting the work of explorers everywhere.

Praying in support of efforts like Curiosity takes me back to my days on the Hubble Space Telescope (HST) project. I was a manager in development and maintenance of the ground system software and witnessed close-up four of the five servicing missions to the telescope by space shuttle astronauts. The stunning success of all of the missions not only kept the project alive, but extended it well beyond its expected lifetime. The original goal was 15 years; HST is now in its 23rd year of 24/7 operations. And in September, NASA released a new image from the telescope that reveals humanity’s deepest look yet into the cosmos.

I always held that the first priority of my job with HST was being a Christian Scientist, a spiritual thinker. My daily prayers then undergirded the tasks I performed at work. If “all things” are done with a sense of God, good, as our motivator and our source of creativity, then they have to “work together” and be “for good.” Eleven years with that project gave me ample opportunity to prove the worth of this approach.

Mary Baker Eddy wrote of Jesus: “He claimed no intelligence, action, nor life separate from God” (Science and Health with Key to the Scriptures, p. 136). The better we can see the natural ability everyone has to approach life as Christ Jesus did, the better we can support each other in our daily tasks.

The Mars Curiosity team comprises about 7,000 people. Think of the millions of tasks, large and small, that have been performed over the years by this team: planning, negotiating, hiring, training, inventing, designing, manufacturing, collaborating, testing, etc.

You and I can join these efforts in a very real sense. We can be “rocket Scientists,” bringing Christian Science to the fore, prayerfully supporting the work of explorers everywhere in the spirit of these words from Science and Health: “Eternal Truth is changing the universe. As mortals drop off their mental swaddling-clothes, thought expands into expression. ‘Let there be light,’ is the perpetual demand of Truth and Love, changing chaos into order and discord into the music of the spheres” (p. 255). 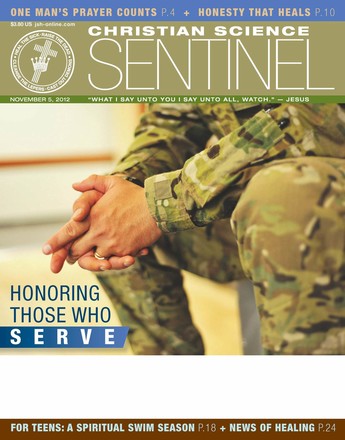 Even in war, one man's prayer counts

Prayer that defends our defenders

Honoring those who serve

The square of light

'Shaking off' the resistance

I am a healer!

Know your true self

How the Lord's Prayer saved a 9/11 survivor

By Jake Lowe with contributions from Sabra Lowe | November 2012