A couple of summers ago, before I knew about Christian Science, my wife tested positive for a type of cancer. The doctors concluded that the only possible way to save her life was to perform surgery and that even with that, there was no guarantee that she would survive. I didn’t know yet that God is entirely good and could never send disease, and I wondered why God would have allowed this to happen. (My whole life I have been a Christian, but only after becoming a Christian Scientist did I realize how little I had really understood about Christ’s Christianity.)

One Sunday afternoon, I was walking to see my wife, who was at her sister’s house that day. I was tired and running late, so I was praying to God for help in getting there. Then a car approached and stopped. I saw the driver was a white man, and no white man had ever offered me a ride in my life! I felt confident I could trust this man, and that my prayer had been answered. But I wondered why my prayers for my wife’s healing had not been answered. Little did I know that this ride would show me the truth that would make my wife free.

As we drove, I told the driver about my wife’s condition. He said it wasn’t truly part of her, because we are God’s spiritual children, and He could never let us be sick. He knows us only as perfect. I didn’t understand, but when he asked if he could pray for my wife, I didn’t think it could hurt, so I agreed. But instead of saying a prayer out loud, as I was accustomed to, he talked with me of God, Christ Jesus, the Bible, and healing. His words gave me hope and comfort, and he explained that he would pray for my wife silently.

I could tell this was truly an expression of Christly love because it felt so real. It turned out that the gentleman was a Christian Scientist, and the next day, we were in touch. He gave me a copy of Science and Health with Key to the Scriptures by Mary Baker Eddy. I began to read it. It seemed hard to understand at first, but it had a wonderful effect on me. It gave me hope as I began to realize the unreality of disease. I explained what I was learning about man as God’s perfect, spiritual creation to my wife, who was grateful to turn her thought away from pain to God’s goodness. She embraced the idea of trying Christian Science treatment, and my new Christian Science friend continued to pray for my wife.

A few weeks later, my wife and I went to the hospital for the surgery that had been scheduled. When the doctors conducted some preliminary tests, they discovered that the cancer had completely disappeared. My wife was healed! It has been over a year now, and the healing has been permanent.

My wife and I have continued to call this Christian Science friend when we have needed Christian Science treatment, and we have had many other healings. I have started attending the branch Church of Christ, Scientist, in Harare, and my wife and I read the Sentinel. Both of these resources are very helpful as I learn more of the truth about God and man.

Another time, I hurt my ankle after stepping into a hole while running. It seemed as if it might be broken. I immediately prayed to know that God’s spiritual reflection, man, is indestructible and cannot be hurt. I insisted that such an injury can’t possibly happen under God’s government, which is entirely good. A few minutes later, the pain stopped, and though the next morning there was some slight pain again, it quickly disappeared. I have never had any more trouble with that ankle.

I have experienced other healings, such as of an injured knee, and have also witnessed healings of others who have asked me to pray for them. These include healings of a toothache, difficult job situations, and inharmony among friends.

Through Christian Science, anyone can experience God’s healing power, as Christ Jesus and his disciples demonstrated. After seeing so many healings in my own experience, I am left with no doubt in my mind that divine Science is indeed the holy Comforter that Jesus promised us.

I am Tawanda’s wife and I am so glad and so honored to have my story read all over the world as a proof of the reality of God’s perfection. The healing occurred as Tawanda describes. 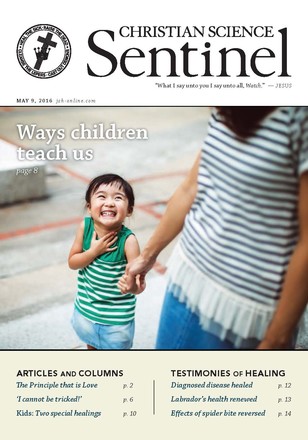 The Principle that is Love

In God’s own likeness

‘I cannot be tricked!’

By Tawanda Meki with contributions from Wayne Chisunga | May 2016

'Lo, to our widening vision dawns...'

Photograph by Scott Huffman | May 2016

Moral progress and the role we can play